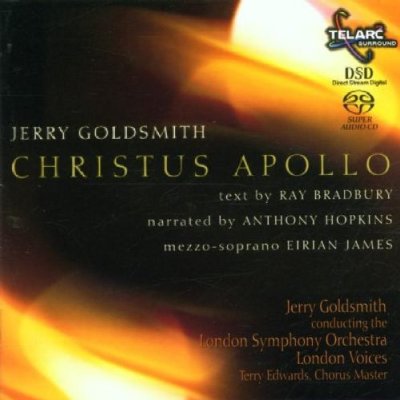 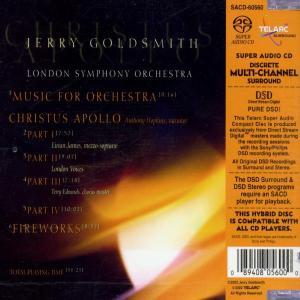 Jerry Goldsmith, composer of the scores to The Mummy, Star Trek: The Motion Picture, Air Force One, Twilight Zone: The Movie, Poltergeist, Chinatown, and many more, leads the London Symphony Orchestra and The London Voices in world premiere recordings of his concert music. Featured is Christus Apollo: Cantata Celebrating the Eighth Day of Creation and the Promise of the Ninth, set to a text by world renowned science fiction writer Ray Bradbury.

Bradbury, author of Fahrenheit 451, The Illustrated Man, The Martian Chronicles and numerous other award-winning novels, collections, and poems, wrote the text to Christus Apollo in 1969. That same year, the California Chamber Symphony asked Goldsmith to compose a cantata based on Bradbury’s text. The piece consists of four sections separated by narration. Reading the narration is Sir Anthony Hopkins, who won the Oscar for his portrayal of depraved serial killer Hannibal Lecter in Silence of the Lambs.

Goldsmith composed the compelling score to Christus Apollo using the 12-tone system. “I feel that there is a great relationship between impressionism and dodecaphonicism,” he says in the booklet notes, “and that was the musical language I wanted for Christus Apollo.” Goldsmith further comments that while “in today’s musical climate,” the 12-tone system is virtually obsolete, he found it to be a liberating way of expressing his most heartfelt feelings when he was composing thirty years ago.

Author Ray Bradbury, who was present for the recording sessions, praised Goldsmith’s setting of his text: “Music takes a thing that is already in flight and makes it fly higher, I believe,” he said. “I was very pleased with the wonderful accidents that caused me to write this long poem. But then the music comes along and says, ‘You think you’re flying? Well, listen to this. This will make you fly even higher.” Bradbury also applauded the other participants in the recording. “[Anthony] Hopkins is a fantastic actor, and I was very pleased to have him working on it. All these art forms are the collaboration of a team…All of us are working together, and we never operate on separate tracks, and we don’t let our egos get in the way. It’s a wonderful collaboration.” Radiant mezzo-soprano Eirian James brings beauty and drama to the contralto solos.

Also featured on this recording are two other concert pieces by Goldsmith. Music for Orchestra, another 12-tone piece, was written in 1970 at the request of Leonard Slatkin for the Saint Louis Symphony. The year was not a happy one for the composer, as he was in the midst of a divorce and his mother was very ill with cancer. “All of my personal turmoil – pain, anger and sorrow – went into writing Music for Orchestra…” he said. Fireworks (A Celebration of Los Angeles) was composed for the finale of Goldmith’s first concert series with the Los Angeles Philharmonic at the Hollywood Bowl in 1999. Goldsmith calls it “a grand celebration of my childhood, growing years, my years of maturity, and all the events that climaxed with my first appearance at the Hollywood Bowl.”(concordmusicgroup. com)