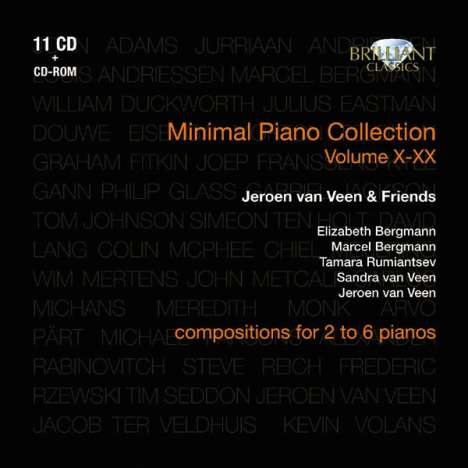 Derzeit nicht erhältlich.
Lassen Sie sich über unseren eCourier benachrichtigen, falls das Produkt bestellt werden kann.
*** Inclusive CD-ROM mit Texten,Biographien etc.
Jeroen van Veen, Sandra van Veen, Marcel Bergmann,
Elizabeth Bergmann,
The Minimal Piano Collection for one piano ended with "In C" by Terry Riley. Many of the composers on this new 11 Cd box have stated that this particular piece was a starting point for them to compose in a new way, exploring the ways that were created, the spaces between the notes, the emptiness, the freedom.

On the included Cd-ROM you can find all the biographies, background information and some sheet music. Van Veen recorded many pieces on his own using multi track technique.

This set will not only please the customers who bought the white box, but also anyone looking for interesting music from American, British, Canadian, Dutch and many more composers who wrote beautiful tonal repetitive music for two or more pianos. Many customers use the Minimal Collection to get inspired, or to work with or simply to enjoy.

Get carried away by the new black box; 854 minutes of wonderful music, enjoy the Minimal Piano Collection, let the journey begin including a few recording premieres!