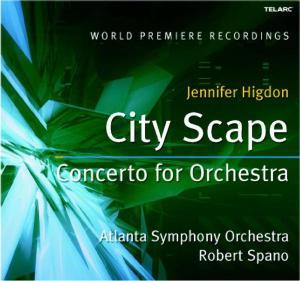 City Scape is the first work commissioned by the Atlanta Symphony Orchestra under the leadership of Robert Spano and was premiered by the orchestra in November 2002. Ms. Higdon, who spent 10 years as a child in Atlanta, describes City Scape as “a musical postcard of the city—a landscape of people, images, and energy.” The score is dedicated to Robert Spano, whom she met 18 years ago when both were at Bowling Green State University in Ohio. He was a faculty member at the time, and she was a student.

Ms. Higdon’s Concerto for Orchestra was commissioned by the Philadelphia Orchestra as part of its centennial celebration and premiered in June 2002 to enthusiastic applause and lavish praise. Following its premiere, The Philadelphia Inquirer wrote: “Concerto for Orchestra has shamelessly ecstatic climaxes, scintillating interplay among instruments, and an orchestration that delivers wave after heart-stopping wave of intoxicating color.”

“Ms. Higdon’s capacity to create music that leaps from the page has immediate appeal, yet deepens and broadens with every hearing,” says Spano. Response to Ms. Higdon’s music has grown increasingly enthusiastic, and sixty to eighty performances of her works are scheduled annually, some of which she conducts herself. Ms. Higdon earned both her master’s and doctoral degrees from the University of Pennsylvania and received an artist diploma from The Curtis Institute of Music, where she is currently a faculty member. Her composition teachers were George Crumb and Ned Rorem, who said that “if [he] had to name 12 important American composers today, Jennifer Higdon would be among the best of them.”

In February 2003, the Atlanta Symphony Orchestra and Chorus conducted by Robert Spano won three Grammy Awards for their Telarc recording of Ralph Vaughan Williams’s A Sea Symphony in all three categories in which it was nominated: Best Classical Album, Best Choral Album, and Best Engineered Album. Competing in the Best Choral Album category was a second recording by the Atlanta Symphony Orchestra and Chorus: Orff's Carmina burana conducted by the ASO's Principal Guest Conductor Donald Runnicles.

Robert Spano’s first Telarc recording with the Atlanta Symphony Orchestra was Rimsky-Korsakov’s Scheherazade and Russian Easter Overture. At the time ClassicsToday. com wrote: “I can’t imagine a more distinguished or musically appealing first release from this exciting new partnership.” Their most recent recording, released this past May, was Rainbow Body, a CD of middle- and late-20th-century American symphony works, which included Jennifer Higdon’s “blue cathedral,” and about which the Los Angeles Times wrote: “Works by four American composers—two familiar, two new—constitute a lustily played program from a resourceful ensemble led by its 42-year-old music director. Christopher Theofanidis’ ‘Rainbow Body’ and Jennifer Higdon’s ‘blue cathedral’ are craftily engaging tone poems in the quarter-hour genre. Theofanidis’ style seems more urban, Higdon’s more pastoral; both ascend Richard Straussian climaxes with ease and use melody skillfully. Spano achieves dramatic sweep and many luscious details in both Barber’s Symphony No. 1 and the Suite from Copland’s ‘Appalachian Spring.’” This recording most recently received a 2003 Grammy nomination for Best Engineered Album and Christopher Theofanidis won the UK’s Masterprize competition for his work.

The Atlanta Symphony Orchestra is the largest arts organization in the southeast and one of the youngest American orchestras to achieve international prominence. Now in its 58th season, the orchestra performs year-round in more than 250 concerts, including a 72-concert classical season, an annual pops series, and a full schedule of educational and neighborhood concerts. The orchestra also supports 200 young musicians in the Atlanta Symphony Youth Orchestra and Talent Development programs.

The Atlanta Symphony Orchestra Chorus has played an important part in the ASO’s programming since it was founded by Robert Shaw in 1970. The 200-member chorus is composed entirely of volunteers, performing large choral-symphonic works with the orchestra several times each season. In December 2003, the chorus made its Berlin Philharmonic debut under Donald Runnicles in Berlin to great acclaim, and in May will return to Carnegie Hall with the Atlanta Symphony Orchestra for their first concert there under Music Director Robert Spano in a performance of Vaughan Williams’s “A Sea Symphony.”