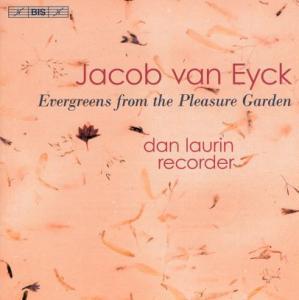 In 1999 Dan Laurin released the first complete recording of Der Fluyten Lusthof – all 10 hours and 24 minutes of it! This monumental endeavour was greeted with high praise from the reviewers, one of whom described it as »an inexhaustible reservoir of manifold and always surprising new pieces, which Laurin presents congenially with a wealth of imagination, sensitivity and virtuosity« (Crescendo). For the past couple of years he has wrestled with selecting from that recording a programme of his favourites. As he asks in his own liner notes: »How can one possibly make a selection of evergreens from a collection that in itself is one long hit parade?« While some of the chosen pieces are well-known, such as Amarilli mia Bella and Engels Nachtegaeltje ( »English Nightingale« ), others figure less often on the Top 10 lists – not that surprising considering that the complete Pleasure Garden numbers 143 compositions. The music it contains is enormously varied with everything from variations on settings of the Creed to songs about prostitutes. With this daring mixture of high and low the collection provides a snapshot of urban life in the Netherlands in the early 17th century. This quality is mirrored in Dan Laurin's selection, with 17 tunes that van Eyck adapted from the Dutch Psalter of 1566 (d'Lof-zangh Marie), from John Dowland (Excusemoy and Comagain), from German drinking songs ( »What shall we do in the evening?« ), etc.