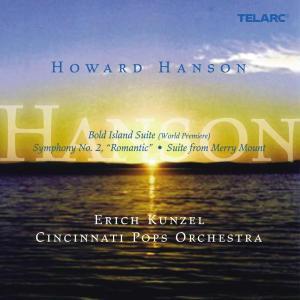 Hanson was born in Wahoo, Nebraska, in 1896 to Swedish immigrants. He began studying piano with his mother when he was six, and took up cello soon after. In 1916, he was appointed to teach at the College of the Pacific in San Jose, California, and three years later, at 22, was named dean of the College’s Conservatory of Fine Arts. In 1921, he was awarded the first American Prix de Rome, and spent the next two years in Italy, where he studied with Ottorino Respighi.

Hanson returned to the U. S. in 1923, and conducted the American premiere of his First Symphony in Rochester, New York—an event that brought him to the attention of George Eastman, founder of the music school bearing his name. Eastman invited Hanson to become the school’s director, and thus began one of the most distinguished tenures in the annals of American musical academe. During the forty years of his directorship, Hanson raised the Eastman School to the front rank of American conservatories and initiated an annual festival of American music that became one of the most important forums for American composers. Among his many awards were 36 honorary degrees, membership in the Royal Swedish Academy of Music, a Pulitzer Prize, and the George Foster Peabody Award. Hanson died in Rochester in 1981.

Hanson’s Symphony No. 2, “Romantic,” composed on commission from the Boston Symphony in 1930, is a work in three movements. This is one of seven symphonies in Hanson’s repertoire and by far his most famous. The neo-romantic symphony begins with an ascending three-note figure that is repeated as it builds to a climax. Following a horn fanfare, the principal descending theme is introduced by the brass section and then the strings. This theme returns throughout the remaining two movements, giving the entire symphony its Romantic feel.

The Merry Mount Suite was composed in 1932-1933 on commission from the Metropolitan Opera and premiered there on February 10, 1934. Despite the title of Richard L. Stokes’ libretto, based on Nathaniel Hawthorne’s short story “The Maypole of Merry Mount,” the opera’s plot, set in New England in 1625 during a conflict between the Puritans and the Cavaliers, is anything but merry.

In The Merry Mount Suite that Hanson derived from the opera, the Overture depicts the Puritans with austere modal harmonies. The Children’s Dance accompanies a portion of the Cavaliers’ Maypole revels. The Love Duet indicates Bradford’s desire for Marigold. The suite’s finale contains the Prelude to Act II, which precedes the scene on the Merry Mount, and the Maypole Dances, modeled on the wild morris dance associated with English village May Day celebrations since the 17th century.

The Bold Island Suite, commissioned by the Cleveland Orchestra in 1961, was inspired by Hanson’s annual summer retreats to Bold Island, two miles due east of the fishing village of Stonington, Maine. “Bold Island lives up to its name,” Hanson wrote, “jutting up from the sea to a height of 100 feet, with the rocky shoreline characteristic of Maine but covered with virgin pine…” This release marks the world premiere recording of this Suite.

Erich Kunzel is the most successful Billboard Classical Crossover recording artist in history. In 1991, Billboard named him the Classical Crossover Artist of the Year for an unprecedented fourth consecutive year. Of the 80 Cincinnati Pops Telarc releases, 54 have appeared on either the Classical Crossover or Classical Billboard charts. No orchestra in the world has matched that record. The Pops and Telarc won a Grammy in 1998 for Copland: Music of America, and four other recordings have earned Grammy nominations: Copland: Lincoln Portrait in 1987, A Disney Spectacular in 1989 (also Best Classical Record of the Year in Japan), The Music Man in 1991 and Amen! A Gospel Celebration in 1993. Kunzel celebrates his 40th Anniversary with the Pops during the 2005-2006 season.
(concordmusicgroup. com)