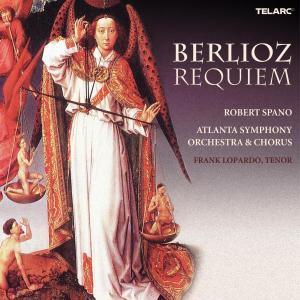 2005 Grammy Award Winner for Best Choral Performance Hector Berlioz once wrote, “If I were threatened with the destruction of everything I have created except for one work, I would beg mercy for the Requiem.” Telarc will release a recording of the Berlioz Requiem, Op. 5 by the Atlanta Symphony Orchestra and Chorus, conducted by ASO Music Director Robert Spano. This recording, featuring tenor Frank Lopardo, marks Mr. Spano’s fifth with the orchestra.

The massive work, which Berlioz wrote for large chorus, orchestra, plus four added brass ensembles, was premiered in Paris’s Church of St. Louis des Invalides in 1837 for the state funeral of the Comte de Damremont, the French governor-general of Algeria, who died in the fighting to subdue the city of Constantine. Poet Alfred de Vigny, who attended, along with the royal family, most of the court and national government, described Requiem as “strange and beautiful, wild, convulsive and painful.”

“Producing this new recording of the Berlioz Requiem was among the most exhilarating and awe-inspiring experiences of my life, and also among the most terrifying,” says Producer Elaine Martone. “Our Robert Shaw recording from 1984 (recorded nineteen years almost to the day of this new recording) lives for me as the standard by which all other performances of the piece must be judged. I am intimately aware of the details of Shaw's recording, as I was the sound editor. The emotional impact of the Requiem was immense for me at that time and remains so; I had just lost my brother in 1983. I felt deeply connected to the text and to how this text was expressed in the divine music that Berlioz penned. Now, here I was recording this work, with the same chorus and orchestra. How could we measure up?”

But the new recording proved to be a worthy match for its monumental predecessor. “At the conclusion of the sessions,” says Martone, “after the extreme ups and downs of such an endeavor, I said the following to Robert Spano, with whom it is my honor to work, Norman Mackenzie, the brilliant choral director of the volunteer Atlanta Symphony Orchestra Chorus and the excellent musicians of the Atlanta Symphony: ‘Many of you have asked why we are recording this again, when our old recording is the finest that could be. Some of you performed on that very recording! We are recording this because, without a doubt, you are the finest chorus in the world, and collectively, we have something new to say. We said it eloquently, passionately. This new performance has a reason for being.’”

Under the creative partnership of Robert Spano and Principal Guest Conductor Donald Runnicles, who began their tenure with the Atlanta Symphony Orchestra in 2001, the Atlanta Symphony Orchestra and Chorus have recorded seven albums for Telarc. Adding to the orchestra’s already impressive list of eighteen Grammy Awards, in 2003 their recording of Ralph Vaughan Williams’s A Sea Symphony conducted by Robert Spano won three Grammy Awards, and Carl Orff’s Carmina Burana, conducted by Donald Runnicles, won a Grammy nomination. During the upcoming season Telarc will record the Atlanta Symphony Orchestra and Chorus in two new recordings: Mozart’s Requiem with Donald Runnicles and an SACD of contemporary music by Robert Spano, including Adams’s On the Transmigration of Souls and world premiere recordings of the new works by Christopher Theofanidis and David Del Tredici.

As the Atlanta Symphony Orchestra approaches its sixtieth anniversary year in 2004-05, it has distinguished itself as one of America’s major orchestras, serving as a cornerstone for artistic development in the Southeast. Year-round it performs more than 250 concerts, and last season gave an acclaimed concert at Carnegie Hall.

Well known for the beauty, precision, and expressive qualities of its singing, the 200-member, all-volunteer Atlanta Symphony Orchestra Chorus has been an important part of the Atlanta Symphony Orchestra’s programming since it was founded in 1970 by Robert Shaw, the man acknowledged as the greatest chorus master of the twentieth century. The chorus is currently led by Director of Choruses Norman Mackenzie who worked with Robert Shaw for fourteen years before succeeding him in Atlanta. The chorus recently scored a major success with their Berlin Philharmonic debut in a performance of Britten’s War Requiem under Donald Runnicles in Berlin, where they were applauded not only by the audience but also by the musicians of the Berlin Philharmonic themselves.

Internationally heralded as one of America’s outstanding conductors, Robert Spano is recognized not only for leading vital, musically distinguished performances, but also for the breadth of his repertoire and his imaginative programming. He has conducted nearly every major North American orchestra, and is also a distinguished conductor of opera. His European engagements have included appearances at the Royal Opera at Covent Garden, the Welsh National Opera, Ensemble Intercontemporain, and the Orchestra Filarmonica della Scala.

New York-born Frank Lopardo, is regarded as one of the leading lyric tenors of our day. He performs on a regular basis with major opera companies and orchestras throughout the world. Among his many operatic roles, those he has made his own include Edgardo in Lucia di Lammermoor, the Duke in Rigoletto, Alfredo in La traviata, and Lenski in Eugene Onegin. He has also won acclaim in the Mozart repertoire and the bel canto roles of Bellini, Donizetti, and Rossini.