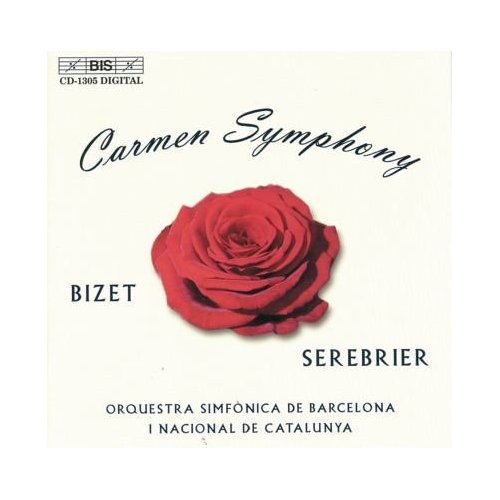 If great music is music that defies a definitive performance, then Carmen readily qualifies. There is no other opera that can boast as many tunes that are familiar even to people who have never seen it performed. And probably no other opera has been subjected to such numerous arrangements.

As a conductor José Serebrier has never felt that existing transcriptions do justice to the opera score. As a composer he has the necessary insights to successfully transport Carmen from the opera stage to the concert platform. His ‘Carmen Symphony‹ presents Bizet’s inspired vision of Spain in wonderful colours. Clearing away the cobwebs of the orchestral tradition makes Serebrier’s Carmen as alive and as provocative as she was when she made her first appearance at the Paris Opera. The disc is completed by the two ‘L’arlésienne‹ suites and the whole is performed with an impeccable sense of idiom by the splendid Barcelona Symphony Orchestra. In fact, the combination of conductor, orchestra and music was spicy enough to secure an award as Best Classical Album of the Year at the 5th Annual Latin Grammy Awards Ceremony in 2004.

»A very attractive package indeed, one that certainly justifies yet another version of this oft-recorded music.«
Classicstoday. com

»It's rare that a recording encourages you to listen more attentively to music you thought you knew backwards.«
International Record Review June 2004