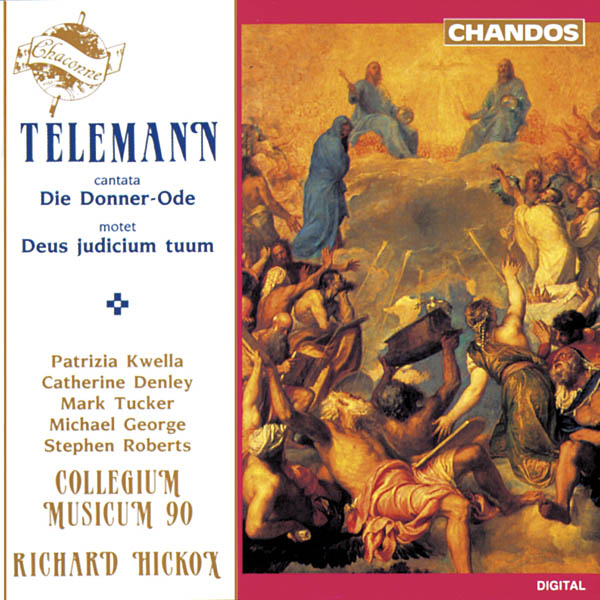 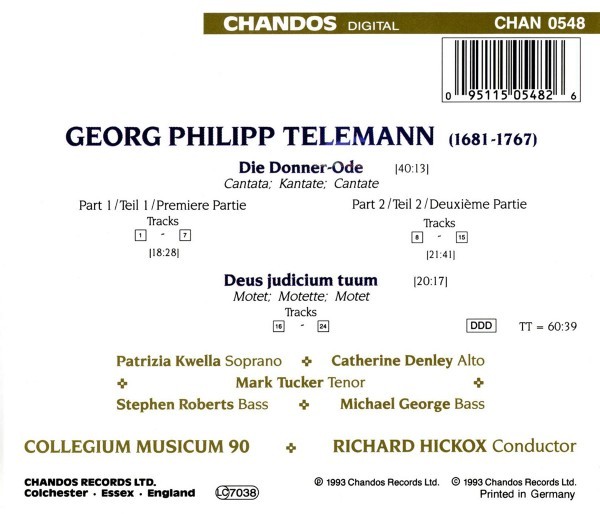 »Telemann’s dramatic cantata Die Donner-Ode (The Thunder Ode) was a product of his extraordinarily creative old age. The first part is based on paraphrases of Psalms 8 and 29, which celebrate the majesty and strength of God, and was written in 1756 to commemorate the Lisbon earthquake. To modern sensibilities, the triumphalism of the work might seem to be a prime example of Panglossian Enlightenment complacency. But it is the persuasiveness and skill of that very triumphalism that make this a stunning piece of music- indeed, it proved popular enough for Telemann to add a second section. Telemann makes imaginative use of the timpani and brass delineating these thunderous Psalms, particularly in the zestful opening chorus (reprised to great dramatic effect at the end of the ode) and in the powerful duet between the two basses (sonorously sung by Stephen Roberts and Michael George). Richard Hickox extracts typically lively and incisive playing from Collegium Musicum 90, with strong performances by the soloists and choir, so Telemann’s joyful optimism here seems to anticipate Haydn. Also on this disc is the earlier Psalm setting Deus judicium tuum, written in the French manner for a Parisian audience. This is a sparser and lighter work, but still characteristically inventive.« William Humphreys-Jones, BBC Music Magazine ***** Performance ***** Sound