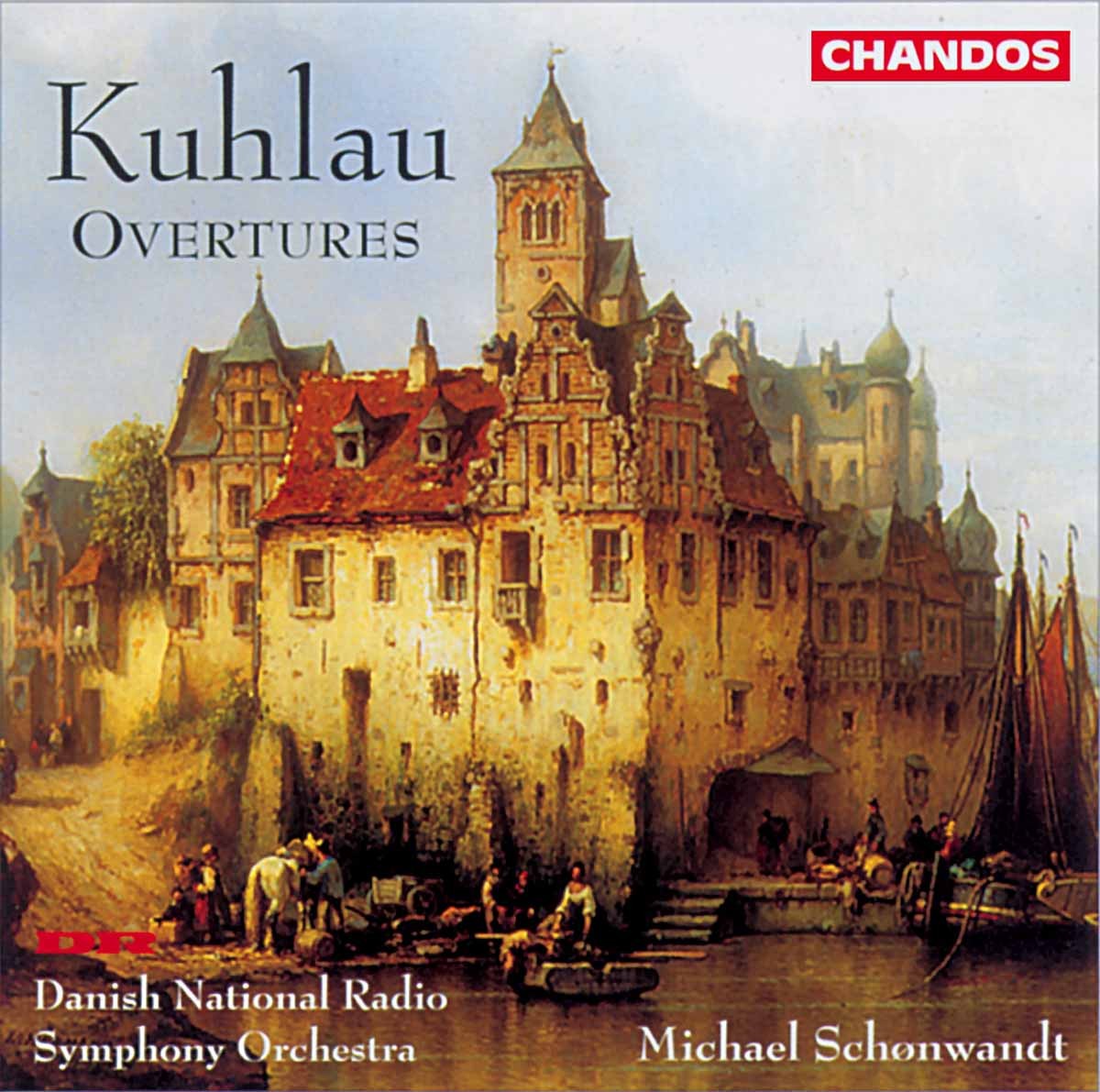 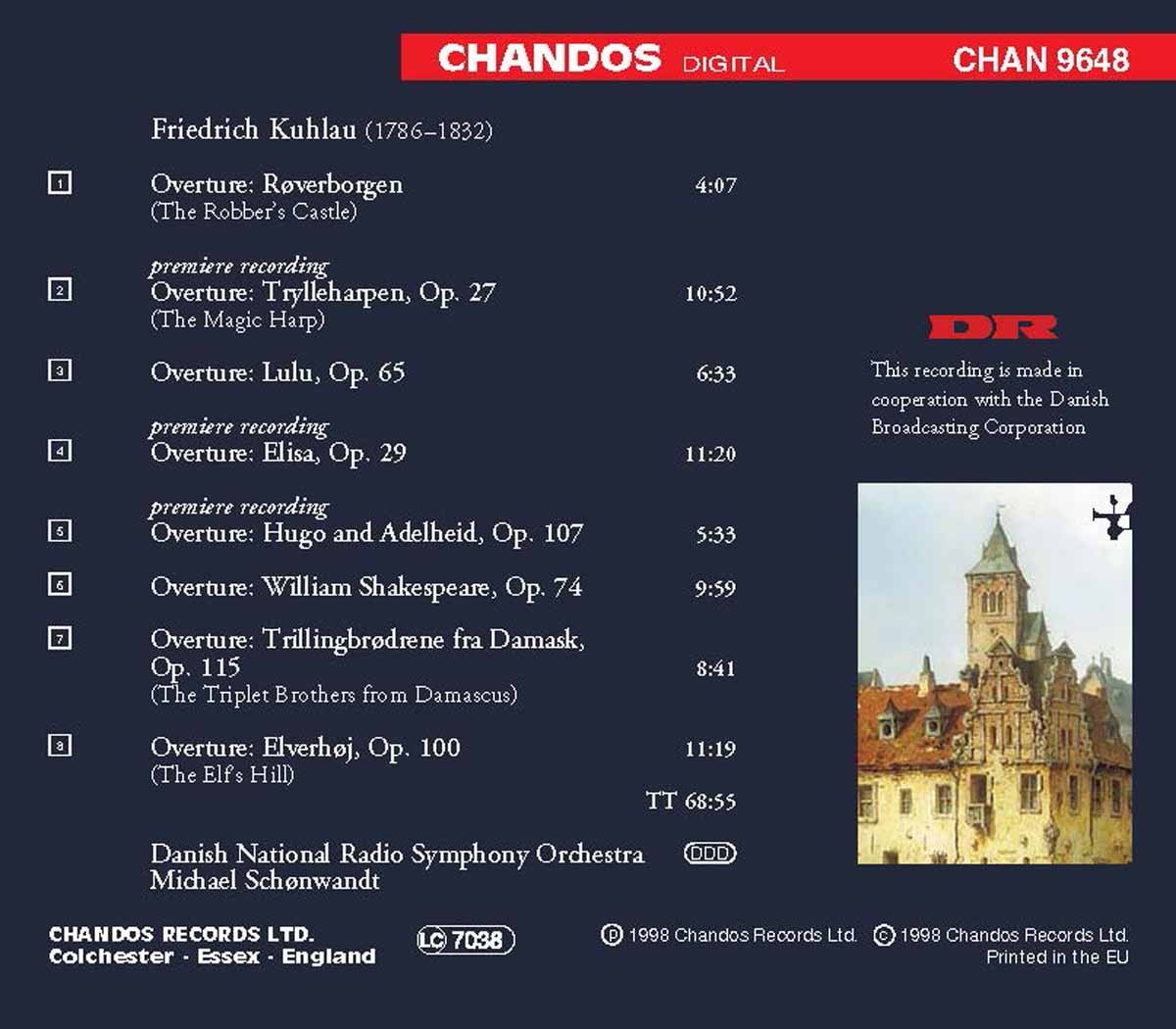 Though known today principally for his many works for piano and flute, Kuhlau’s dramatic works are equally as important to Danish music history. Kuhlau’s opera overtures stretch stylistically from the Classical style, the main models being Mozart, Cherubini and Paer, to a more Romantic style, influenced by Beethoven, Rossini and Weber. Kuhlau made several journeys abroad and was well acquainted with different national trends in music, and consequently his works are of a cosmopolitan nature. He stands as the man who added a modern touch to Danish musical life, introducing Beethoven’s music for example. An unusual aspect of Kuhlau’s composing is his ’model’ or ’parody’ technique in which other composers’ music lay as a foundation for his own, which he then worked out in his own personal way. Røverborgen (The Robber’s Castle, 1814) won Kuhlau great success on the Danish contemporary scene. Its merry atmosphere is reflected in the sparkling presto overture of which the first theme is an imitation of a similar theme in the overture to Paer’s opera / fuorusciti. Kuhlau’s second opera Trylleharpen (The Magic Harp, 1817) was wrapped in scandal. It was thought, erroneously, that the libretto had been stolen from a German piece. The overture is reminiscent of Cherubini’s Lodoïska. The overture to the lyric drama Elisa or Friendship and Love (1820) heralds a more romantic style and contains musical references to the opera, a device now being used by Kuhlau. The main Allegro theme is very similar to that of Paer’s Sargino, also used by Rossini in his L’italiana in Algeria. Kuhlau’s chief operatic work Lulu (1824) is based on the fairy-tale Lulu, oder Die Zauberflöte, from C. M Wieland’s collection, Dschinnistan - the same source that Mozart used. There is no slow introduction to the overture and it contains three indiviual themes the second and third refering to to Lulu (woodwind accompanied by cello obbligato) and Sidi (horn solo) respectively. The Danish romantic drama William Shakespeare (1826) is predominatly inspired by Beethoven with strong echoes of Mendelssohn and Weber. Kuhlau’s last opera Hugo and Adelheid (1827) is again influenced by Beethoven, particularly Fidelo and Prometheus. Elverhøj (The Elf’s Hill, 1828), Kuhlau’s most famous work, was written as incidental music to a romantic festive play for a royal wedding. The overture concludes with the tune ’Kong Christian stod ved højen mast’ which became the Danish National Anthem. Kuhlau’s last work for theatre was the incidental music to the comedy Trillingbrødrene fra Damask (The Triplet Brothers from Damask, 1830). Most of the music for the overture was taken from the play as it was written in haste, and it contains the then popular ’Turkish’ effects.

"... This delightful album, brilliantly played and recorded, offers all seven of Kuhlau’s opera overtures, plus his most famous work, the overture to the Danish play, Elverhoj, Elf’s Hill..." **** The Guardian - 13 November 1998

"The Royal Danish Orchestra under Michael Schønwandt give these overtures all they’ve got and the result is an enormously enjoyable, informative and very recommendable album of little known repertoire. Excellent fun and just right as a Christmas present for someone who has everything - or for one-upmanship in a quiz!..." Roderick Swanston - Classic CD - October 1998