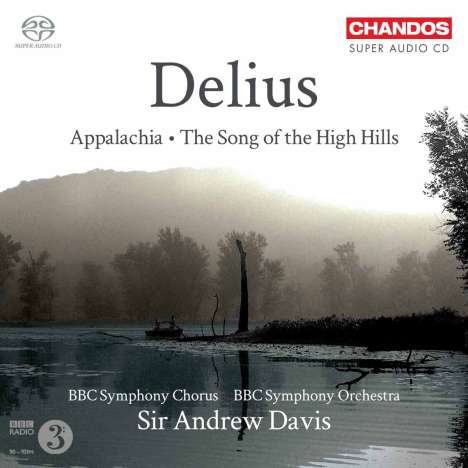 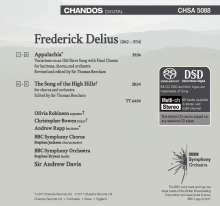 This recording presents two comparatively rarely heard but striking works by Frederick Delius. Both are prime examples of his highly individual and ground-breaking use of voices in predominantly orchestral works.

In Appalachia, the sombre mood reflects the fate that overcame many black slaves along the Mississippi River, who were sold by one cotton planter to another, simply uprooted from loved ones, and transported to a different place – the practice is the origin of the expression »being sold down the river«. The inspiration for the work came to Delius when he was working on an orange plantation in Florida as a young man, and from across the water in the distance heard the singing of black farm labourers. Many year later, Delius recollected: »they showed a truly wonderful sense of musicianship and harmonic resource in the instinctive way in which they treated a melody, and hearing their singing in such romantic surroundings it was then and there that I first felt the urge to express myself in music.«

The inspiration for The Song of the High Hills was the mountains of Norway, which Delius regarded as his spiritual home. In 1911, he started composing the tone poem in which he sought to capture the impression created by a still summer night in the Norwegian mountains. Completed the following year, it is scored for large orchestra and chorus which, as in Appalachia, plays an integral part in the work, although the singing here is entirely wordless. To emphasise their role in providing colour to the texture, the singers were directed to remain seated throughout, and to »sing on the vowel only which will produce the richest tone possible«. Delius considered this not only one of his best works, but one of the works in which he had expressed himself most completely.

»Sir Andrew Davis conducts evocative performances of two of Delius's most poetic works. Appalachia is an exquisite set of variations on an old slave song. Song of the High Hills enshrines his love of Norway's mountains.« **** Michael Kennedy – The Sunday Telegraph – 18 September 2011

»...I have no problem recommending this new recording for its many complementary virtues... Those ... who are moved by Delius's transcendant music and by sheer magnificence of orchestral and choral execution-and engineering that supports it-will certainlywant to hear this SACD.« Ronald E Grames –
Fanfare – September-October 2011