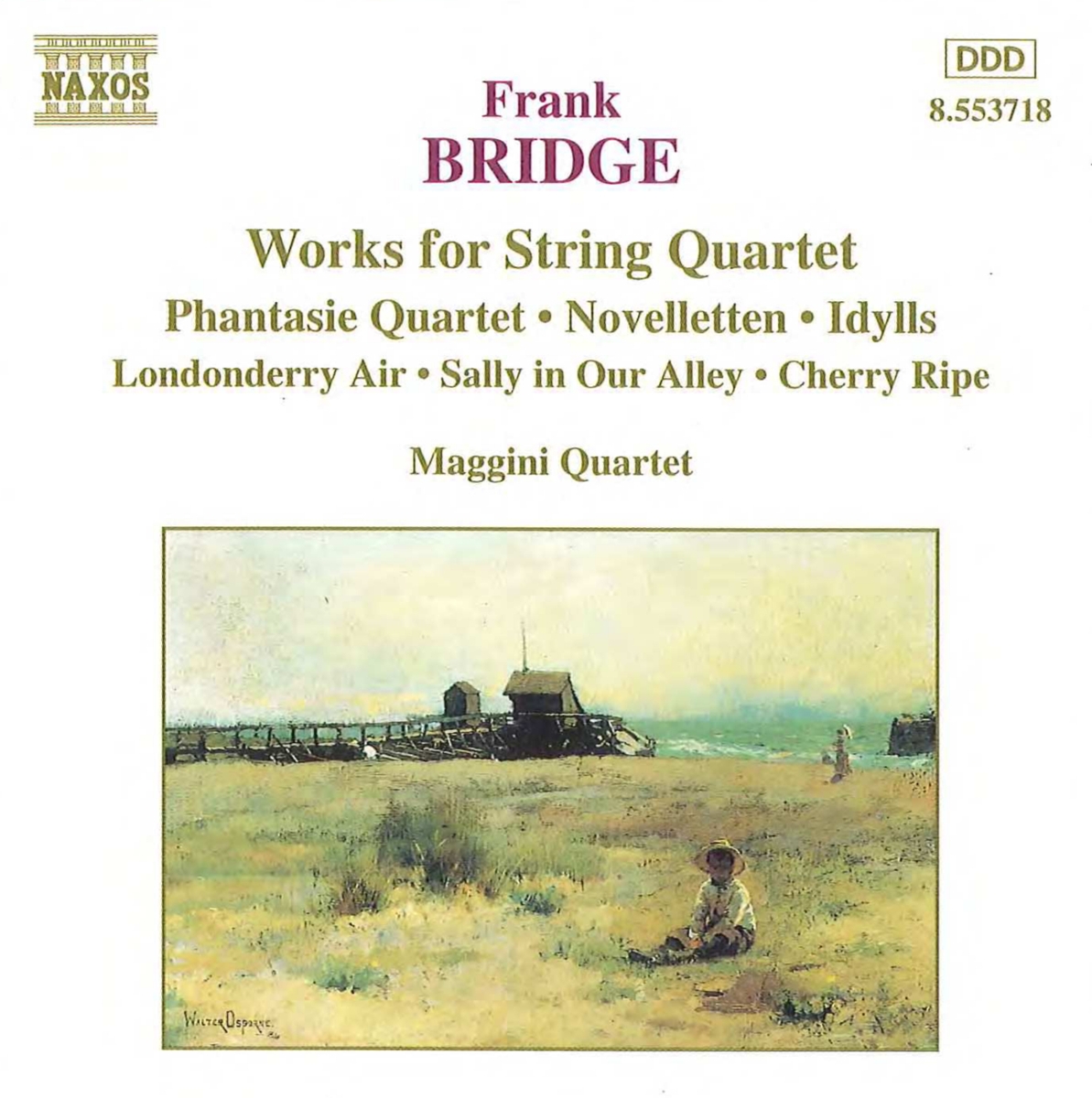 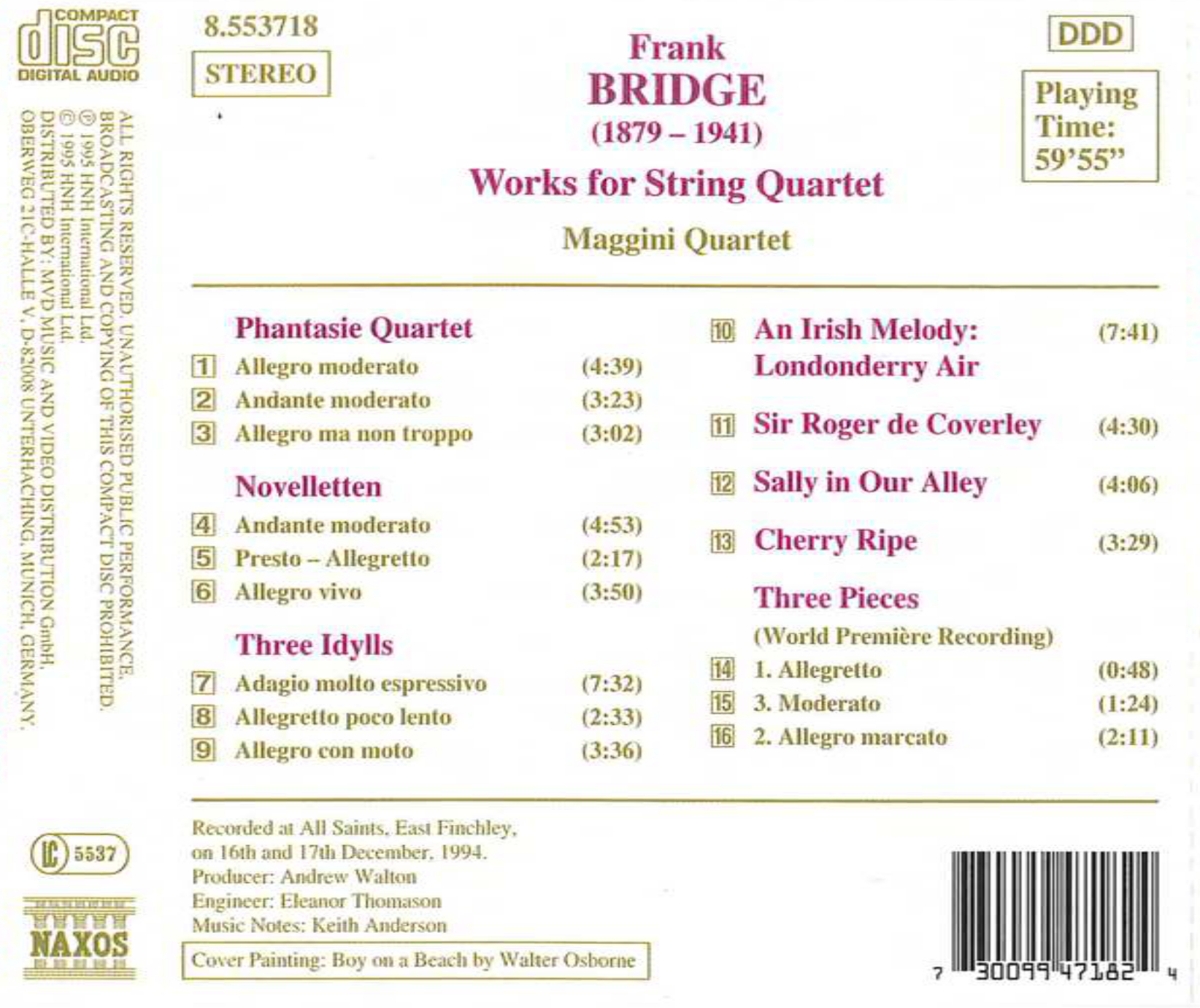 Bewertung:
umgehend lieferbar, Bestand beim Lieferanten vorhanden
EUR 9,99*
Since Frank Bridge's death in 1941 his music has been unduly neglected, although his name is at least recalled in the homage paid him by his pupil Benjamin Britten in his Variations on a Theme of Frank Bridge, using a theme from the second of the Three Idylls. Bridge was born in Brighton in 1879 and studied violin and composition at the Royal College of Music in London, continuing the latter study under Stanford. As a performer he established a place for himself as a violist, in particular in the English String Quartet, and as a conductor with the New Symphony Orchestra, at Covent Garden and in other important engagements with major orchestras in the English capital.
As a composer Bridge developed a voice of some originality. A series of chamber works and songs won a ready public in the early years of the twentieth century, with larger scale orchestral compositions, symphonic poems and suites. His style developed in a radical way after the 1914-18 war, the change marked by his Piano Sonata, written between 1921 and 1924. The influence of Schoenberg's pupil Alban Berg becomes apparent, reminding us that Britten had once hoped to be allowed to study with Berg. Bridge, however, retains an English element in his harmony and musical language, although the new form that his music had taken isolated him from the insular traditions of many of his established contemporaries.
The Phantasie Quartet, in F minor, was written in 1905 in response to Walter Wilson Cobbett, compiler of the useful Cyclopaedia of Chamber Music and an enthusiastic amateur violinist, owner of a Guadagnini instrument and other valuable violins. In 1905 he established a prize for a phantasy string quartet, analogous to the Elizabethan fancy or fantasy, a single-movement sectional work, then for consort of viols. The first quartet prize was won by W. Y. Hurlstone and Bridge won a prize in 1907 for his Phantasy Trio, while other winners included Armstrong Gibbs, Herbert Howells and John Ireland. Bridge entered his Phantasy Piano Quartet of 1910 for the same award. The essential element in the traditional form that Cobbett was seeking to encourage was the use of a single movement with related but contrasting sections.
The first section of the F minor Quartet is marked Allegro moderato and opens emphatically before the march-like tread of the first theme, leading to idyllic music that must recall the contemporary idiom of Ravel in texture, contour and feeling, in particular the latter's Introduction and Allegro in its octave doublings of melody. The Andante moderato has stronger suggestions of English idiom in its opening, while the final section, Allegro ma non troppo, allows an element of romanticism that is remote from the world of Elizabethan consort music. Cobbett's chosen antiquarian title by now had other connotations, although the general language remains English.
Novelletten, a title that must recall Schumann, were written in 1904, but foreshadow something of the path Bridge's harmonic idiom was to take. The first has particular interest in its string-writing and in its shifts of tonality, moving in its gentle opening and conclusion. Plucked notes start the second piece, a Presto, with its chromaticism and tender relaxation of tension at its heart. The third of the Novelletten opens firmly, an Allegro vivo that finds time to recall the material of the other two movements before ending as it began.
The Three Idylls were written in 1906, the year after the Phantasie String Quartet. The initial Adagio molto espressivo offers an intense C sharp minor, dark-hued and melancholy, moving into a serene E major, before exploring the tonic major in a mood of gentler lyricism. As always Bridge handles the textures of the string quartet with the mastery to be expected of a musician familiar also as a player with the medium and its repertoire. The first Idyll ends as it began, in a mood of sombre nostalgia.
This is only partially lightened by the second Idyll, marked Allegretto poco lento, although the music moves forward now into gentle lyricism. The final Allegro con moto is cheerful in feeling, once again suggesting the idiom of Ravel, to whom Bridge may be seen as a contemporary and independent counterpart at this stage in his career.
The Irish Melody, popularly known in England as the Londonderry Air, is treated imaginatively in the string quartet version composed by Bridge in 1908. Here the well known melody only gradually emerges, appearing towards the end of the work, although it has been foreshadowed in the intricate interplay that has gone before. Sir Roger de Coverley, written in 1922 and also existing in a version for string orchestra, makes use of a similar technique, in a lighter vein, the fiddle tune answered by the lower strings in an interwoven texture. Sir Roger does not have it entirely his own way, since Auld Lang Syne appears eventually as a counter-melody, in witty and skilful counterpoint. 1916 had brought two other compositions based on traditional tunes, Sally in Our Alley and Cherry Ripe. The first of these allows the melody initial prominence, with harmonies of increasing intensity, while Cherry Ripe offers a cheerful contrast of mood, its melody initially suggested and fragmentarily interwoven before it is finally heard.
The Three Pieces, here recorded for the first time, start with the briefest Allegretto, followed by the third of the set, marked Moderato, almost as short and gently evocative in Bridge's earlier style. These are followed by the second of the group, now placed third, an Allegro marcato, in the manner of a syncopated light music introduction to a seaside entertainment, an elegant touch of Brighton Pier .