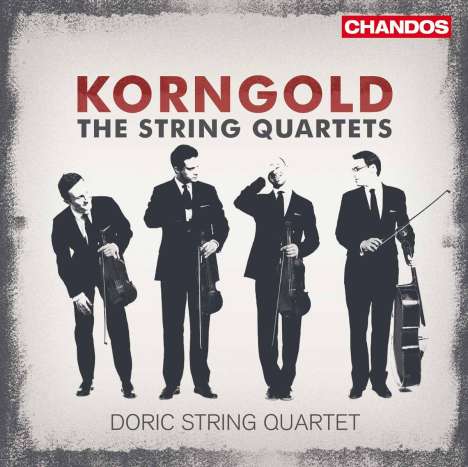 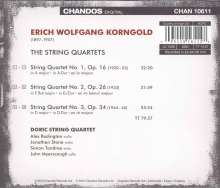 The Doric String Quartet is now firmly established as one of the outstanding quartets of its generation. Now in its eleventh season, it regularly performs at major festivals and venues throughout the UK as well as abroad in continental Europe and Asia. This is the Quartet’s debut CD on Chandos as exclusive artists.

Most famous for his lushly romantic film scores, Erich Wolfgang Korngold wrote a quantity of music for the concert hall, the stage, as well as three highly individual string quartets between the years 1920 and 1945. Korngold was one of the great prodigies in the history of classical music, and by the time he started work on his First String Quartet (completed 1923), he had already written what many consider to be his magnum opus, the opera Die tote Stadt.

The three quartets range widely in style and are all very appealing. The First is notable for its strikingly adventurous harmony, the Second (1933) for its sheer wealth of melodic appeal, whilst the Third (1945) uses material from his film scores, and is as varied and dramatic as many of the films which he scored.

‘This is an ensemble, young but mature of insight, that plays Haydn’s music with spirit, illuminating its blend of wit and sophistication, grace and vivacity, cunning and seemingly effortless spontaneity… The Doric’s performances, without exaggeration but with just the right degree of elucidation, revealed the music’s extraordinary originality and the way that Haydn can explore the potential of his thematic material so thoroughly yet so artlessly… Unequivocally, these were performances of terrific panache and perception, seeming to get right under the skin of Haydn’s creative genius.’ - The Sunday Telegraph, 18 January 2009

"There’s very little competition for this music, which is a shame because these are excellent quartets... These quartets are quite difficult to play, the first especially, which features frequent changes of tempo, often within a few bars. The Doric players handle all of these with astonishing ease and naturalness... Excellent sonics complement this obvious first choice for this music. If you don’t know these pieces, you should. There’s much more to Korngold than you might think--check out the wonderfully spiky scherzo in the Third quartet for a particularly bracing "fact check" on his theoretically unabashedly late-Romantic style. ... An important release for chamber music devotees, and a terrific example of first-rate quartet playing. David Hurwitz - ClassicsToday. com - 29 May 2011

“...The performances and interpretations are the last word in sympathy, precision, and beauty of tone. This release is Exhibit A in defence of the intelligence of a composer too often maligned for writing music that people can actually enjoy.” Don O’Connor – American Record Guide – March / April 2011