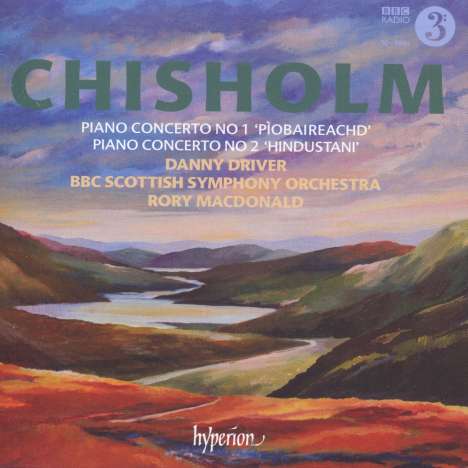 umgehend lieferbar, Bestand beim Lieferanten vorhanden
EUR 19,99*
Versandkosten
Who was Erik Chisholm? A fascinating musical polymath: composer, conductor and performer, and collector of folk music from his native Scotland. Born in Glasgow in 1904, his attitude to music was progressive, looking towards central European modernism (he was dubbed ‘MacBartók’). Chisholm’s understanding and mastery of the piano—he performed the Scottish premieres of Rachmaninov’s Third and Bartók’s First Concertos—is evident in his two concertos. The first, ‘Pìobaireachd’, literally ‘pipe music’—that of the classical Highland bagpipes—uses these sinuous traditional themes to thrilling effect in a work that’s both exotic and lyrical; the ‘Hindustani’ concerto was inspired by Chisholm’s posting to the Far East during the Second World War and friendship with Sorabji, and is based upon a series of ragas.

Hyperion rising star Danny Driver is the scintillating soloist alongside the BBC Scottish Symphony Orchestra and Rory Macdonald in these captivatingly original works.