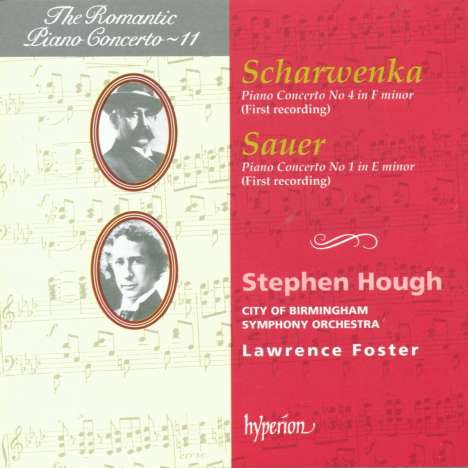 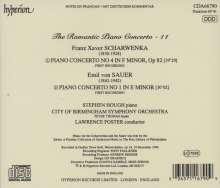 Scharwenka was one of the most beloved of musical figures during the late nineteenth and early twentieth centuries. His Concerto No 4 in F minor, written in 1908, was greeted at its premiere with astonishing enthusiasm from an audience »which may, without exaggeration, be said to have included almost every pianist – virtuoso, teacher and student – in Berlin«. Two years later Scharwenka was to give his first performance of the work at a concert in New York. The conductor was Gustav Mahler. Emil Von Sauer's compositions have suffered from an even greater neglect, wholly unjustifiable, than Scharwenka's. The E minor Concerto had already gone through eight printings by 1908 when he performed it in Chicago: »It was no matter for astonishment that when the pianist-composer had brought the work to its conclusion a storm of genuine enthusiasm should seep the house from gallery to floor … Mr Sauer represents a school of piano-playing that has all but vanished. The pianists who are now moulding the taste of the public are, one and all, engaged in the questionable task of reproducing with their instruments effects that are orchestral … but in the meantime we are in danger of forgetting the joys of pure pianism. To such joys Mr Sauer has awakened us.« Two first recordings, played by one of the greatest virtuoso pianists today.

»Stephen Hough's punchy, glittering account [of the Scharwenka] is electrifying, his precision and rhythmic élan, especially in the terrifying finale, is beyond praise« (International Record Review)

»Virtuosity as impish as it is magisterial ... [he] wings his way through every good-humoured page with a poetic and technical zest that takes us back to the great pianists of the past; to a golden age of piano playing« (BBC)

»The pianism of Hough leaves one breathless. His technique is fabulous, and tasteful phrasing wonderfully sensitive to the needs of the period … Musts for fans of 19th-century virtuosity« (In Tune)