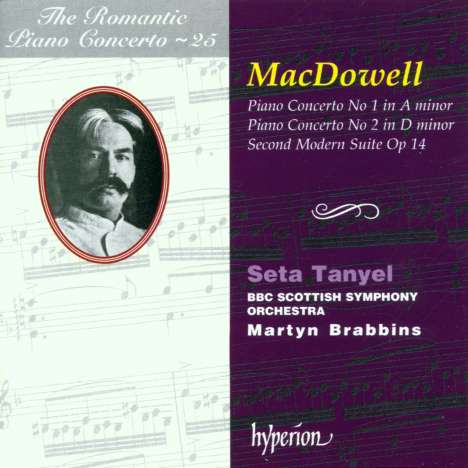 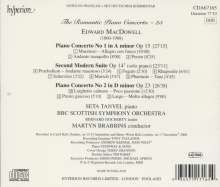 The 'Romantic Piano Concerto' reaches its quarter century with two concertos that suffer their neglect with the least justification; indeed it's hard to see why MacDowell's Second in particular isn't up there with the Grieg as one of the most-loved nineteenth-century concertos.

Edward MacDowell was the USA's first truly major composer, but like his compatriots of the period he studied in Europe and his music stems from the nineteenth-century Germanic tradition. Both concertos are early works and the First was written while MacDowell was a student; it came to the attention of Liszt who thought very highly of it and arranged for its publication, and thus launched MacDowell's career. The composer was a very fine pianist and this shows throughout both works, which abound in virtuosity clearly designed for maximum impact. This coupled with MacDowell's melodic flair and a propensity for Scherzo-like movements results in two of the most immediately appealing works to have graced this series.

The CD is completed with the 'Second Modern Suite' for solo piano ('modern' as opposed to Baroque), a work contemporary with the concertos where the composer creates a large-scale piece, which while less integrated than a sonata is nevertheless more than a collection of character pieces.

We are delighted to welcome Seta Tanyel, who has already made many acclaimed recordings of neglected Romantic repertoire by Scharwenka and Moszkowski, on her debut with Hyperion.

'Vol. 25 in this Hyperion series deserves to become a best-seller' (Hi-Fi News)