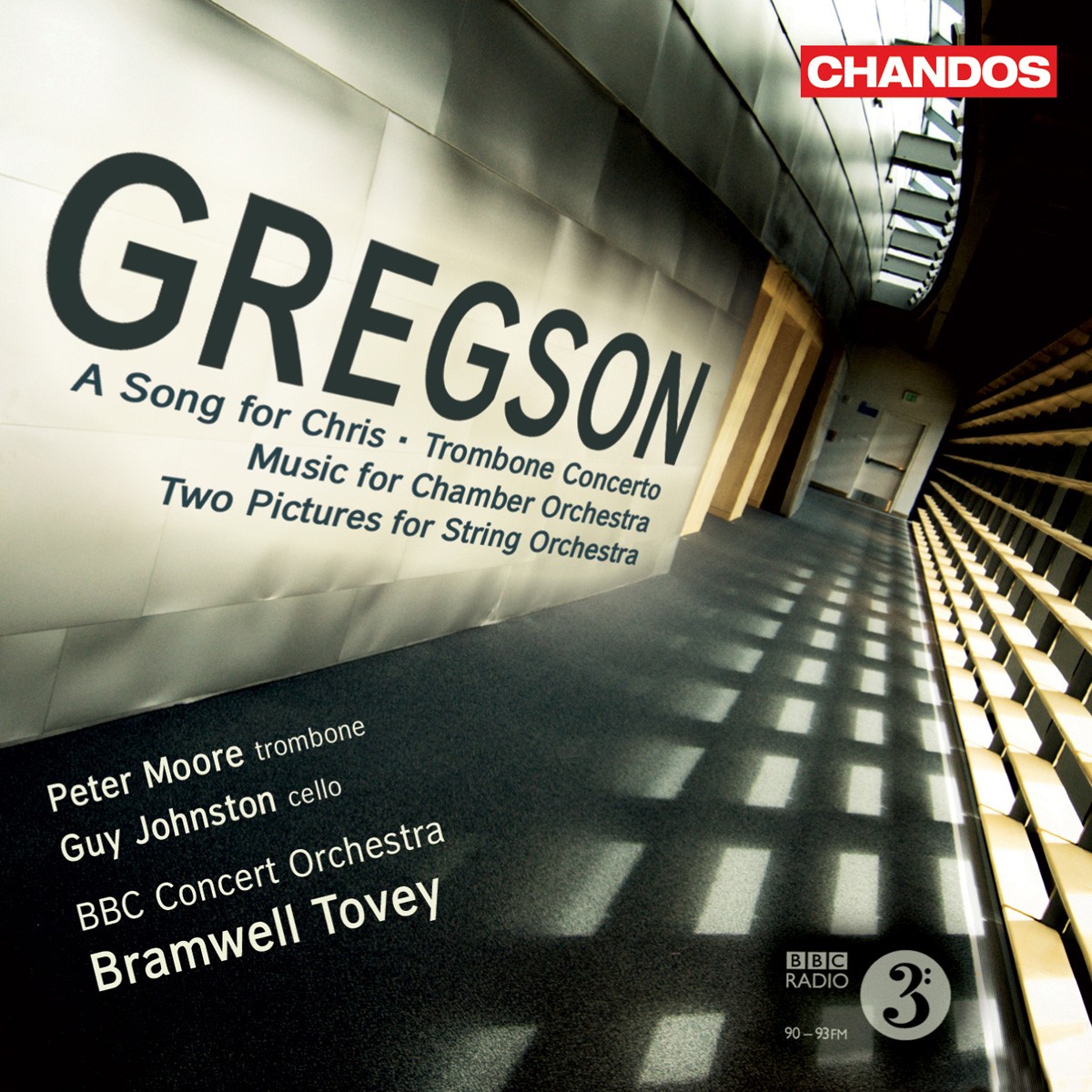 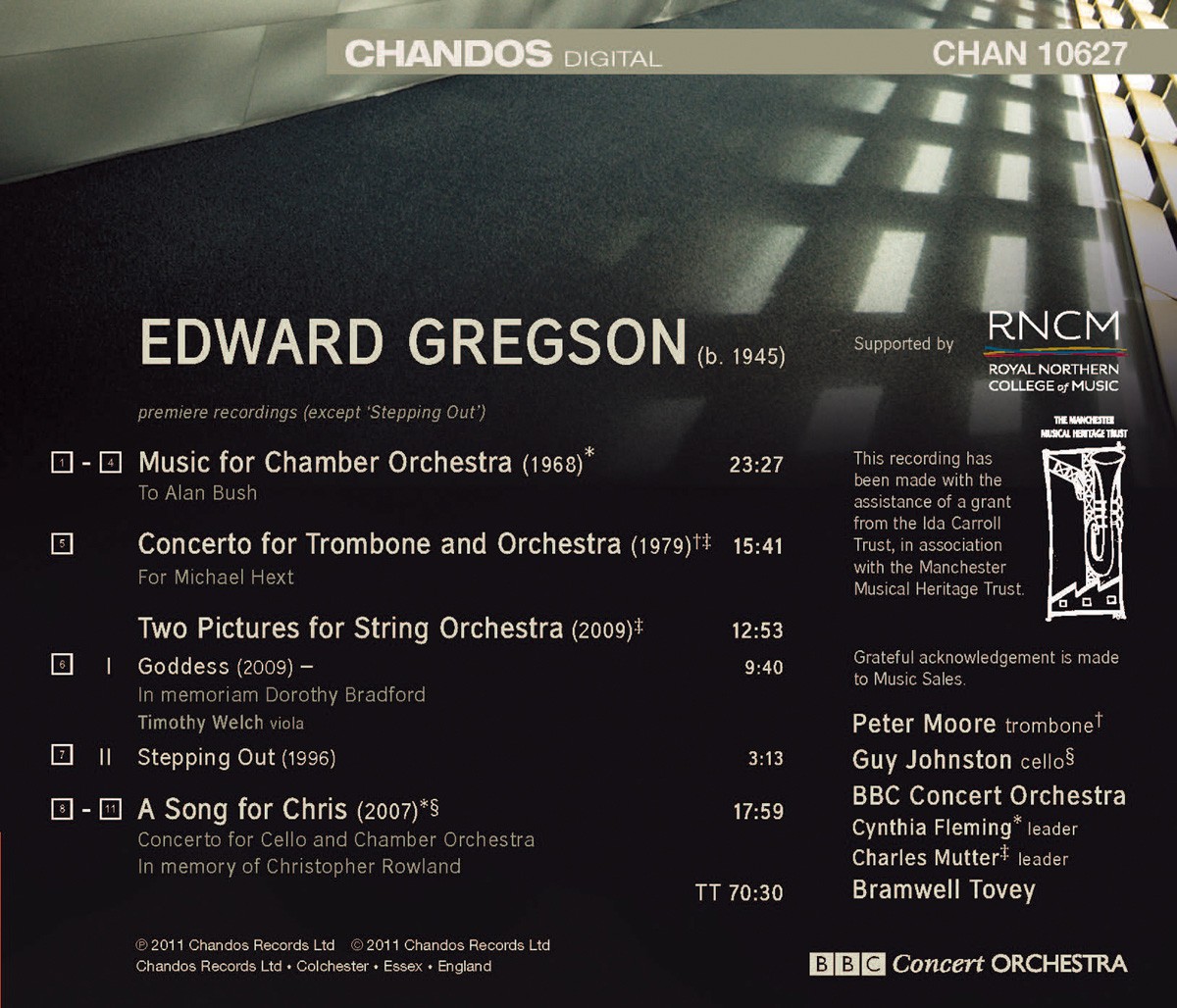 Edward Gregson is one of Britain’s most versatile composers, whose music has been performed, broadcast, and recorded worldwide. This is the third volume in Chandos’ series devoted to concertos by Gregson, of whom International Record Review said: ‘He [Gregson] speaks to a large audience, without sacrificing integrity. With superb performances and sound… this [CHAN 10105] is a release of vital, attractive and immensely likeable music.’ The life-long fascination which Gregson has had with the concerto form began early but as he was brought up in a Salvationist family it was inevitable that the brilliant sound of the British brass band should play an important role in the early years of his composing career. This led to a parallel universe of musical experiences: ‘On the one hand I was playing music by some fine brass band composers and on the other being absorbed in the music of Bartók, Prokofiev, Hindemith, Webern, Stravinsky, Shostakovich, Tippett, and others.’ It is a musical environment that has greatly influenced his compositional style to this day.

One of the key works on this release is the Concerto for Trombone and Orchestra. The solo part is here performed by Peter Moore, who at the age of twelve years was the youngest contestant ever to win BBC’s Young Musician of the Year award in 2008. Gregson describes the writing for the soloist as ‘virtuosic, encompassing the whole range of the instrument [trombone], but it also exploits the rather beautiful lyrical sound of which the instrument is capable’. Gregson’s most recent commission – A Song for Chris, a concerto for cello and chamber orchestra for Manchester Camerata – was premiered at the 2007 Royal Northern College of Music International Cello Festival.

Here, the solo part is played by Guy Johnston who was voted BBC’s Young Musician of the Year in 2000 and went on to receive numerous awards, including the BRIT award for Best British Newcomer, the SHELL / LSO Gerald MacDonald Prize, and the Musiciens Bénévoles Fund Award. Since making an extraordinary debut at the BBC Proms performing Elgar’s Cello Concerto with the BBC Symphony Orchestra under Leonard Slatkin, he has become a fast-rising star on the international stage and enjoyed successes with major symphony orchestras across Europe and in Japan.

“…He [Peter Moore] seems to have it all: consistently full yet clear tone quality, fine technical skill and easy high register. He sports a variety of articulation, and he plays with musical understanding and heartfelt expression… Fine recorded sound alloaws us to hear details of cellist Johnston’s tone, which sounds especially vibrant in the unaccompanied moments …” Barry Kilpatrick – American Record Guide – 30 September 2011

"...This fine cross-section of orchestral works by Edward Gregson is equally finely executed by that hard-working group, the BBC Concert Orchestra, in really excellent form here under Bramwell Tovey. Chandos’s recording quality is superb, the Watford Colosseum, its comfortable acoustic much-loved by recording engineers and listeners for many years, allowing the sound to expand comfortably... All very highly recommended." Peter Joelson - Classicalsource. com