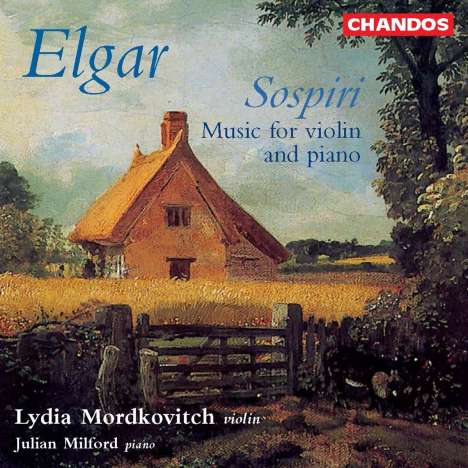 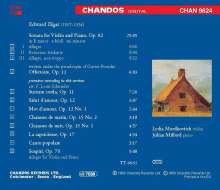 This album combines some of Elgar’s most popular works for violin and piano with some much rarer repertoire.

Elgar’s music for violin and piano spans the whole of his creative life. The violin was his own instrument which he began learning at the age of twelve, and as a young man he made his living by both playing and teaching the instrument.

The Violin Sonata was composed at Brinkwells, an isolated cottage in East Sussex, in 1918. The isolation was essential for his creative spirit, and the result was this very beautiful, nostalgic work. The first movement is a highly concentrated piece, reminiscent of Brahms in its knotty vigour and contains, in Ernest Newman’s words, ’a surprising weight of thought and feeling’. The central movement, ’fantastic and curious’ as Elgar says, contains one of those great Elgarian sweeping tunes in the middle section, of which the composer said ’...they say it’s good or better than anything I have done in the expressive way...’. The finale, written on learning of the death of a friend, is another of his beautifully haunting movements. It is very broad and soothing, the emotional climax being reached by the re-statement of the ’big tune’ of the second movement.

The popular Salut d’amor was completed in July 1888, two months before he married his wife, Alice Roberts, to whom it is dedicated. Schott bought the piece for a nominal sum, but Elgar soon regretted it as it sold 3000 copies in January 1897 alone! Elgar followed this piece up with Mot d’amour, which was published in 1890, and though it has all the intimacy of the earlier work, it never achieved quite the same success. Once again, it is dedicated to his wife. La capricieuse, composed a year later, is Elgar’s only published showpiece for violin and piano, the brilliant writing being a test for any violinist.

Sursum corda and Offertoire were both composed in 1893 / 4 (originally scored for brass, organ and strings), and written to welcome the Duke of York to a special service in Worcester Cathedral. The subtitles of each piece, ’Andante religioso’ and ’Lift up your hearts’ give some idea of the style of the music, which is heard here in the arrangement by his contemporary, F. Louis Schneider. The famous Chanson de nuit was published in 1897, and quickly rivalled Salut d’amour in popularity. It is one of his most haunting works: a beautiful slow nocturne which eventually fades away to utter stillness. Canto popolare is Elgar’s own arrangement of a section from his concert overture In the South, composed on a trip he and his wife made to Italy in 1903. This beautiful melody, which is both simple and affecting, is very charming, particularly so in this delightful arrangement.

Sospiri op 70 is Elgar’s last short piece for violin and piano. It was written in 1914, and dedicated to Elgar’s close friend and admirer the violinist W H Reed.