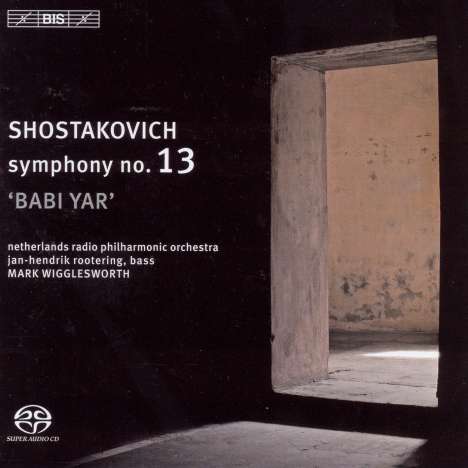 ‘The majority of my symphonies are tombstones’ – these words by Shostakovich are quoted by conductor Mark Wigglesworth in the liner notes to his fifth disc of Shostakovich’s Symphonies on BIS. Symphony No. 13, subtitled ‘Babi Yar’, is a case in point. Shostakovich explicitly stated that he wanted the Symphony – and in particular it’s first movement – to be a monument over the 100.000 Jews slaughtered at a ravine called Babi Yar outside of Kiev in 1941. Not just a monument, however: the Symphony was also intended as an indictment against the anti-Semitism that had been brought to its height during the Nazi era, but which also flourished in post-war Soviet Union, with the result that Babi Yar and other atrocities were kept secret by the authorities. This silence was deeply upsetting to Shostakovich, and when he read Yevgeny Yevtushenko’s poem Babi Yar, he decided to set it to music. ‘I cannot not write it!’, he said to a friend. Shostakovich had originally only intended to set this one poem by Yevtushenko, but deciding to create a larger-scaled work he chose four more texts for what was to become a symphony in five movements. As Mark Wigglesworth writes, these poems ‘reveal a huge kaleidoscope of Russian events, emotions and ideas.’ In the realization of this kaleidoscope, Wigglesworth has the support of bass soloist Jan-Hendrik Rootering, the men of the Netherlands Radio Choir, and – of course – the Netherlands Radio Philharmonic Orchestra, with which the previous instalment in this series, Symphony No. 8, was recorded, to critical acclaim. The reviewer of BBC Music Magazine put it in the following way: ‘Mark Wigglesworth … stretches the playing of the Netherlands Radio Philharmonic to its very impressive limits and remains the finest Shostakovich interpreter of his generation’, describing the result as ‘a performance which always gives us the full measure of this traumatic masterpiece.’