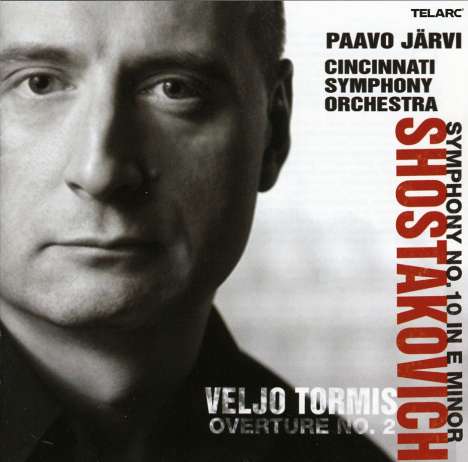 The fifteenth Cincinnati Symphony Orchestra Telarc recording with Music Director Paavo Järvi is due at retail on March 24, 2009. This latest disc includes Dmitri Shostakovich’s powerful Symphony No. 10 in E minor and Overture No. 2 by Veljo Tormis.

This exciting recording opens with the Shostakovich Symphony No. 10, a work Mr. Järvi and the CSO know well. Following a performance at Carnegie Hall in 2003, The New York Times wrote, “...the blistering performance of Shostakovich’s Symphony No. 10...showed the potential that Mr. Järvi and [the CSO] have, and suggest a powerful chemistry between them....The orchestra played with a transfixing ferocity.” The piece was also featured prominently on a hugely successful CSO tour of Europe in April of 2008 that included sold-out performances in Vienna, Amsterdam and Paris.

Soviet composers were always concerned about their music’s meaning, partly because their government – particularly under Stalin – took an active interest in what Soviet art signified to the people. Soviet officials did not speculate about abstract musical meaning. Symphonies were believed to make particular statements, and those statements were either favorable or not.

The Shostakovich work premiered in 1953 following the death of Stalin, and paints a bleak portrait of life under the dictator’s rule. “Between the epic statement of Shostakovich’s tenth symphony and the sheer drama of the Overture No. 2 by Tormis, we can hear two distinct voices related to their response to the Stalinist era,” said Mr. Järvi. “On this disc the two pieces appear together as works emerging from two countries at a common point in their history, both sharing the same conviction, urgency and strength.”

Although Veljo Tormis is mostly recognized for his prolific choral works, his Overture No. 2 is an early, purely orchestral piece that premiered in 1959. “Tormis is one of the more important Estonian composers,” said Mr. Järvi, who is originally from Estonia. “With the Overture No. 2, you hear something truly unique.” In the liner notes, Jonathan D. Kramer says “Tormis claims that he has ‘never composed “pure music,” music for music’s own sake. Even the meaning in the often performed Second Overture is to be found elsewhere, not in the music itself. I have never just “made music.” I have always had some other reason – an idée fixe – a wish to speak up, to express some idea, even a political idea, but not a solely musical one.’”
(concordmusicgroup. com)