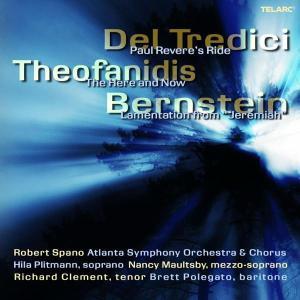 Editor's Choice from Gramophone Magazine (December 2005) Since Atlanta Symphony Orchestra Music Director Robert Spano and Principal Guest Conductor Donald Runnicles began their creative partnership with the orchestra in 2001, they have energized the ASO’s programming and restored its commissioning program. On October 25, Telarc will release the world premiere recording of two of the most recent works commissioned by the ASO: Paul Revere’s Ride by Pulitzer Prize-winning composer David Del Tredici and The Here and Now by Masterprize winner Christopher Theofanidis. Both works are performed by Robert Spano conducting the combined Atlanta Symphony Orchestra and Chorus with soloists Hila Plitmann (soprano), Richard Clement (tenor) and Brett Polegato (baritone). The recording concludes with the “Lamentation” from one of Leonard Bernstein’s earliest works, Symphony No. 1 (Jeremiah), which he wrote soon after he moved to New York during the winter of 1942-43, with Nancy Maultsby (mezzo-soprano).

At the premiere of Paul Revere’s Ride and The Here and Now in Atlanta this past May, the Atlanta Journal-Constitution reported that the performers “received lusty cheers…with the loudest bravos saved for the composers themselves.”

David Del Tredici based Paul Revere’s Ride on the poem of the same name by Henry Wadsworth Longfellow, which recounts the “midnight ride” that set the American Revolution in motion. He wrote the work in the aftermath of 9 / 11, when for the first time in his life, he found himself “bursting with a feeling of patriotism.” The connection between Revere’s heroism of 1775 and that displayed by so many in September 2001 is established in the work’s wailing fire sirens, among many other astonishing and vibrant musical elements. It is truly a tour de force, and a piece which, like all great art, reveals more and more of itself upon repeated listenings. Hila Plitmann is the soprano for whom the piece was written, and her amazing voice rivets the listener.

Christopher Theofanidis—who won the 2003 Masterprize competition for orchestral compositions for Rainbow Body, which was recorded by Spano and the ASO and released by Telarc in 2003—based The Here and Now on poetry by Rumi, the Persian-born Sufi teacher of the 13th century whose writings have been revered by seekers of wisdom for centuries. The texts of the work in 13 short movements exhibit many moods—ecstasy, exhortation, love, mystic wisdom, ardor, and laughter. Three of the movements—The Value of Our Souls, Three Kinds of Women and Insomnia—are designated narratives for baritone soloist.

Now in its 61st season, the Atlanta Symphony Orchestra’s relationship with Telarc dates back to the late 1970s. During the coming season, the orchestra will record two new albums for the label. The first is a recording of three works conducted by Runnicles: Wagner’s Prelude and Liebestod from Tristan and Isolde and Richard Strauss’s Death and Transfiguration and Four Last Songs featuring soprano Christine Brewer. Spano conducts the orchestra in the second recording: Sibelius’s Kullervo with mezzo-soprano Charlotte Hellekant and baritone Nathan Gunn and the ASO Chorus Men.

The 200-member Atlanta Symphony Orchestra Chorus has been acclaimed for the beauty, precision and expressive qualities of its singing since it was founded by the late Robert Shaw. The current Director of Choruses, Norman Mackenzie, worked closely with Shaw for fourteen years and has introduced Shaw’s vision to a new generation of singers and audience members. A new a cappella recording of the Chamber Chorus is set for release in early spring 2006.

Jerusalem-born soprano Hila Plitmann’s career began in 1998 when she premiered Del Tredici’s song cycle The Spider and the Fly with the New York Philharmonic conducted by Kurt Masur. Since then her concert and opera career has flourished here and in Europe. American mezzo-soprano Nancy Maultsby is sought after by opera companies and orchestras globally with a repertoire that extends from the operas of Monteverdi and Handel to recent works by John Adams. Grammy-winning American lyric tenor Richard Clement has performed with most of America’s major orchestras in repertoire ranging from baroque to contemporary music. An Atlanta native and former member of the ASO Choruses, Clement last appeared with the ASO as soloist in Mendelssohn’s Symphony No. 2, “Lobgesang.” Since coming to prominence in the 1995 Cardiff Singer of the World Competition, Brett Polegato has appeared on the world’s most distinguished stages in the U. S. and in Europe and was soloist in the Grammy Award-winning Telarc recording of Vaughan Williams’s Sea Symphony with the ASO.