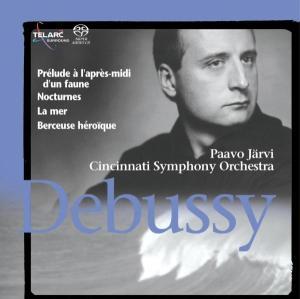 Paavo Järvi leads the Cincinnati Symphony Orchestra through an exquisite Telarc recording of several of Debussy’s more well-known works: Prelude to the Afternoon of a Faun, Nocturnes, La Mer and the seldom recorded Berceuse Héroïque.

“It was all but inevitable that late nineteenth-century French composers would become interested in the Symbolist poets,” according to the liner notes by Jonathan D. Kramer. “The Symbolists sought to duplicate in literature the effects of music by using vague images, elusive syntax, and fleeting ideas.”

Debussy’s idea was to write not a programmatic piece but rather a musical equivalent of the mysterious world of Mallarmé’s poem “Afternoon of a Faun.” He rose to the challenge of creating this unprecedented world of sounds and colors. As composer-conductor Pierre Boulez explains, the opening flute of Faun “brought new breath to the art of music; what was overthrown was not so much the art of development as the very concept of form itself, here freed from impersonal constraints, giving wings to a supple, mobile expressiveness, demanding a technique of perfect instantaneous adequacy. Its use of timbres seemed essentially new, of exceptional delicacy and assurance in touch.”

Debussy’s Nocturnes had a more convoluted genesis. The piece began as Trois scenes au créuscule, specifically composed for Debussy’s upcoming tour of the U. S. in 1892, but fell by the wayside once the tour was cancelled. Two years later, he transformed it into a violin concerto for the Belgian virtuoso Eugéne Ysaÿe (coincidentally, Ysaÿe later became Music Director of the Cincinnati Symphony.) In 1896, Debussy informed Ysaÿe the work was completed, but a year later the composer had second thoughts. Ysaÿe never got to see the concerto, and the score has been lost since. Debussy started once again to recast the three movements. By 1899, they were complete in final form without a solo violin, and the third movement having acquired a wordless women’s chorus. The composer wrote the following program note for the final version: “The title Nocturnes is to be interpreted here in a general and, more particularly, decorative sense. Therefore it is not meant to designate the usual form of the nocturne, but rather all the various impressions and the special effects of light that the word suggests.”

La Mer, one of Debussy’s most performed and recorded works, is written about the sea—although not actually written at the ocean, as the composer thought it would distract him and make the act of composition superfluous. Instead, Debussy composed the work in the mountains of Burgundy, where “my old friend the sea, always inexhaustible and beautiful,” was but a sensuous memory. “To evoke the sea was automatically to evoke the most profound of human emotions,” Kramer notes. “Debussy was a romanticist; in his desire to remove himself and let nature speak directly, he was a classicist. The essence of his impressionist style lies in the balance between these romantic and classic sides of his musical personality.”

Debussy composed Berceuse Héroïque in 1914, shortly after the fall of Belgium at the beginning of World War I, to honor the Belgian king and people. Michael Murray’s liner notes for this portion of the recording suggest that Debussy found the work hard to write. The Belgian national anthem in particular, which the composer had intended to figure prominently in the piece, “evokes no feeling of heroism in the hearts of those who were not brought up with it,” Debussy said at the time. “It was all I was able to achieve, having been physically affected by the proximity of hostilities, not to mention my own feelings of inferiority in military matters.” The work was originally written for piano and was later orchestrated by the composer and published in 1915.

The Debussy recording is Paavo Järvi’seventh disc with Telarc and the Cincinnati Symphony Orchestra, and the latest chapter in an outstanding legacy of recordings. His previous six Telarc releases have garnered lavish critical praise. Music of Ravel was awarded a Diapason d’or and also was named an “Editor’s Choice” in Gramophone. For his performance of Romeo and Juliet: Complete Suites from the Ballet by Prokofiev, American Record Guide wrote, “If there’s any doubt that the Cincinnati Symphony is one of the world’s greatest ensembles, this release will quickly silence it.”

Producer & Consumer Comments: What is that slapping sound on track 5? This sound is actually the bass players who were instructed to play "pizzacato" and "arrachez"—the result of which is a big slap sound when the string hits the wood of the bass. The conductor, Paavo Jarvi was very specific about this section. Since the marking in the score is sforzando pizzacato as well as being marked "arrachez" (which means to pull or tear away, to extract or uproot with force or great difficulty), his feeling is that it is such an unusual marking for Debussy that he clearly was making a point and intended that this should be a violent pizzacato. No other pizzacato in the entire work is marked this way.
(concordmusicgroup. com)