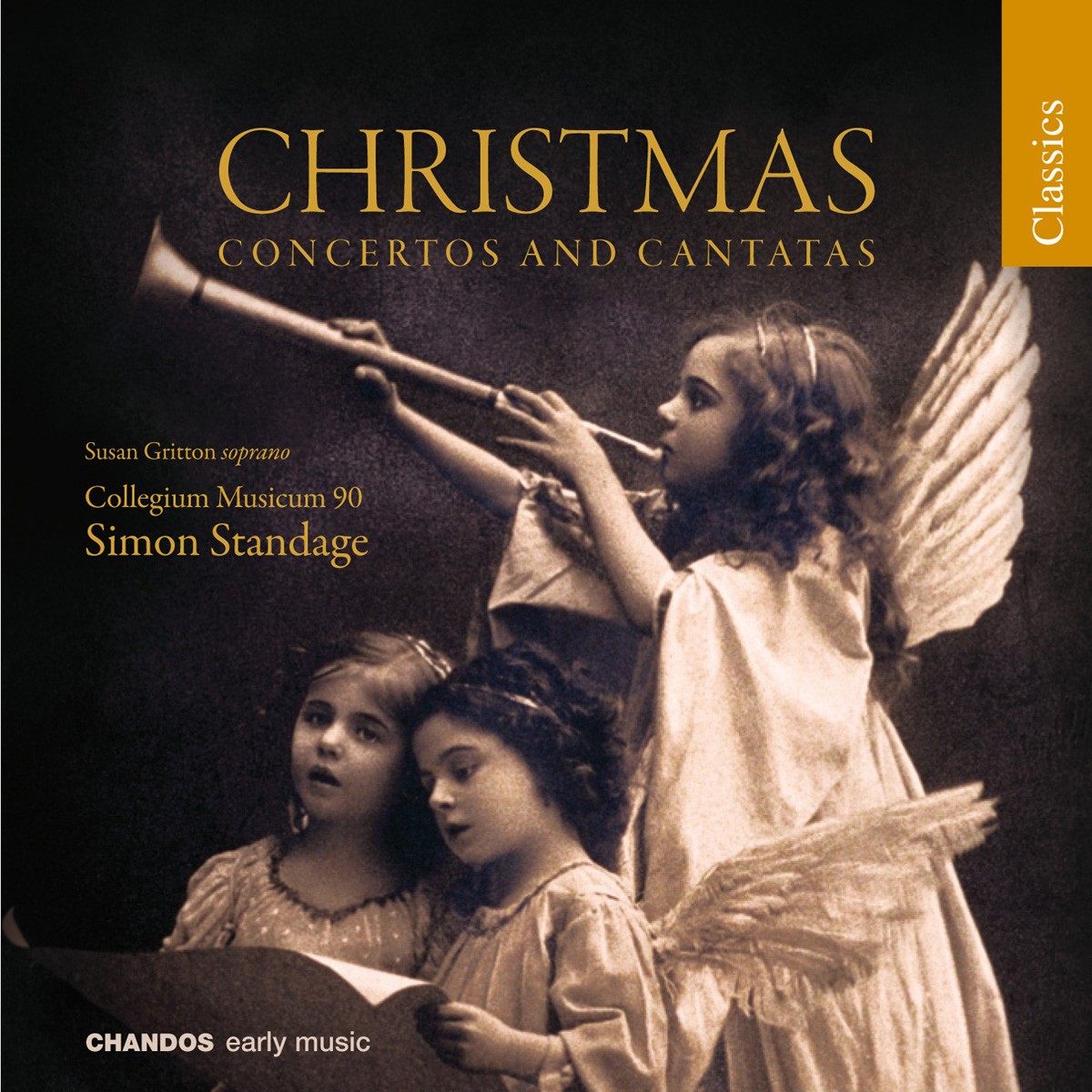 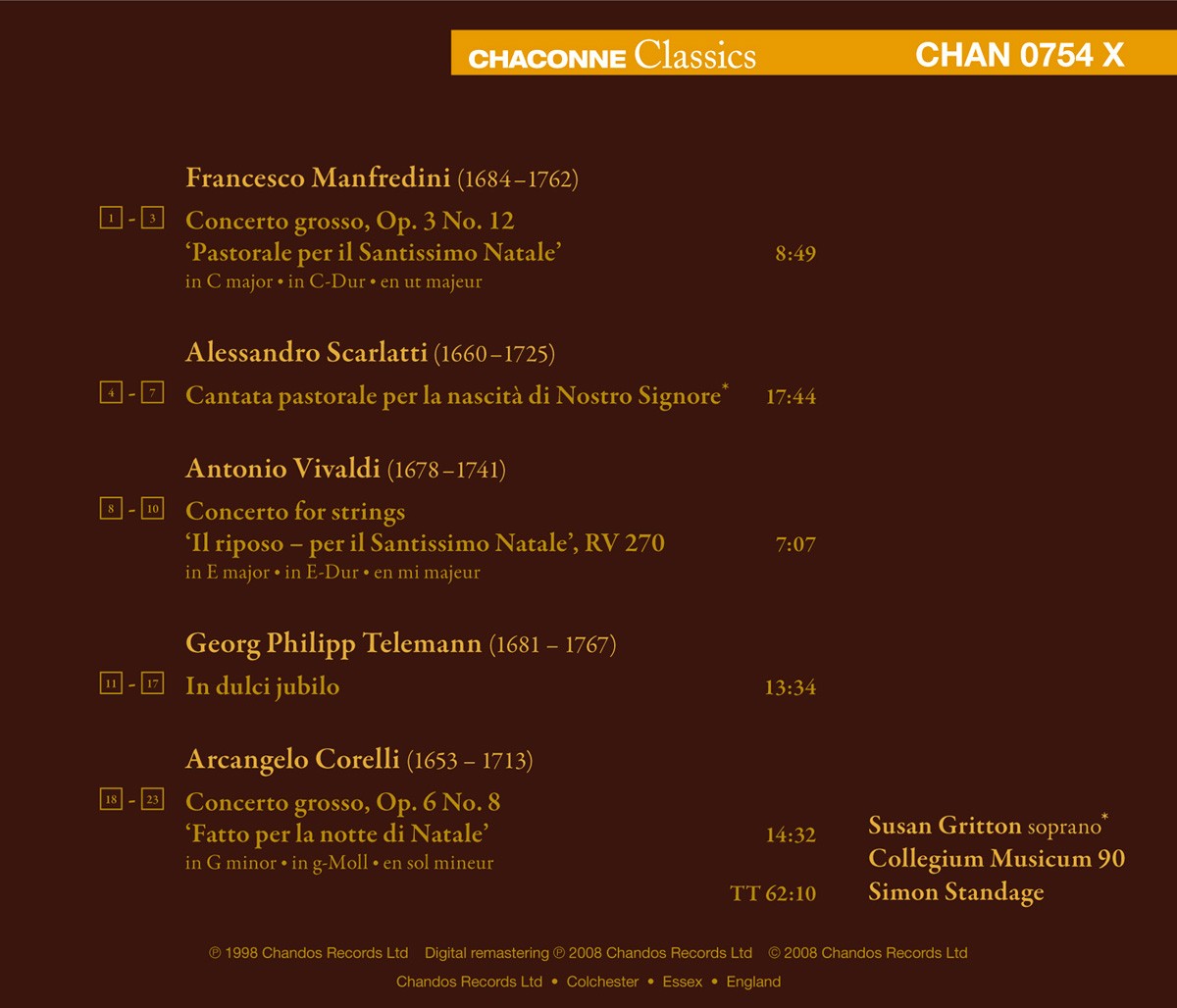 The musical output of Francesco Onofrio Manfredini was comparatively small. His twelve Concertos, Op. 3 were issued by the Bolognese publisher Silvani in 1718. The Concerto in C major , the last in the set, is scored for a concertino of two violins and cello and is subtitled ‘Pastorale per il Santissimo Natale’.

The Italian chamber cantata reached a stylistic peak with the works of Alessandro Scarlatti. The Cantata pastorale per la nascita di Nostro Signore was written for performance on Christmas Eve. As in the ‘Christmas’ Concertos by Corelli and Manfredini, Scarlatti introduces a sophisticated evocation of bagpipes and shawms played by shepherds as they travelled to Rome to celebrate the birth of Jesus. This colourful music can be heard both I the introductory Sinfonia, and more extensively in its concluding aria.

It was in the hands of Antonio Vivaldi that the Venetian Baroque concerto reached its summit. Two distinctive features of the Concerto in E major RV270 ‘Il riposo – per Il Santissimo Natale’ are his instructions for performance. First he calls for muted strings throughout, and secondly he excludes the harpsichord continuo from the texture. The combined effect is one of intimacy and tenderness.

Georg Philipp Telemann wrote his cantata ‘In dulci jubilo’ between 1716 and 1719. As well as Neumeister’s text, he also incorporated the fourth stanza of Luther’s hymn ‘Gelobet seist du, Jesu Christ’, and some of the mediaeval Latin-German poem, ‘In dulci jubilo’. It is this traditional Christmas poem, and its brightly scored opening reflecting the festive character of the season.

Archangelo Corelli wrote only one set of concertos, his Op. 6 containing twelve works for strings, published in 1714, but written several years earlier. The Concerto grosso, Op. 6 No. 8 ‘Fatto per la notte di Natale;’ is the best known of the set. It is a refined evocation of rustic music performed by Italian peasants who made their way from the countryside into towns before Christmas to re-enact the shepherd’s adoration of Christ, the underlying strings providing an imitation of customary bagpipe.

Sultry seduction surfaces in Susan Gritton’s reading of Alessandro Scarlatti’s ‘Cantata for the Birth of Our Lord’. Collegium Musicum 90 and Simon Standage are also on seductive form in famous ‘Christmas’ concertos by Vivaldi, Manfredini and Corelli Classic FM Magazine

This is a delightful addition to the Christmas market, and the careful selection of its items and superb recording ensure that, like the traditional puppy, it’s not just for Christmas Classic CD on its original release

I enjoyed this re-release (which I somehow missed first time around) very much. The most unexpected piece is a lovely Christmas cantata by Telemann – CM90 have been such champions of Mr T’s orchestral output, it’s a pity we have not heard more church music from them. Susan Gritton is the first-rate soloists in Alessandro Scarlatti’s perfect gem of a cantata for Christmas night – beautifully accompanied too Early Music Review

This is period-instrument performance at its best American Record Guide