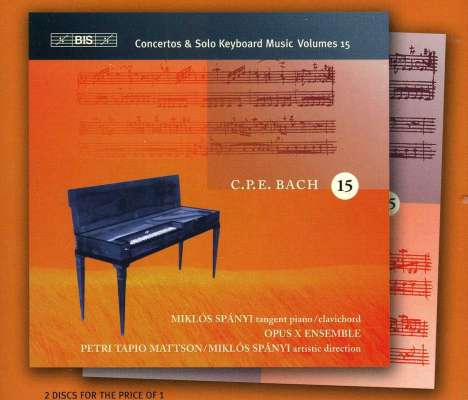 lieferbar innerhalb 1-2 Wochen
(soweit verfügbar beim Lieferanten)
EUR 19,99*
Versandkosten
Two cycles that have consistently been receiving high praise from reviewers are Miklós Spányi’s survey of C. P.E. Bach’s Music for Solo Keyboard and of the same composer’s Keyboard Concertos. Though we have been releasing these two series separately, they now coincide at Volume 15, and we have therefore taken the opportunity to offer all lovers of C. P.E. Bach, and period instrument keyboard music a special present, by packaging these two discs together for the price of one! With the usual, thorough documentation and liner notes by specialists Darrell M. Berg and Jane R. Stevens, as well as by Spányi himself, this release is an excellent opportunity for those curious about these 18th century masterpieces off the beaten track.

The broad-ranging double-bill offers some of Bach’s most famous keyboard works – for instance the great concerto in D minor, which has often been compared to Mozart’s concerto in the same key – as well as rarities such as the small character pieces for solo keyboard in which Bach portrayed some of his friends and acquaintances.

After a total of 30 discs, Spányi himself hardly needs an introduction: suffice it to say that he has lost none of his passion for the music or for the clavichord and tangent piano that he performs it on. A recent solo disc (Volume 13, BIS-CD-1328) was greeted with the following recommendation from the reviewer on MusicWeb International: ‘The result is no less than astonishing. This is wonderful music, beautifully played, and I recommend this disk to anyone who loves keyboard music.’ And the critic in the German magazine Toccata was just as enthusiastic about the latest disc of concertos (Volume 14, BIS-CD-1487), with the Finnish period band Opus X: ‘What passion and yielding softness is hidden in this music, combined together with such elegance, and, of course, expertly brought out. My compliments to all involved! More, please!!!’