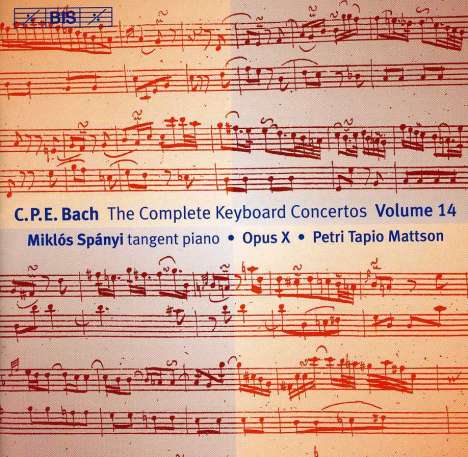 versandfertig innerhalb von 1-3 Tagen
(soweit verfügbar beim Lieferanten)
EUR 19,99*
Versandkosten
Includes World Première Recordings Having received numerous awards and distinctions, this series is by now self-recommending. As anyone who has encountered previous volumes knows, Miklós Spányi’s combination of musicianship and expertise and the wonderful qualities of this unjustly ignored music is a guarantee for an unusually satisfying listening experience. For this volume a change in recording venue has taken place. Previous instalments were recorded in Hungary with the Hungarian period orchestra Concerto Armonico, whereas the present recording was made in Finland, Spányi’s country of residence, with Opus X, a young Finnish band. This means a slightly new, and fresh, approach to the performance of the three works included on this disc. Composed between 1750-1765, they are examples of how Emanuel Bach adapted to the market, in terms of making different versions for different circumstances. In the words of C. P. E. Bach expert Jane R. Stevens, author of the liner notes, “they are all evidence of the practical side of Emanuel’s prolific musical production.” For this release, the cover has been slightly adapted, reflecting the new departure in this series.