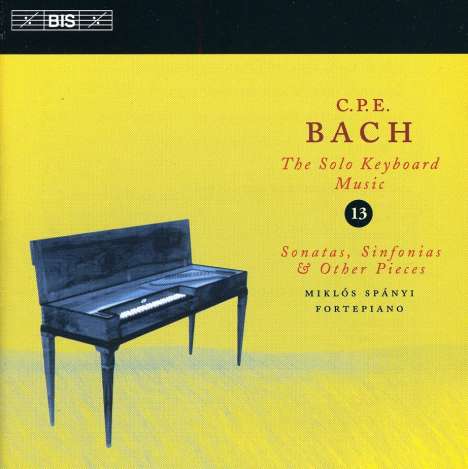 versandfertig innerhalb von 1-3 Tagen
(soweit verfügbar beim Lieferanten)
EUR 19,99*
Versandkosten
This 13th volume in Miklós Spányi’s ongoing series of the solo keyboard music of C. P. E. Bach is more that usually varied. The programme consists of works from several genres – variations, sinfonias and sonatas, as well as one of the composer’s few fugues – all of which were composed between 1741-1755. The repertoire has been governed by the instrument which Miklós Spányi has chosen for this recording, a copy of a Silbermann fortepiano. In Spányi’s own words, the works which have been brought together here are among the most ‘fortepiano-friendly’ compositions in C. P. E. Bach’s œuvre. The Silbermann instrument – a great favourite with Bach’s employer Frederick the Great, who owned a number of them – gives an extra vitality and grandeur to the ‘orchestral’ writing of the sinfonias as well as underlines the pianistic character of the set of variations. A very special instalment in a very special series, therefore!