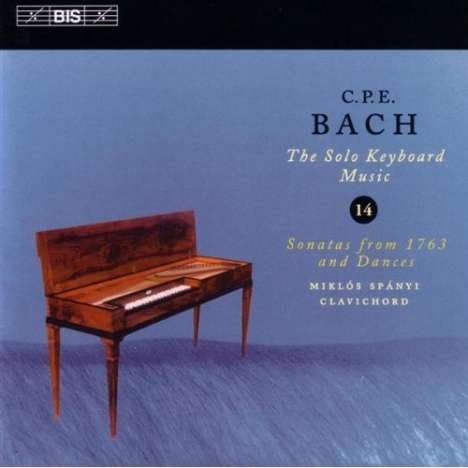 Nearing the mid-point of this series of C. P. E. Bach's music for solo keyboard, Miklós Spányi has put together a varied programme comprising three sonatas, interspersed with three pairs of dances, all of them written between 1756-1766. The dances – which were published individually and have been paired together by Spányi himself – are minuets and polonaises, the two genres that C. P. E. Bach wrote most of. Some are simple pieces intended for keyboard players of any degree of accomplishment; others call for performers who are advanced, both technically and in their understanding of the subtleties and refinements of Bach's melodies. In this context it is interesting to note that all of the dances on this disc were published during Bach's lifetime, whereas the three sonatas remained unpublished, indicating the growing interest from amateurs for music to play. Bach's catalogue of works includes more than 150 keyboard sonatas. Always intent on developing the form, around the time that the present three sonatas were composed, Bach began to explore a method of unifying the three-movement sonata. This consisted of writing movements, usually middle movements, that were intended to proceed without closure to the movements that followed, a technique which is exemplified on the present disc. For this programme, Spányi has chosen a copy of one of the finest examples of the Saxonian school of clavichord building, an instrument built in 1785 by Gottfried Joseph Horn near Dresden. The same instrument was used on Volume 10 of this series, a disc which was greeted with much enthusiasm by the reviewers, for instance in Int. Record Review ( »Spányi is probably the best clavichordist currently recording. I certainly haven't heard better playing on disc.«) and the British Clavichord Society ( »This CD is a striking achievement.« )

»The pieces work well on the clavichord, and Miklos Spanyi's ability to make the music sparkle and sing lends additional allure« Sunday Times 02 / 2006