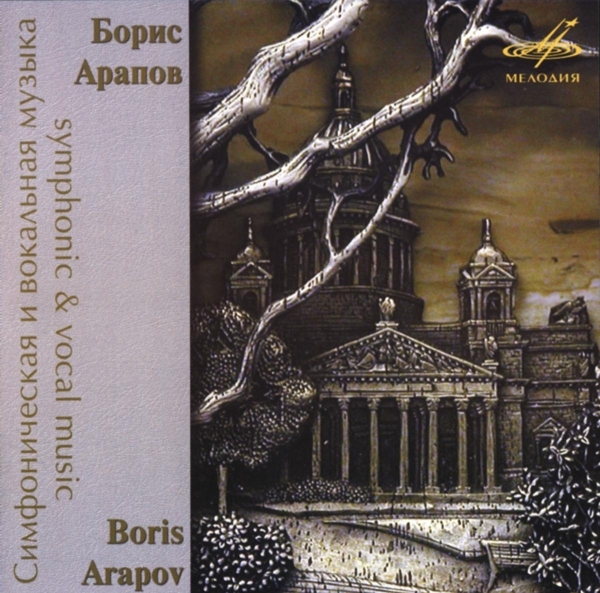 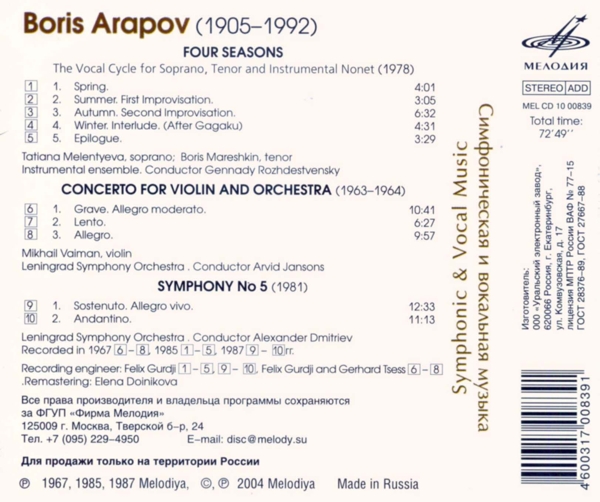 Boris Arapov
Boris Aleksandrovich Arapov was born on August, 30 (September, 12) 1905 in St. Petersburg. Since 1923 he studied at the Leningrad Conservatoire with M. M. Chernov and further with the outstanding Russian composer and teacher V. V. Shcherbachev, till he graduated his class of composition in 1930.

While still a student Arapov embarked on his own teaching career. He taught theoretical courses at the Central Music College (1927-1932) and at the State Institute of History of Arts (1929-1930) in Leningrad. Since 1930 Arapov was a teacher at the Leningrad Conservatoire, he taught composition in 1944-1948 and in 1952, and held the position of the head of Faculty of Orchestration since 1951, since 1976 - the head of Faculty of Composition.

Teaching was a genuine vocation of B. A. Arapov. One of his students, Sergey Mikhailovich Slonimsky wrote in this respect: "Boris Aleksandrovich is blessed with an amazing gift of eternal youth both in creativity and teaching. As if he has once tasted the magic youth elixir and - similar to the hero of ballet Dorian Grey - has remained young, except without guilty conscience. Dismissed from class of composition, Arapov taught analysis and orchestration. Possessing an equal talent for linear and coloristic structure, he taught me the principles of the orchestral plan, the art of interpreting the global idea as a whole prior to scrutinizing the details".

B. A. Arapov's success as a teacher is natural, his achievements being well-grounded on his enormous persona experience as a composer. B. A. Arapov - is the author of such great works, as operas "Hojha Nasr-ed-Din" (1943), "Frigate The Victory" (on the plot of the story written by A. S.Pushkin "Peter's the Great Servant", 1957), "Rain" (S. Maugham, 1967), ballet "Portrait of Dorian Grey" (O. Wilde, 1973), seven symphonies.

Boris Arapov's creative longevity is amazing: he wrote till his very last days. S. M. Slonimsky wrote: "Arapov's "St John's Revelation" performed in 1991 came as a pure inception. It is by no means less original than opuses of his most nonconformist students, whose success meant as much to him as his own. Symphony No 7 could have been composed by an adolescent, who overgrew musical technology - its passionate message is ingenuous and inimitably ardent".
Boris Aleksandrovich Arapov died on January, 27, 1992 in Saint Petersburg.

Oriental images and themes have always fascinated B. A.Arapov. "The Tadjik suite" (1938), trio for clarinet, violin and piano on the Mongolian themes (1943), "Negro songs of the protest for voice and jazz band (1940) as well as symphony - poem "Free China" are just few illustrations. This passion for the Orient is also denoted in the musical coloration skills of the composer.

The vocal cycle for soprano, tenor and instrumental nonet "Four seasons" is created in 1978 on verses of the Japanese poetry hokku (haiku). This genre of the Japanese poetry represents three unrhymed lines and consists of seventeen syllables (5~7-5). The challenge that Arapov faced was considerable, - the composer was to find a balance between freedom, ease of statement and precision of the constant metric structure peculiar to this poetic form.

Succession of seasons reflects sequence of stages of human life. The text / lyrics merely represent sketchy canvas whereas it's the music that illuminates the profound abysses of emotion and the common poetic aura. Simplicity and minimalism of means necessary are amazing: beginning with the sounds of a flute, reminiscent of a nightingale singing, in the first movement, and up to the sounc similar to ringing bells introduces the con¬templative substance of music thai emphasizes the dramatic notes.

Concerto for Violin and Orchestra is created in 1963-64 years. Its vivid melodic images merge to form integrity of recurrent, similar to Leitmotiven, har-monical and timbral "centers of gravity" Paying a tribute to the original melodiousness of the Concerto, expressiveness o1 the part performed by the soloist instrument, the composer facilitates the orchestration, releasing low brass instru¬ments such as trombones and tuba simultaneously enhancing the role o1 instruments with whimsy, ringing timbres - xylophone, vibraphone, celesta, piano, bells.

The first movement opens with a slow pathetic introduction - violin solo. The sound of the same theme is even more monumental the next time it emerges: chords of the trumpets accompanying it in the low register, of bass clarinet and bassoon evolve as an original "core" of this pathetic image which is interlaced in all the parts of the cycle.

The virtuoso cadence of the violin concludes the opening part and leads to the main movement written in the form of sonata allegro. It is conveyed from low instruments to the high ones, resembling an acute zigzag changing the register of the sound from a bassoon to a flute, from a violin to a violoncello. In the orchestral tutti it acquires a macabre touch. Graceful tunefulness of the intermediate part evokes another emotional sphere: it leads to the theme of the second part - captivating and lyrical.

As it unfolds the theme undergoes a dramatic reassessment. The opening phase - a gusty fugato, is founded on the revised main theme (bassoon, then clarinet, oboe, and violin are introduced successively). The theme of introduction sounds as an ominous grotesque march, supported by chords of a grand piano and wind instruments. The secondary theme also attains a drama coloring. Its climax coincides with the most intense episode of development. The dynamic wave of development furthermore grasps the reprise -final section of the first part, featuring themes that arise in a mirror sequence. Only the code suggests calm and a gradual enlightenment of sounding.

The second part - a theme with variations that comes close to the form of pas-sacaglia (the musical form belonging to the epoch of Baroque featuring variations on the unchangeable bass that regained popularity at the end of the XIX - first half of the XX century). Picturesque chords -flashes of light - outline a pattern that gradually secures melodic phrases of the oboe, violin and xylophone. The invariance of the chords' themes is emphasized with the invariable orchestration.

The final chord indeterminate in its scale — sounding in major and in minor simultaneously - becomes at the same time the first chord of the finale. It is written in the form of rondeau and includes several multicharacter themes: heroical, fanfare-like, grotesque, with characteristic glissando vignette at the end of the phrases, dancing-like, with sharp dissonances and lyrical chanting melody echoing in high orchestral pitches. The cadence of the solo violin gathers all themes from the previous parts. At the coda the powerful image of introduction reemerges attaining distinct hymnical features. Solemnity of its sounding is stressed by the timbre of the bells. Pathetical impulse gradually dissipates while the theme dissolutes fleeting to the highest pitch, to the transparent ringing of vibraphone with celesta.

The Fifth Symphony is written by B. Arapov in 1981. Along with the Fourth (1971) and the Sixth (1983) symphonies it forms some kind of a triad. At the same time while the first and the latter are distinct in their monumentalism, the Fifth Symphony frames the lyrical core. The first movement of the symphony written in the form of sonata draws a picture of a dramatic struggle. The music emanates dynamism and vigor. The main theme of the movement, assigned to the trumpet, is the carrier of the principal idea of the symphony. The quieter second theme which is by no means less intense suggests a counterbalance to the main theme. Overcoming "resistance" of the secondary theme, the main theme reappears in the reprise (past the climax) in the initial sounding, symbolizing the victory of the active origin.

The second movement is distinguished by tranquility and true lyricism. Musical images acquire unique loftiness. In the code of the second part emerges a variation on the main theme of the symphony. It sounds delicate and pure. (melody. su)