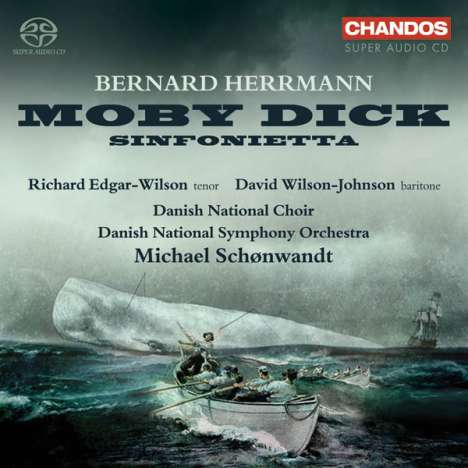 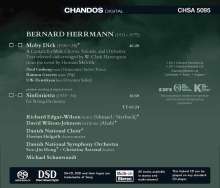 Bernard Herrmann, born in New York in 1911 to Russian immigrants, is best known today as a composer of film music. Most notably he worked with Alfred Hitchcock on classic productions such as North by Northwest, Vertigo, and Psycho, as well as on Orson Welles’s Citizen Kane and Martin Scorsese’s Taxi Driver. But despite his strong ties to Hollywood, Herrmann always thought of himself as a composer who worked in film, and never as a ‘mere’ film composer.

It was during his years as conductor and composer with the CBS Symphony Orchestra that Herrmann got the inspiration for Moby Dick – A Cantata. Initially, Herrmann intended the work as an opera, but he soon concluded that the stage was not an ideal medium for a musical version of Moby Dick – and a purely orchestral work could not make use of Herman Melville’s prose. A successful compromise was the cantata form, and Herrmann completed the work in 1938. It was premiered by John Barbirolli and the New York Philharmonic on 11 April 1940, the conductor describing the work as the most important work that he had heard from a young American composer.

For a short period in the early 1930s, Herrmann was inspired by the works of Arnold Schoenberg and his followers. The infatuation did not last long. It culminated – and ended – with the Sinfonietta for Strings of 1935 – 36, a work which never received a public performance. The Sinfonietta remained forgotten until the early 1960s when Herrmann adopted it as a model for the latter half of his famous film score to Hitchcock’s Psycho, which illustrates Norman Bates’s disturbed state of mind. This disc presents the premiere recording of the Sinfonietta in its original version.