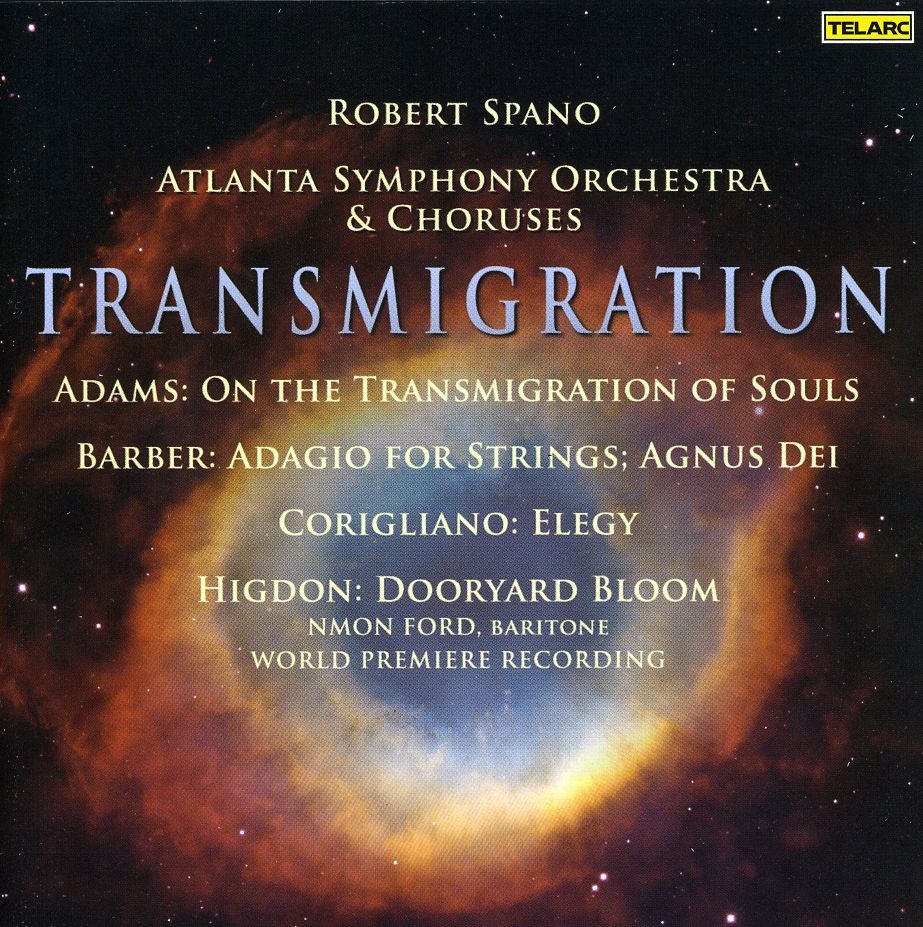 Robert Spano Conducts The Atlanta Symphony Orchestra in Transmigration, A Recording Devoted to Honor and Remembrance

All of us have personal heroes who inspire us. Transmigration, the newest Telarc recording by the Atlanta Symphony Orchestra conducted by Robert Spano is a collection of hymns and requiems for those we wish to honor and remember. The recording comprises Samuel Barber’s universal expressions of loss, Adagio for Strings and Agnus Dei; John Corigliano’s Elegy to lost youth; Jennifer Higdon’s setting of poetry eulogizing the slain Abraham Lincoln in Dooryard Bloom, and finally John Adams’s reflection of personal grief for the victims of the World Trade Center tragedy on September 11, 2001, On the Transmigration of Souls.

American conductor Samuel Barber’s Adagio for Strings is widely considered a masterwork of modern classical music. On the advice of Arturo Toscanini, Barber reworked the Adagio movement from his first string quartet for a full string orchestra. Toscanini introduced Adagio for Strings in New York in 1938 and included it on his South American tour program. Through Toscanini’s recording, the Adagio for Strings was Barber’s first work to reach a wide audience. Its sad but noble quality expressed the grief of millions when it was selected for radio play immediately after the announcement of President Franklin Roosevelt’s death in 1945. The piece has since remained among the first choices for music expressing sorrow and honor on the death of great public figures. Barber’s Agnus Dei, performed a cappella by the Atlanta Symphony Orchestra Chamber Chorus, was a choral setting of the traditional Latin prayer “Agnus Dei” derived from the same Adagio movement in his first string quartet, the Adagio for Strings.

John Corigliano’s Elegy for orchestra was based on an incidental score he wrote for an off-Broadway production of Wallace Frey’s Helen - an account of the aging Helen of Troy. He dedicated it to Samuel Barber, although it was not written in memory of Barber, as he was still very much alive when Mr. Corigliano wrote the piece in 1965. However, Mr. Barber was a valued mentor and friend, who brought the then-unknown composer to the attention of G. Schirmer, which continues to be Mr. Corigliano’s publisher. Today, Mr. Corigliano is considered one of America’s most prominent composers. He has been honored with a Grawemeyer Award, a Pulitzer Prize, several GRAMMY® Awards, as well as an Oscar for the soundtrack to the 1998 film, The Red Violin.

Jennifer Higdon set Dooryard Bloom for baritone and orchestra to Walt Whitman’s landmark American poem, When Lilacs Last in the Dooryard Bloom’d. Whitman originally wrote Lilacs as an elegy to Abraham Lincoln, although the poem never refers to the slain president specifically, allowing for a universal message. In the same way, Jennifer Higdon says, “The beauty of music is the power to suggest things that even words might not convey. Therefore, take your own meaning from this piece, literally or emotionally or metaphorically…let it be your own dooryard.” Higdon’s blue cathedral, a previous elegy, which she wrote in response to the death of her brother, was recorded by the Atlanta Symphony Orchestra and released by Telarc in 2003. The following year, Telarc released the Atlanta Symphony Orchestra’s GRAMMY® nominated recording of Higdon’s Concerto for Orchestra and CityScape.

John Adams’ On the Transmigration of Souls for orchestra, chorus, children’s choir, and pre-recorded soundtrack, received the 2003 Pulitzer Prize for Music as well as three GRAMMY® Awards. Adams wrote the work in the aftermath of the World Trade Center tragedy, not as a condemnation or patriotic call to arms or even a grand memorial. Instead, the 25-minute work remains mostly gentle and restrained, encompassing bitter memories and crushing heartbreak. Adams describes it as “a memory space – a place where you can go and be alone with your thoughts and emotions.” Born in New England, Adams is one of America’s most admired and respected composers. A musician of enormous range and technical command, he has produced works – both operatic and symphonic – that stand out among all contemporary classical music for the depth of their expression, the brilliance of their sound and the profoundly humanist nature of their themes. Adams says in his recently published memoir, Hallelujah Junction – Composing an American Life, that when he first heard the Atlanta Symphony Orchestra perform the piece, he heard “an understanding and empathy that I’d never before suspected was lying inherent in the texts. The pure American quality of their enunciation and their perfectly balanced sonorities lifted the matter-of-fact plainness of the words to a transcendental level, and for once the piece did not seem as compromised and uneven as I had previously thought.”