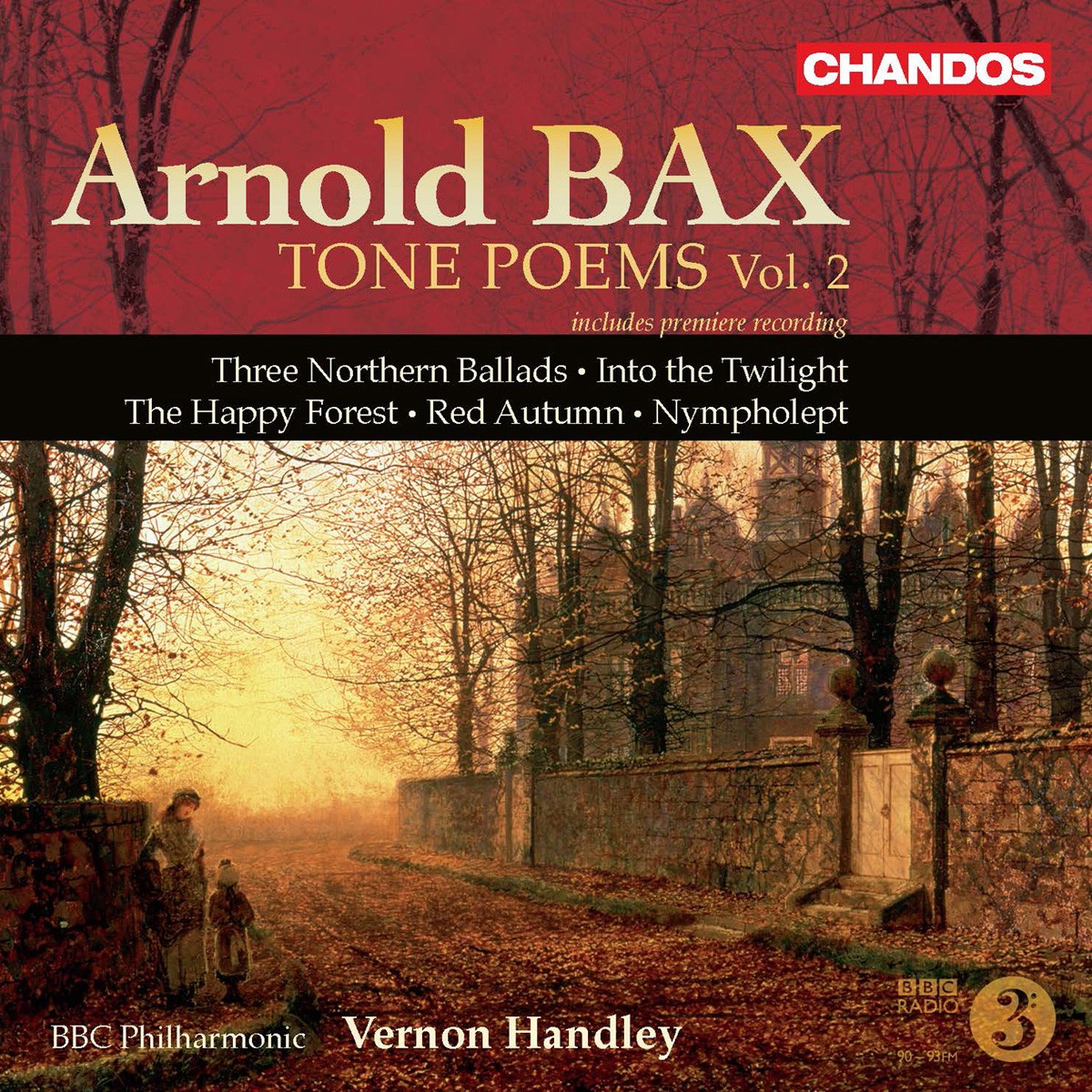 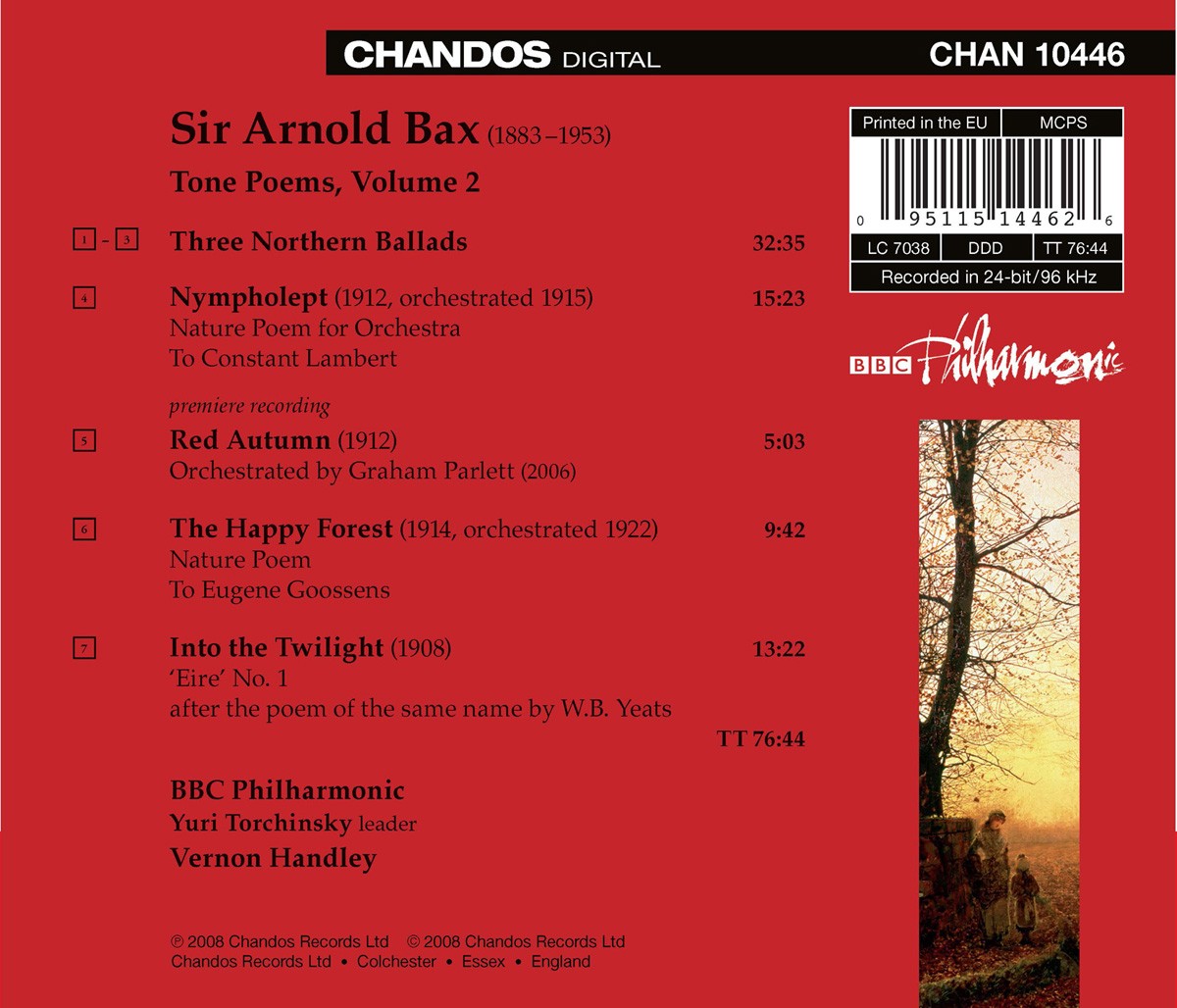 On Volume 1, International Record Review wrote: ‘This is the greatest single Bax orchestral record I have heard: the orchestral playing is magnificent throughout, of a quality that this music has been crying out for for decades but which it has never received – until now… over and above the excellence of this fine orchestra is the profound understanding and musicianship of Vernon Handley’s conducting.’

For Bax there were several periods of intense creativity when he committed to paper a variety of works in the form of piano scores, and orchestrated them when required. Many of the tone poems performed here were conceived in this fashion, including Red Autumn, which here receives its premiere recording. Originally a solo piano piece, it was then arranged for two pianos by Bax himself. In 2006 the Sir Arnold Bax Trust commissioned Graham Parlett to orchestrate the work in Bax’s early period style specifically for this recording. Heard in its orchestral dress it immediately reveals its family resemblance to the tone poems Nympholept and November Woods, composed round the same time.

Vernon Handley brings together for the first time three orchestral movements to which the collective title ‘Three Northern Ballads’ has been given. They date from the late 1920s and early 1930s, breathe much the same atmosphere, and Handley is keen to promote them as forming a unified, almost symphonic, whole. The first, which Bax composed and gave the name ‘Northern Ballad’ in 1927, was followed by a second Ballad, orchestrated in 1931. The third, formally entitled Prelude for a Solemn Occasion, appears to evoke a Sibelian musical landscape, and occupies the same world as the composer’s Sixth Symphony, which followed almost immediately. When Bax orchestrated the third piece he was taking his usual winter sojourn at Morar, Inverness-shire, and in a letter to a friend wrote, ‘It suggests an atmosphere of the dark north and perhaps dark happenings among the mists’. The nature painting in the work certainly calls to mind the wilds of Scotland.

Joining this quasi-symphonic work, in addition to Red Autumn, are three further early tone poems. Into the Twilight dates from Bax’s first intensive period of composition, the years immediately preceding World War I, and originated as the prelude to a planned Irish opera, Deirdre. It received only one performance during Bax’s lifetime, in 1909, conducted by Thomas Beecham. Nympholept which followed was the work in which Bax fully achieved the impressionistic technique of his first maturity. It suggests the pagan natural world in which Bax was so deeply interested. The Happy Forest, follows a pastoral short story by Herbert Farjeon, and is an Arcadian evocation much like Nympholept. It was first performed in 1923 under Eugene Goossens, its dedicatee.

Vernon Handley, who has known Bax’s music for almost 50 years and in recent years has given us a five-disc set of Bax’s symphonies that was universally welcomed and acclaimed by press and critics. (CHAN 10122)

" ... Handley’s rapport with this music is so satisfying and convincing it makes this release self-recommending, one to delight Baxians and audiophiles alike. I would not wish to limit appreciation to those who already have the Baxian bug, for I cannot imagine a music lover drawn to Debussy, Ravel, Scriabin, Sibelius (and maybe Wagner) not responding enthusiastically to the musical wonders here." International Record Review

"…this is the version to acquire" BBC Music Magazine

"Vernon Handley’s revelatory Bax odyssey for Chandos comes up trumps again with this generous feast spanning a quarter of a century from the enchanted Donegal glens of the youthful Into the twilight (1908) to the rugged, wintry seascape of the Second Northern ballad, completed in 1934... if I encounter a more rewarding issue all year, I shall be surprised." Gramophone Editor’s Choice

"Handley’s command of this unfamiliar music is wonderfully assured; the BBC Philharmonic play superbly for him, and it is hard to imagine anyone else doing it better or with more commitment." The Guardian

Into the twilight (after the poem of the same name by W.B. Yeats)