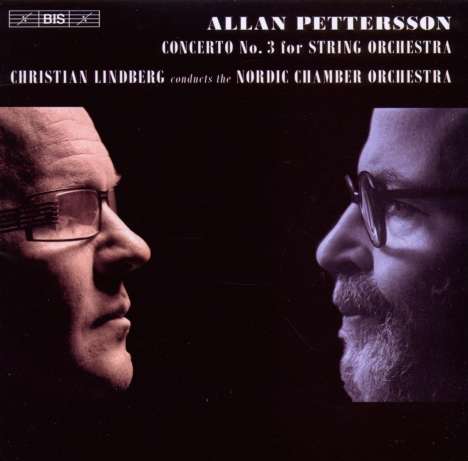 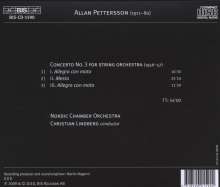 versandfertig innerhalb von 1-3 Tagen
(soweit verfügbar beim Lieferanten)
EUR 19,99*
Versandkosten
Following their 2009 release of the first two concertos for string orchestra by Allan Pettersson comes Christian Lindberg's recording with his Nordic Chamber Orchestra of the third and last of the concertos. By the time of its composition, Pettersson had already written three symphonies, and during the following two decades he produced symphony after symphony. It is therefore perhaps not surprising that the large-scale Concerto No. 3 for string orchestra exceeds any conventions that may be associated with its genre and, in fact, lays claim to symphonic weight. Characterized by dynamic culminations and passages of extremely detailed writing, as well as a melodic flow, the work is based on just a few motifs; an example of the delicate balance between intricate development and wide-ranging lines that is a fundamental element of Pettersson's music. At the time of the first performance Pettersson himself stated that 'It's my mother who is my music. It's her voice that speaks there'. Regarding Mesto, the second movement, he added that it 'is a 24-minute-long statement in which I gradually arrive at a song that could have been sung by a Salvation Army soldier. The song is a testimony, a confession'. This highly personal music, by one of the most personal of all composers, began to lead an existence of its own very shortly after the first performance of the concerto, and is regularly performed as a work in its own right. Pettersson, who passed away in 1980, has found a present-day champion in Christian Lindberg, described in Gramophone's review of his earlier Pettersson disc as 'a most persuasive advocate', while his orchestra received high praise from all quarters for its performances of the highly virtuosic scores. Receiving the blessing of the composer's estate, Lindberg in January 2010 conducted the Norrköping Symphony Orchestra in the world première of the composer's never completed first symphony. While waiting for the results of further Pettersson recordings by these forces, the present release is sure to find a warm welcome.