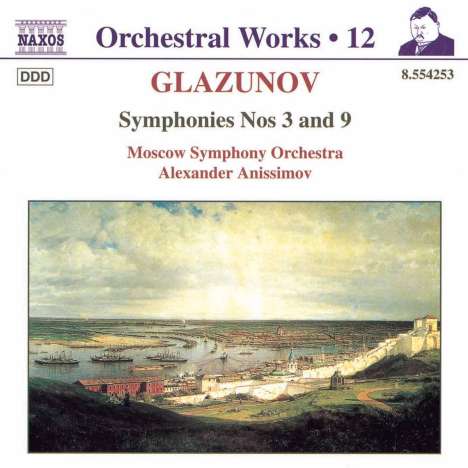 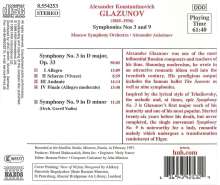 umgehend lieferbar, Bestand beim Lieferanten vorhanden
EUR 12,99*
Versandkosten
** Naxos Glasunow-Edition Vol.12
The Symphony No. 3 in D major, Opus 33 occupied Glazunov intermittently for a number of years. The first performance took place in St Petersburg in December 1890, conducted, because of the composer's illness, by Lyadov.
Glazunov started work on his Symphony No. 9 in D minor in 1910 but sketched only the first movement in short score, fearing the sinister implications of its numbering. For too many composers their ninth symphony had been their last. The score was given to Rimsky-Korsakov's son-in-law, Maximilian Shteynberg, in 1928 and was orchestrated in 1947 by Gavril Yudin. The seed from which the movement grows is heard in the first four notes of the viola in the slow introduction, marked Adagio, mounting to a dynamic climax as instrument after instrument enters. The Allegro moderato that follows is drawn from the same source, while the clarinet introduces an Elgarian secondary theme, to be accompanied by a solo French horn, similarly orchestrated when it is heard again in recapitulation. The movement ends with the return of the slow introduction, gradually fading away to a whisper.