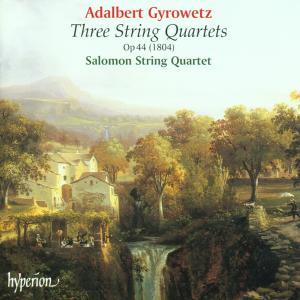 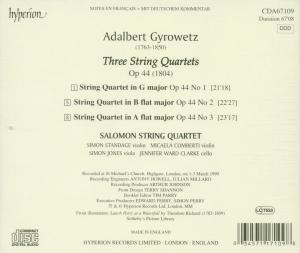 Since the early 18th century, music has been encouraged in all children in the Czech lands and so it is not surprising to find, by the end of the eighteenth century, Bohemian and Moravian musicians holding leading positions in courts and orchestras all over Europe. When looking at the beginnings of these men, especially the composers who were significant figures in Dresden, Mannheim, Vienna, London and Paris, many of them came from humble families in remote towns and villages. Most of them had to find employment abroad, as there was not sufficient at home. This was also the pattern of the life and career of Vojtech Jírovec—or Adalbert Gyrowetz, as he was known in German-speaking and wider European circles. A great scholar who was encouraged in music, Gyrowetz travelled through many of the great cities of the time and along the way met and befriended composers such as Haydn, Mozart and Beethoven. Of these three, it was the style of Haydn to which he adhered.

Gyrowetz's devotion to the style, as well as the person, of his friend Haydn is nowhere more clear than in his string quartets, and some early publications wrongly attributed some of his works to Haydn. Gyrowetz himself made no secret of Haydn's influence on him, writing about this in his autobiography. By the end of his life in 1850 he had written more than 50 string quartets.

‘Sheer delight. Anyone who enjoys Haydn should find himself happily at home in these works’ (Crisis, USA)

'The performances are superb, with neat, exciting playing … this disc cannot be recommended too highly' (Early Music Review)

'I enjoyed this release: it is quite a treat for the curious listener' (International Record Review)