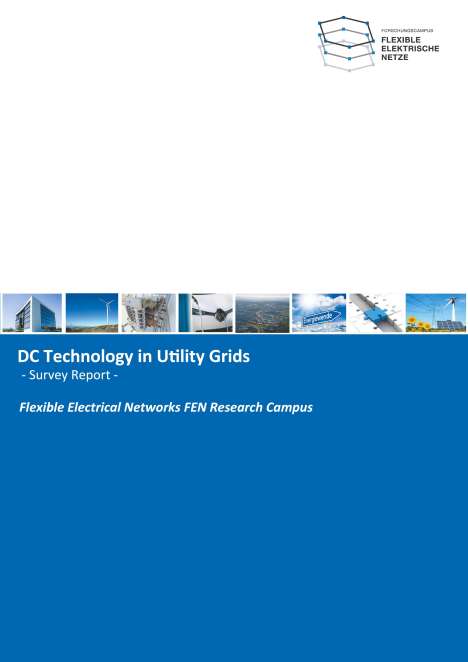 The assembly of this study started in 2013 during the preparation of the foundation of the Flexible Electrical Networks (FEN) Research Campus, an institution supported by the German Federal Ministry of Education and Science, concentrating on DC technology in power grids as an enabler for the energy transition. It reflects the state-of-the-art and research needs of DC technology against the background of application in public grids up until the year 2015. Topics as components, control, management and automation, high-, medium, and low-voltage grid concepts as well as social dimensions, economics, and impact on living beings are considered. After substantial editorial effort, its first public edition has become ready now.
The aim of FEN is to investigate and to develop flexible power grids. Such grid will safeguard the future energy supply with a high share of fluctuating and decentralized renewable energy sources. At the same time, these grids will enable a reliable and affordable energy supply in the future. The objective is to provide new technologies and concepts for the security and quality of the energy supply in the transmission and distribution grids.
To pursue this goal, the use of direct-current (DC) technology, based on power electronics, automation and communication technologies, plays an important role. Although DC technology is not yet established as a standard technology in the public electrical power supply system, its high potential has been widely recognized. The use of DC is an enabler to make the future energy supply system more economical than a system based on alternating-current (AC), because of its superior properties in handling distributed and fluctuation power generation. Indeed, DC connections are already the most cost-efficient solution in cases of very high-power long-distance point-to-point transmission of electricity or via submarine cables. The objective of the FEN Research Campus is now to achieve and demonstrate feasibility of DC as a standard solution for future electrical grids, as described in this study.