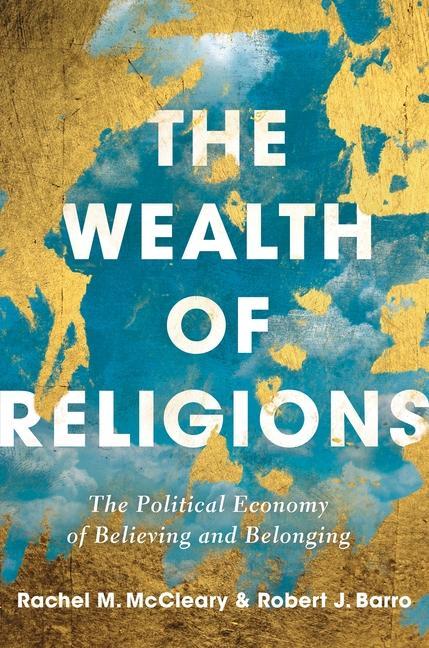 Which countries grow faster economically--those with strong beliefs in heaven and hell or those with weak beliefs in them? Does religious participation matter? Why do some countries experience secularization while others are religiously vibrant? In The Wealth of Religions, Rachel McCleary and Robert Barro draw on their long record of pioneering research to examine these and many other aspects of the economics of religion. Places with firm beliefs in heaven and hell measured relative to the time spent in religious activities tend to be more productive and experience faster growth. Going further, there are two directions of causation: religiosity influences economic performance and economic development affects religiosity. Dimensions of economic development--such as urbanization, education, health, and fertility--matter too, interacting differently with religiosity. State regulation and subsidization of religion also play a role. The Wealth of Religions addresses the effects of religious beliefs on character traits such as work ethic, thrift, and honesty; the Protestant Reformation and its long-term effects on education and religious competition; Communism's suppression of and competition with religion; the effects of Islamic laws and regulations on the functioning of markets and, hence, on the long-term development of Muslim countries; why some countries have state religions; analogies between religious groups and terrorist organizations; the violent origins of the Dalai Lama's brand of Tibetan Buddhism; and the use by the Catholic Church of saint-making as a way to compete against the rise of Protestant Evangelicals.

Rachel M. McCleary is Senior Research Fellow, Taubman Center, Harvard Kennedy School of Government, Harvard University, Research Fellow of the Hoover Institution, Stanford University, and Visiting Scholar, American Enterprise Institute. McCleary's work is interdisciplinary with theoretical grounding in the fields of political science, sociology, and economics. Within these disciplines, she conducts research on the political economy of religion. Her research focuses on how religion interacts with economic performance and the political and social behavior of individuals and institutions across societies. McCleary studies how religious beliefs and practices influence productivity, economic growth, and the maintenance of political institutions such as democracy.