Riaan Eksteen: The Role of the Highest Courts of the United States of America and South Africa, and the European Court of Justice in Foreign Affairs

Riaan Eksteen
The Role of the Highest Courts of the United States of America and South Africa, and the European Court of Justice in Foreign Affairs
Buch 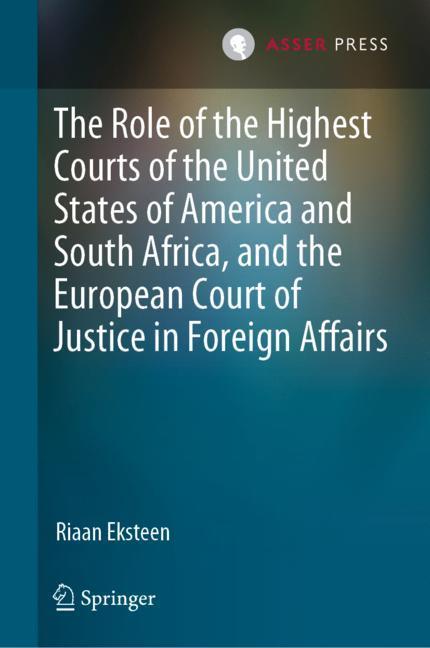 This book deals with what the author considers a sorely neglected question, namely the role of the judiciary in states' foreign policy processes. Eksteen argues that the impact of the judiciary on foreign affairs is understudied and that recognition of its role in foreign affairs is now due. This makes it a ground-breaking scholarly contribution that should first of all prove of value to students, scholars, researchers and practitioners in the two broad fields of politics and law for the wide scope of issues it covers and the very comprehensive reference lists it contains. Secondly, professionals working within politics, including members of the legislatures of the United States, the European Union and South Africa, as well as members of the judiciaries there, should find this book of benefit.
A detailed examination has been undertaken of the role of the United States Supreme Court, the two high courts in South Africa, namely the Constitutional Court and the Supreme Court of Appeal, and the European Court of Justice of the European Union, in foreign affairs. The author substantiates the unmistakable fact that these Courts have become involved in and influence foreign affairs. Furthermore, that they have not shied away from using their judicial authority when dealing with cases touching on foreign affairs and especially presidential overreach.
The lack of recognition of the judiciary's role in foreign affairs is still noticeable in Foreign Policy Analysis (FPA) literature. This book concludes that FPA has to accept and give proper recognition to the judiciary and its increasing relevance in foreign affairs.
Dr. Riaan Eksteen is a Former South African Ambassador residing in Namibia; from 1968-1973 he served at the South African Embassy in Washington D. C.; between 1976-1994, he subsequently served as Ambassador and Head of Mission at the U. N. in New York (1976-81), in Namibia (1990-91), at the U. N. in Geneva (1992-94), and in Turkey, with accreditation also to Azerbaijan, Kyrgyzstan, Turkmenistan and Uzbekistan (1995-97). He obtained his Ph. D. from the University of Johannesburg in October 2018.