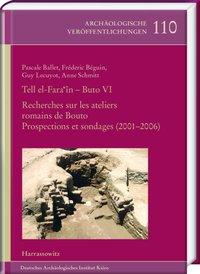 Buto, in the western Egyptian Delta, is mainly known for its pre- and protohistoric occupations, currently being explored by the Deutsches Archäologisches Institut (Cairo). In order to investigate the Graeco-Roman and Byzantine settlement, partly revealed by the Egypt Exploration Society (EES) in the 1960s, a program was launched in 2001, directed by Pascale Ballet. In the north east of the site, the EES had excavated a pottery workshop yielding a black polished ware, influenced by Mediterranean black glazed wares. Using topographical and geophysical surveys from 2001, the excavations in the northern part of the city, conducted from 2002 to 2004, unearthed two main kinds of workshops and productions from the Early Roman period. The first one, entirely new, produced imitations of "sigillata," using tubes, like in Italy and Gaul, to enable the hot gases to go through the stack of pots preventing any contact with them. It is a significant example of a transfer of technology from the Western Mediterranean area, without excluding an Eastern influence. The second type of workshop, also entirely new, was devoted to common wares, sometimes with painting, heralding the style of the Late Roman / Byzantine period.
Buto was probably one of the most active centers for pottery production in the Delta during the Graeco-Roman period, and the discovery of technology previously unknown in Egypt is a new contribution to the history of pottery manufacture in the East Mediterranean area. The present study presents latest findings and samples.
Text is in French.