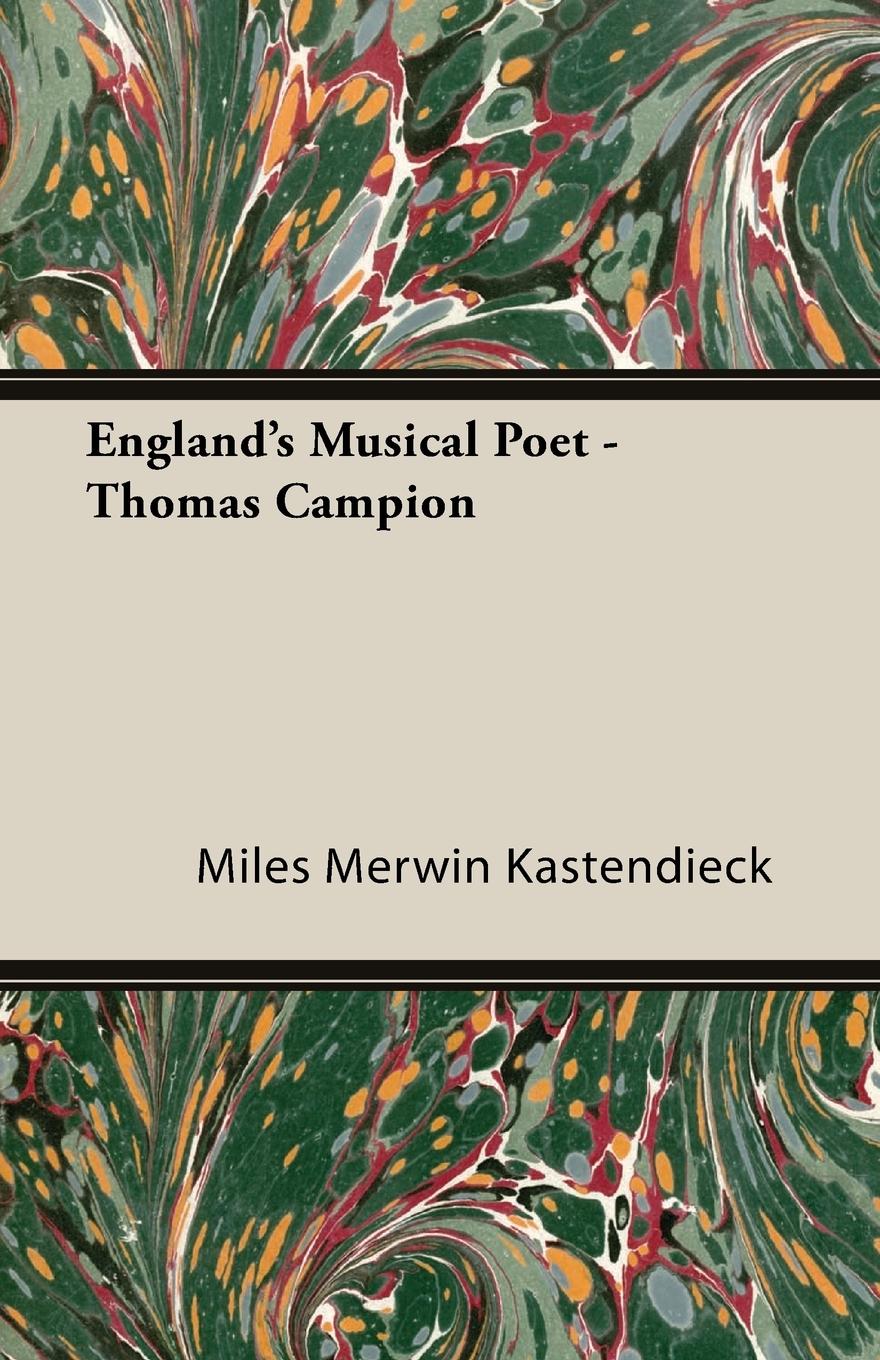 England's Musical Poet THOMAS CAMPION By Miles Merwin. Kastendieck New York . Printed in the United States of America To My Father PREFACE THIS book serves to reveal., through a close scrutiny of the works of Thomas Campion., the interrelationship of poetry and music which created one of the great phenomena of English literature the Elizabethan lyric. It presents an entirely new approach to Campion by recognising in him the musician as poet and the poet-musician whereas in the past he has been considered only as a poet. He emerges the index and exponent of his age in its expression of poetry and music England's Musical Poet. In the course of treatment., I have shown how music had a material effect in conditioning the Elizabethan lyric,, how poets wrote lyrics to be sung., and composers sought singable lyrics. Together they created an art form called the ay re wherein poetry and music were equally balanced. In all prob ability many of the anonymous lyrics of the age originated in this manner., while Campion's ayres attest the ability of one man to write both words and music. Since the secret of their effectiveness lies in associating words and notes together, the spontaneity of the Elizabethan lyric may be explained through the influence of music. The book evolved from two circumstances first., the comparatively recent monumental edition of the Elizabethan songbooks by Dr. Edward H. Fellowes and secondly, the juxtaposition of the study of English literature and the study of music in my pursuit of education culminating in graduate work at Yale. Without Percival Vivian's authoritative edition of Campion's Works and Dr. Fellowes scholarly achievement, this book 8 PREFACE could not have been written. Even with these., it was necessary to consult the originals , and I am grateful to the authorities of the Harvard Library for photostats of the 1601 Booke of Ayres, and of the British Museum for photostats of the other song books. I welcome this opportunity to thank a triumvirate of Yale professors for their help John M. Berdan, for his thorough belief in my ideas Alexander M. Witherspoon, for his critical appraisal of the manuscript and Bruce Simonds, for his defence of the musical interpretation. To these should be added William Lyon Phelps for his infectious enthusiasm upon reading the finished book and Dorothea Walker Edge, for her meticulous proof-reading of the manuscript. M. M. K. February 1938 CONTENTS I. WORDS AND MUSIC IN THREE CENTURIES OF SONG 13 II. MUSIC AND POETRY IN THE ELIZABETHAN AGE 2-7 III. THE CASE FOR THOMAS CAMPION 4Z IV. A BOOKE OF AYRES 54 V, THE POETS ART OF ENGLISH POESY JI VI. THE MUSICIAN AS POET 103 VII. THE MUSICAL POET Il6 fill. THE POET AS MUSICIAN l6l. IX. CONCLUSION 197 BIBLIOGRAPHY 1OI ENGLANDS MUSICAL POET THOMAS CAMPION