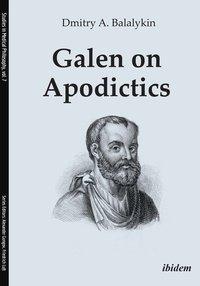 This book is dedicated to one of the topical issues of the history and philosophy of medicine-the analysis of the research method of Galen of Pergamon, an outstanding physician of Antiquity (2nd century AD). Galen's works, on the one hand, were the outcome of the Hippocratic tradition and its development in medicine for more than 500 years and, on the other hand, have determined the further development of medical theory and practice up to the Scientific Revolution in the 17th-19th centuries.

Dmitry A. Balalykin argues that Galen used the apodictic method in the analysis of the phenomena of medical theory and practice. The application of the concept of "apodictics" in relation to the events in the history of medicine is still debatable, although there is no doubt about the use of this term towards, for example, the history of mathematics. The author analyzes a significant amount of sources, researching the development of the apodictic method in medicine before Galen and pointing to those key innovations that were applied by him. The synthesis of the philosophical theory of clinical practice in the works of the great physician of Antiquity is the prime focus of this book. It is intended for scholars who deal with various issues of the history and philosophy of the natural sciences, primarily medicine, and also a wide readership interested in the history of Antiquity and the history of science.