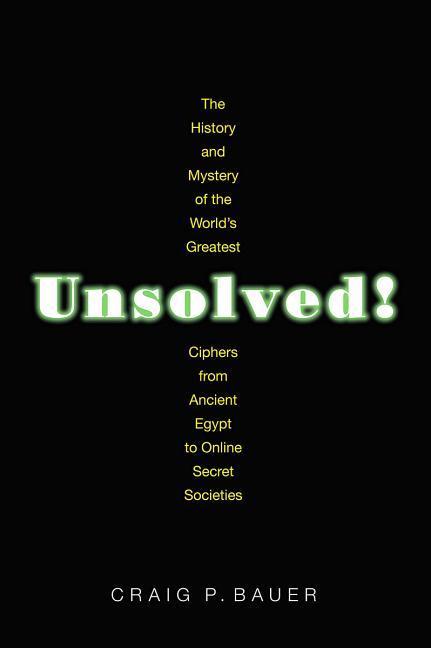 In 1953, a man was found dead from cyanide poisoning near the Philadelphia airport with a picture of a Nazi aircraft in his wallet. Taped to his abdomen was an enciphered message. In 1912, a book dealer named Wilfrid Voynich came into possession of an illuminated cipher manuscript once belonging to Emperor Rudolf II, who was obsessed with alchemy and the occult. Wartime codebreakers tried--and failed--to unlock the book's secrets, and it remains an enigma to this day. In this lively and entertaining book, Craig Bauer examines these and other vexing ciphers yet to be cracked. Some may reveal the identity of a spy or serial killer, provide the location of buried treasure, or expose a secret society--while others may be elaborate hoaxes. Unsolved! begins by explaining the basics of cryptology, and then explores the history behind an array of unsolved ciphers. It looks at ancient ciphers, ciphers created by artists and composers, ciphers left by killers and victims, Cold War ciphers, and many others. Some are infamous, like the ciphers in the Zodiac letters, while others were created purely as intellectual challenges by figures such as Nobel Prize-winning physicist Richard P. Feynman. Bauer lays out the evidence surrounding each cipher, describes the efforts of geniuses and eccentrics--in some cases both--to decipher it, and invites readers to try their hand at puzzles that have stymied so many others.