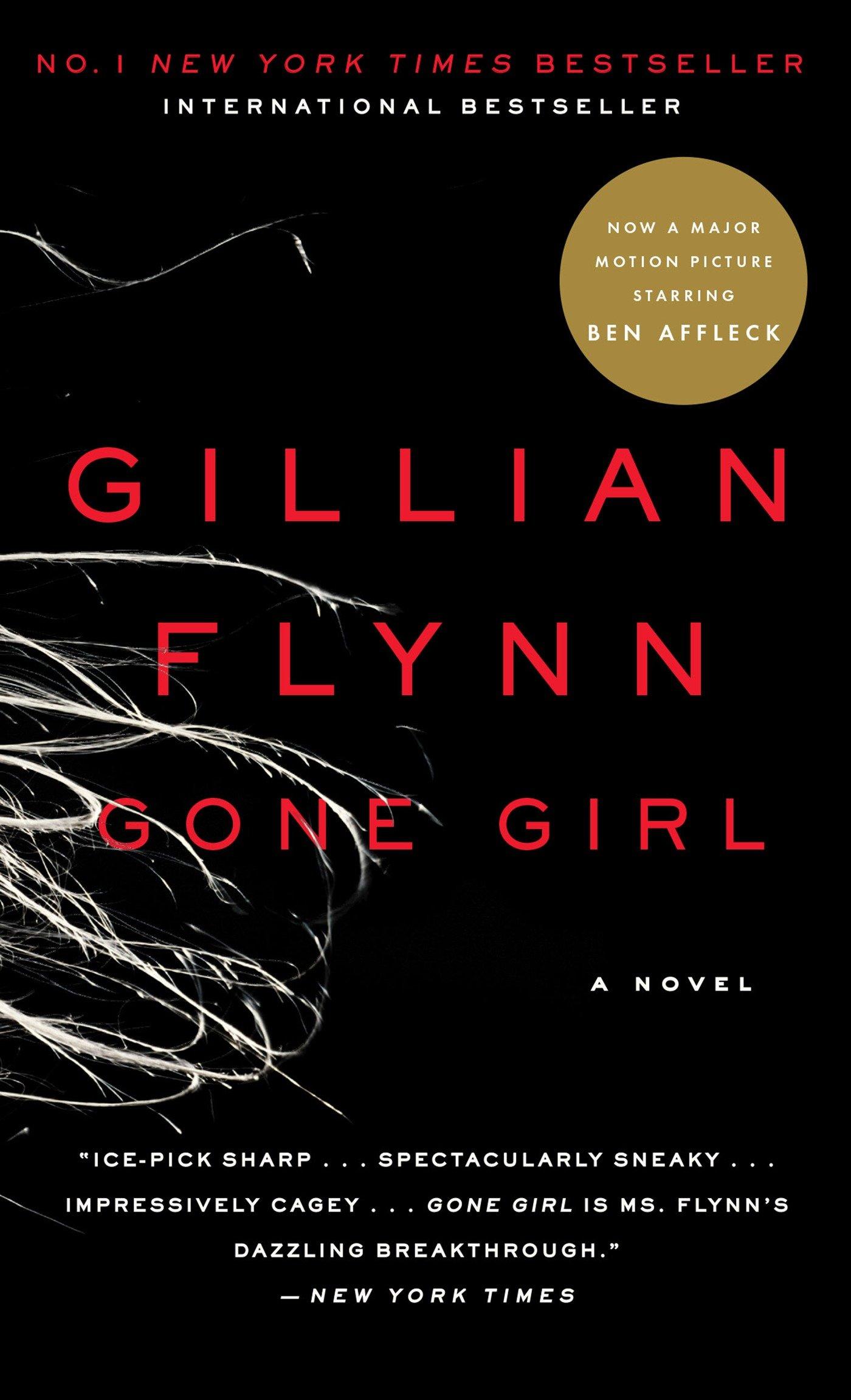 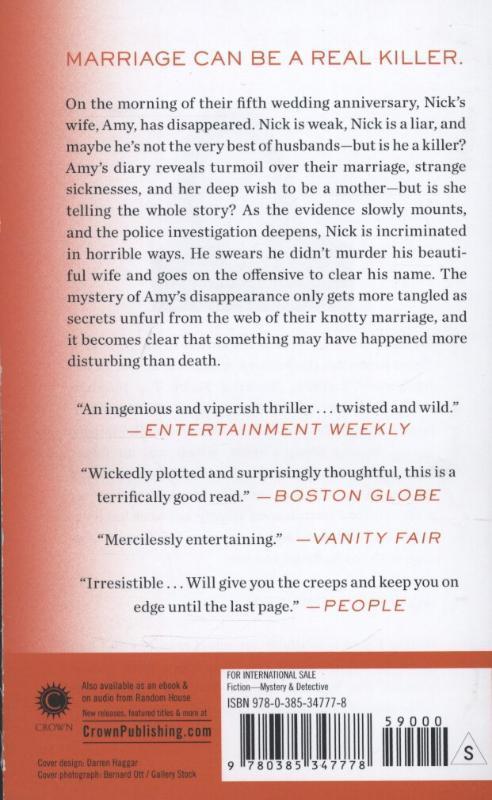 Marriage can be a real killer. One of the most critically acclaimed suspense writers of our time, New York Times bestseller Gillian Flynn takes that statement to its darkest place in this unputdownable masterpiece about a marriage gone terribly, terribly wrong. The Chicago Tribune proclaimed that her work "draws you in and keeps you reading with the force of a pure but nasty addiction." Gone Girl's toxic mix of sharp-edged wit and deliciously chilling prose creates a nerve-fraying thriller that confounds you at every turn. On a warm summer morning in North Carthage, Missouri, it is Nick and Amy Dunne's fifth wedding anniversary. Presents are being wrapped and reservations are being made when Nick's clever and beautiful wife disappears from their rented McMansion on the Mississippi River. Husband-of-the-Year Nick isn't doing himself any favors with cringe-worthy daydreams about the slope and shape of his wife's head, but passages from Amy's diary reveal the alpha-girl perfectionist could have put anyone dangerously on edge. Under mounting pressure from the police and the media - as well as Amy's fiercely doting parents - the town golden boy parades an endless series of lies, deceits, and inappropriate behavior. Nick is oddly evasive, and he's definitely bitter - but is he really a killer? As the cops close in, every couple in town is soon wondering how well they know the one that they love. With his twin sister, Margo, at his side, Nick stands by his innocence. Trouble is, if Nick didn't do it, where is that beautiful wife? And what was in that silvery gift box hidden in the back of her bedroom closet? With her razor-sharp writing and trademark psychological insight, Gillian Flynn delivers a fast-paced, devilishly dark, and ingeniously plotted thriller that confirms her status as one of the hottest writers around.

"Ice-pick-sharp... Spectacularly sneaky... Impressively cagey... Gone Girl is Ms. Flynn's dazzling breakthrough. It is wily, mercurial, subtly layered and populated by characters so well imagined that they're hard to part with - even if, as in Amy's case, they are already departed. And if you have any doubts about whether Ms. Flynn measures up to Patricia Highsmith's level of discreet malice, go back and look at the small details. Whatever you raced past on a first reading will look completely different the second time around."
- Janet Maslin, New York Times

"An ingenious and viperish thriller... It's going to make Gillian Flynn a star... The first half of Gone Girl is a nimble, caustic riff on our Nancy Grace culture and the way in which ''The butler did it'' has morphed into ''The husband did it.'' The second half is the real stunner, though. Now I really am going to shut up before I spoil what instantly shifts into a great, breathless read. Even as Gone Girl grows truly twisted and wild, it says smart things about how tenuous power relations are between men and women, and how often couples are at the mercy of forces beyond their control. As if that weren't enough, Flynn has created a genuinely creepy villain you don't see coming. People love to talk about the banality of evil. You're about to meet a maniac you could fall in love with."
- Jeff Giles, Entertainment Weekly

"An irresistible summer thriller with a twisting plot worthy of Alfred Hitchcock. Burrowing deep into the murkiest corners of the human psyche, this delectable summer read will give you the creeps and keep you on edge until the last page."
- People (four stars)

"[A] thoroughbred thriller about the nature of identity and the terrible secrets that can survive and thrive in even the most intimate relationships. Gone Girl begins as a whodunit, but by the end it will have you wondering whether there's any such thing as a who at all."
- Lev Grossman, Time

"How did things get so bad? That's the reason to read this book. Gillian Flynn - whose award-winning Dark Places and Sharp Objects also shone a dark light on weird and creepy, not to mention uber dysfunctional characters - delves this time into what happens when two people marry and one spouse has no idea who their beloved really is."
- USA Today, Carol Memmott

"It's simply fantastic: terrifying, darkly funny and at times moving. The minute I finished it I wanted to start it all over again. Admirers of Gillian Flynn's previous books, Sharp Objects and Dark Places , will be ecstatic over Gone Girl , her most intricately twisted and deliciously sinister story, dangerous for any reader who prefers to savor a novel as opposed to consuming it whole in one sitting...."
- Associated Press, Michelle Weiner

"That adage of no one knows what goes on behind closed doors moves the plot of Gone Girl , Gillian Flynn's suspenseful psychological thriller... Flynn's unpredictable plot of Gone Girl careens down an emotional highway where this couple dissects their marriage with sharp acumen... Flynn has shown her skills at gripping tales and enhanced character studies since her debut Sharp Objects , which garnered an Edgar nod, among other nominations. Her second novel Dark Places made numerous best of lists. Gone Girl reaffirms her talent."
- South Florida Sun-Sentinel , Oline Cogdill

"A great crime novel, however, is an unstable thing, entertainment and literature suspended in some undetermined solution. Take Gillian Flynn's Gone Girl , the third novel by one of a trio of contemporary women writers (the others are Kate Atkinson and Tana French) who are kicking the genre into a higher gear... You couldn't say that this is a crime novel that's ultimately about a marriage, which would make

#1 NEW YORK TIMES BESTSELLER • The "mercilessly entertaining" (Vanity Fair) instant classic "about the nature of identity and the terrible secrets that can survive and thrive in even the most intimate relationships" (Lev Grossman, Time).

On a warm summer morning in North Carthage, Missouri, it is Nick and Amy Dunne's fifth wedding anniversary. Presents are being wrapped and reservations are being made when Nick's clever and beautiful wife disappears. Husband-of-the-Year Nick isn't doing himself any favors with cringe-worthy daydreams about the slope and shape of his wife's head, but passages from Amy's diary reveal the alpha-girl perfectionist could have put anyone dangerously on edge. Under mounting pressure from the police and the media-as well as Amy's fiercely doting parents-the town golden boy parades an endless series of lies, deceits, and inappropriate behavior. Nick is oddly evasive, and he's definitely bitter-but is he really a killer?

"Absorbing . . . In masterly fashion, Flynn depicts the unraveling of a marriage-and of a recession-hit Midwest-by interweaving the wife's diary entries with the husband's first-person account."-New Yorker

"Ms. Flynn writes dark suspense novels that anatomize violence without splashing barrels of blood around the pages . . . Ms. Flynn has much more up her sleeve than a simple missing-person case. As Nick and Amy alternately tell their stories, marriage has never looked so menacing, narrators so unreliable."-The Wall Street Journal

"The story unfolds in precise and riveting prose . . . even while you know you're being manipulated, searching for the missing pieces is half the thrill of this wickedly absorbing tale."-O: The Oprah Magazine

Nick Dunne
the day of

When I think of my wife, I always think of her head. The shape of
it, to begin with. The very first time I saw her, it was the back of the
head I saw, and there was something lovely about it, the angles of it.
Like a shiny, hard corn kernel or a riverbed fossil. She had what the
Victorians would call finely shaped head. You could imagine the
skull quite easily.

I'd know her head anywhere.

And what's inside it. I think of that too: her mind. Her brain, all
those coils, and her thoughts shuttling through those coils like fast,
frantic centipedes. Like a child, I picture opening her skull, unspooling
her brain and sifting through it, trying to catch and pin down
her thoughts. What are you thinking, Amy? The question I've asked
most often during our marriage, if not out loud, if not to the person
who could answer. I suppose these questions stormcloud over every
marriage: What are you thinking? How are you feeling? Who are
you? What have we done to each other? What will we do?

My eyes flipped open at exactly six a. m. This was no avian fluttering
of the lashes, no gentle blink toward consciousness. The awakening
was mechanical. A spooky ventriloquist- dummy click of the lids:
The world is black and then, showtime! 6- 0- 0 the clock said - in my
face, first thing I saw. 6- 0- 0. It felt different. I rarely woke at such a
rounded time. I was a man of jagged risings: 8: 43, 11: 51, 9: 26. My
life was alarmless.

At that exact moment, 6- 0- 0, the sun climbed over the skyline of
oaks, revealing its full summer angry- god self. Its reflection flared
across the river toward our house, a long, blaring finger aimed at me
through our frail bedroom curtains. Accusing: You have been seen.
You will be seen.

I wallowed in bed, which was our New York bed in our new house,
which we still called the new house, even though we'd been back here
for two years. It's a rented house right along the Mississippi River,
a house that screams Suburban Nouveau Riche, the kind of place
I aspired to as a kid from my split- level, shag- carpet side of town.
The kind of house that is immediately familiar: a generically grand,
unchallenging, new, new, new house that my wife would - and did -
detest.

"Should I remove my soul before I come inside?" Her first line upon
arrival. It had been a compromise: Amy demanded we rent, not buy,
in my little Missouri hometown, in her firm hope that we wouldn't
be stuck here long. But the only houses for rent were clustered in
this failed development: a miniature ghost town of bank- owned,
recession- busted, price- reduced mansions, a neighborhood that closed
before it ever opened. It was a compromise, but Amy didn't see it that
way, not in the least. To Amy, it was a punishing whim on my part, a
nasty, selfish twist of the knife. I would drag her, caveman- style, to a
town she had aggressively avoided, and make her live in the kind of
house she used to mock. I suppose it's not a compromise if only one of
you considers it such, but that was what our compromises tended to
look like. One of us was always angry. Amy, usually.

Do not blame me for this particular grievance, Amy. The Missouri
Grievance. Blame the economy, blame bad luck, blame my parents,
blame your parents, blame the Internet, blame people who use the
Internet. I used to be a writer. I was a writer who wrote about TV
and movies and books. Back when people read things on paper, back
when anyone cared about what I thought. I'd arrived in New York in
the late '90s, the last gasp of the glory days, although no one knew it
then. New Yo