George R. R. Martin
A Song of Ice and Fire 04. A Feast for Crows
Buch 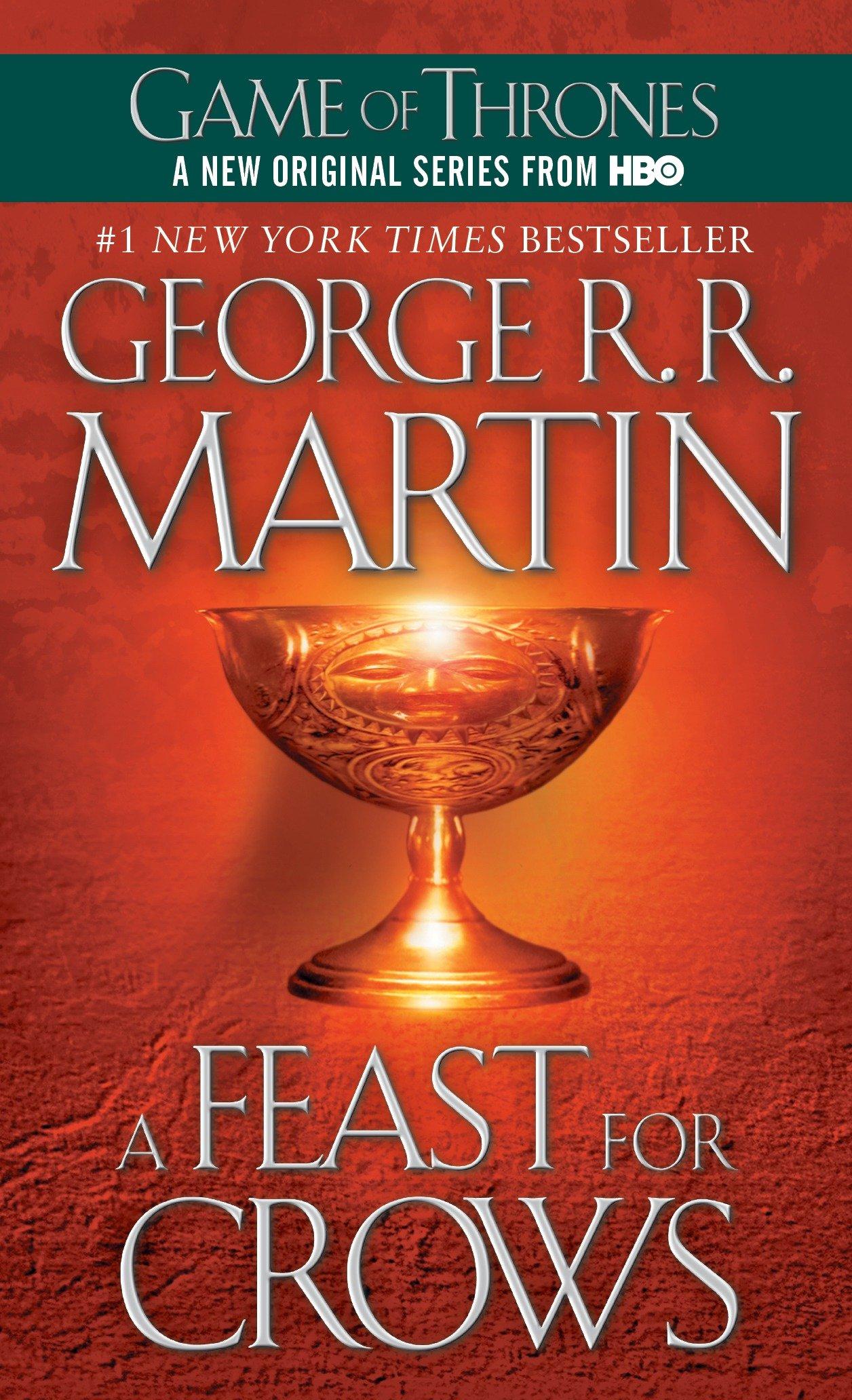 Weitere Ausgaben von A Song of Ice and Fire 04. A Feast for Crows

The next instalment of "A Song of Ice and Fire" begins right where "A Storm of Swords" left off. Preparations are underway for the next battle for power.

THE BOOK BEHIND THE FOURTH SEASON OF THE ACCLAIMED HBO SERIES GAME OF THRONES
Few books have captivated the imagination and won the devotion and praise of readers and critics everywhere as has George R. R. Martin's monumental epic cycle of high fantasy. Now, in A Feast for Crows , Martin delivers the long-awaited fourth book of his landmark series, as a kingdom torn asunder finds itself at last on the brink of peace . . . only to be launched on an even more terrifying course of destruction.
A FEAST FOR CROWS
It seems too good to be true. After centuries of bitter strife and fatal treachery, the seven powers dividing the land have decimated one another into an uneasy truce. Or so it appears. . . . With the death of the monstrous King Joffrey, Cersei is ruling as regent in King's Landing. Robb Stark's demise has broken the back of the Northern rebels, and his siblings are scattered throughout the kingdom like seeds on barren soil. Few legitimate claims to the once desperately sought Iron Throne still exist - or they are held in hands too weak or too distant to wield them effectively. The war, which raged out of control for so long, has burned itself out.
But as in the aftermath of any climactic struggle, it is not long before the survivors, outlaws, renegades, and carrion eaters start to gather, picking over the bones of the dead and fighting for the spoils of the soon-to-be dead. Now in the Seven Kingdoms, as the human crows assemble over a banquet of ashes, daring new plots and dangerous new alliances are formed, while surprising faces - some familiar, others only just appearing - are seen emerging from an ominous twilight of past struggles and chaos to take up the challenges ahead.
It is a time when the wise and the ambitious, the deceitful and the strong will acquire the skills, the power, and the magic to survive the stark and terrible times that lie before them. It is a time for nobles and commoners, soldiers and sorcerers, assassins and sages to come together and stake their fortunes . . . and their lives. For at a feast for crows, many are the guests - but only a few are the survivors.
From the Hardcover edition.

"Of those who work in the grand epic-fantasy tradition, Martin is by far the best.... [He] is a tense, surging, insomnia-inflicting plotter and a deft and inexhaustible sketcher of personalities.... This is as good a time as any to proclaim him the American Tolkien." - Time Magazine
"The only fantast series I'd put on a level with J. R.R. Tolkein's The Lord of the Rings.... It's a fantasy series for hip, smart people, even those who don't read fantasy.... If you're new to the series, you must begin with Book 1, A Game of Thrones . Once you're hooked.... you'll be like the rest of us fans, gnawing your knuckles until book 5" - Marta Salij, Detroit Free Press
"THE MOST impressive modern fantasy, both in terms of conception and execution, is George R. R. Martin's A Song of Ice and Fire . ... A masterpiece that will be mentioned with the great works of fantasy." - Contra Costa Times
"Long-awaited doesn't begin to describe this fourth installment in bestseller Martin's staggeringly epic Song of Ice and Fire." - Publishers Weekly
"Grabs hold and won't let go. It's brilliant." - Robert Jordan
"Such a splendid tale and such a fantistorical! I read my eyes out." - Anne McCaffrey
"Fantasy fans will feast!" - Associated Press

Cersei
She dreamt she sat the Iron Throne, high above them all.
The courtiers were brightly colored mice below. Great lords and proud ladies knelt before her. Bold young knights laid their swords at her feet and pleaded for her favors, and the queen smiled down at them. Until the dwarf appeared as if from nowhere, pointing at her and howling with laughter. The lords and ladies began to chuckle too, hiding their smiles behind their hands. Only then did the queen realize she was naked.
Horrified, she tried to cover herself with her hands. The barbs and blades of the Iron Throne bit into her flesh as she crouched to hide her shame. Blood ran red down her legs, as steel teeth gnawed at her buttocks. When she tried to stand, her foot slipped through a gap in the twisted metal. The more she struggled the more the throne engulfed her, tearing chunks of flesh from her breasts and belly, slicing at her arms and legs until they were slick and red, glistening.
And all the while her brother capered below, laughing. His merriment still echoed in her ears when she felt a light touch on her shoulder, and woke suddenly. For half a heartbeat the hand seemed part of the nightmare, and Cersei cried out, but it was only Senelle. The maid's face was white and frightened.
We are not alone, the queen realized. Shadows loomed around her bed, tall shapes with chainmail glimmering beneath their cloaks. Armed men had no business here.
Where are my guards? Her bedchamber was dark, but for the lantern one of the intruders held on high. I must show no fear. Cersei pushed back sleep-tousled hair, and said, "What do you want of me?" A man stepped into the lantern light, and she saw his cloak was white. "Jaime?" I dreamt of one brother, but the other has come to wake me.
"Your Grace." The voice was not her brother's. "The Lord Commander said come get you." His hair curled, as Jaime's did, but her brother's hair was beaten gold, like hers, where this man's was black and oily. She stared at him, confused, as he muttered about a privy and a crossbow, and said her father's name. I am dreaming still, Cersei thought. I have not woken, nor has my nightmare ended. Tyrion will creep out from under the bed soon and begin to laugh at me.
But that was folly. Her dwarf brother was down in the black cells, condemned to die this very day. She looked down at her hands, turning them over to make certain all her fingers were still there. When she ran a hand down her arm the skin was covered with gooseprickles, but unbroken. There were no cuts on her legs, no gashes on the soles of her feet. A dream, that's all it was, a dream. I drank too much last night, these fears are only humors born of wine. I will be the one laughing, come dusk. My children will be safe, Tommen's throne will be secure, and my twisted little valonqar will be short a head and rotting.
Jocelyn Swyft was at her elbow, pressing a cup on her. Cersei took a sip: water, mixed with lemon squeezings, so tart she spit it out. She could hear the night wind rattling the shutters, and she saw with a strange sharp clarity. Jocelyn was trembling like a leaf, as frightened as Senelle. Ser Osmund Kettleblack loomed over her. Behind him stood Ser Boros Blount, with a lantern. At the door were Lannister guardsmen with gilded lions shining on the crests of their helmets. They looked afraid as well. Can it be? the queen wondered. Can it be true?
She rose, and let Senelle slip a bedrobe over her shoulders to hide her nakedness. Cersei belted it herself, her fingers stiff and clumsy. "My lord father keeps guards about him, night and day," she said. Her tongue felt thick. She took another swallow of lemon water and sloshed it round her mouth to freshen her breath. A m