George R. R. Martin
A Song of Ice and Fire 01. A Game of Thrones
Buch 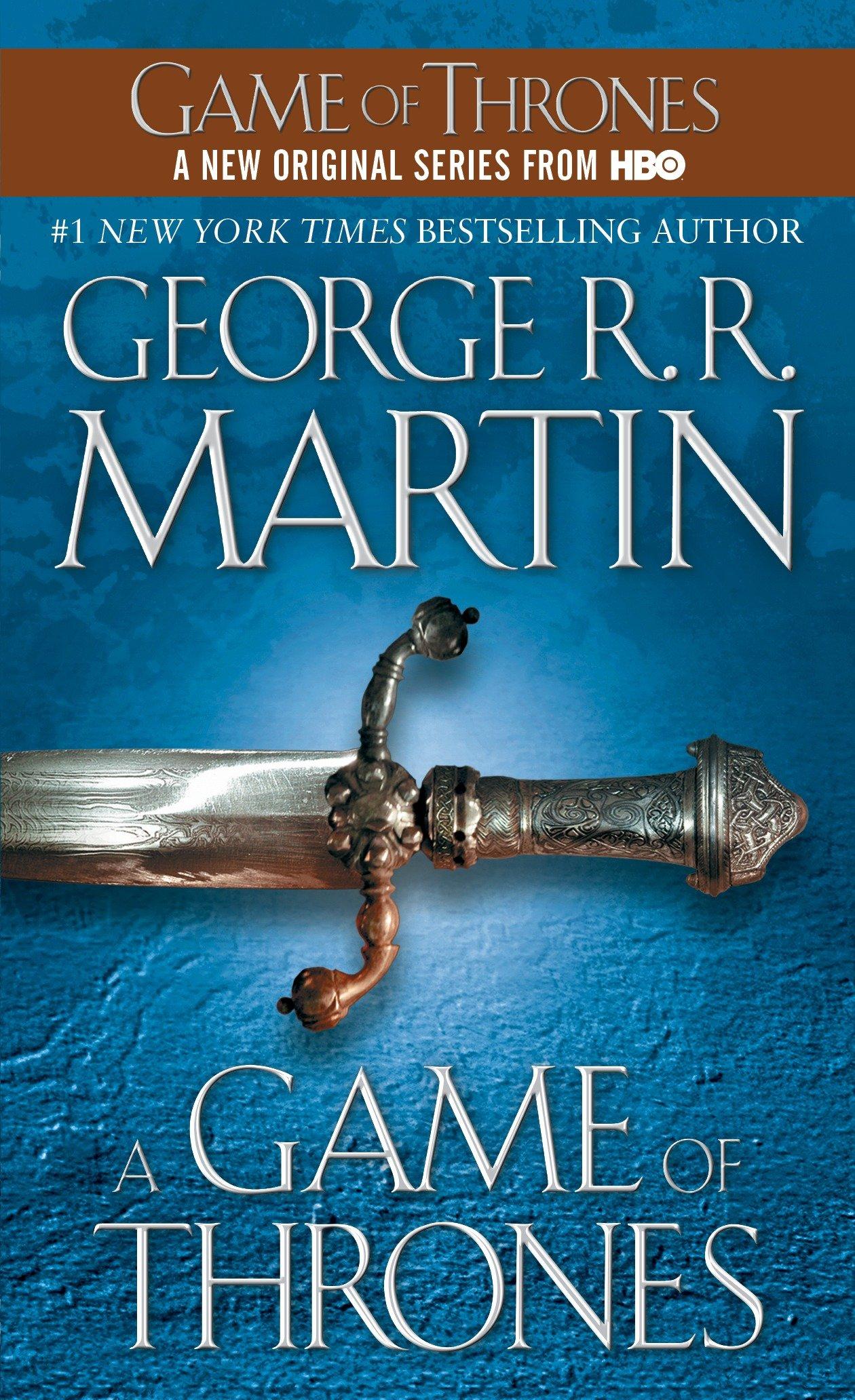 Weitere Ausgaben von A Song of Ice and Fire 01. A Game of Thrones

A NEW ORIGINAL SERIES, NOW ON HBO.
Here is the first volume in George R. R. Martin's magnificent cycle of novels that includes A Clash of Kings and A Storm of Swords . As a whole, this series comprises a genuine masterpiece of modern fantasy, bringing together the best the genre has to offer. Magic, mystery, intrigue, romance, and adventure fill these pages and transport us to a world unlike any we have ever experienced. Already hailed as a classic, George R. R. Martin's stunning series is destined to stand as one of the great achievements of imaginative fiction.
A GAME OF THRONES
Long ago, in a time forgotten, a preternatural event threw the seasons out of balance. In a land where summers can last decades and winters a lifetime, trouble is brewing. The cold is returning, and in the frozen wastes to the north of Winterfell, sinister and supernatural forces are massing beyond the kingdom's protective Wall. At the center of the conflict lie the Starks of Winterfell, a family as harsh and unyielding as the land they were born to. Sweeping from a land of brutal cold to a distant summertime kingdom of epicurean plenty, here is a tale of lords and ladies, soldiers and sorcerers, assassins and bastards, who come together in a time of grim omens.
Here an enigmatic band of warriors bear swords of no human metal; a tribe of fierce wildlings carry men off into madness; a cruel young dragon prince barters his sister to win back his throne; and a determined woman undertakes the most treacherous of journeys. Amid plots and counterplots, tragedy and betrayal, victory and terror, the fate of the Starks, their allies, and their enemies hangs perilously in the balance, as each endeavors to win that deadliest of conflicts: the game of thrones.

"The major fantasy of the decade . . . compulsively readable." - Denver Post
"We have been invited to a grand feast and pageant: George R. R. Martin has unveiled for us an intensely realized, romantic but realistic world." - Chicago Sun-Times
"A Best Book of 1996: Martin makes a triumphant return to high fantasy . . . [with] superbly developed characters, accomplished prose, and sheer bloodymindedness." - Publishers Weekly , starred review
"A splendid saga . . . . Inventive and intricately plotted." - BookPage
"Magic . . . George R. R.Martin's first fantasy epic [is set] well above the norms of the genre." - Locus
"Such a splendid tale and such a fantasticorical! I read my eyes out and couldn't stop 'til I finished and it was dawn." - Anne McCaffrey

Winter is coming. Such is the stern motto of House Stark, the northernmost of the fiefdoms that owe allegiance to King Robert Baratheon in far-off King's Landing. There Eddard Stark of Winterfell rules in Robert's name. There his family dwells in peace and comfort: his proud wife, Catelyn; his sons Robb, Brandon, and Rickon; his daughters Sansa and Arya; and his bastard son, Jon Snow. Far to the north, behind the towering Wall, lie savage Wildings and worse-unnatural things relegated to myth during the centuries-long summer, but proving all too real and all too deadly in the turning of the season.

Yet a more immediate threat lurks to the south, where Jon Arryn, the Hand of the King, has died under mysterious circumstances. Now Robert is riding north to Winterfell, bringing his queen, the lovely but cold Cersei, his son, the cruel, vainglorious Prince Joffrey, and the queen's brothers Jaime and Tyrion of the powerful and wealthy House Lannister-the first a swordsman without equal, the second a dwarf whose stunted stature belies a brilliant mind. All are heading for Winterfell and a fateful encounter that will change the course of kingdoms.

Meanwhile, across the Narrow Sea, Prince Viserys, heir of the fallen House Targaryen, which once ruled all of Westeros, schemes to reclaim the throne with an army of barbarian Dothraki-whose loyalty he will purchase in the only coin left to him: his beautiful yet innocent sister, Daenerys.

The morning had dawned clear and cold, with a crispness that hinted at the end of summer. They set forth at daybreak to see a man beheaded, twenty in all, and Bran rode among them, nervous with excitement. This was the first time he had been deemed old enough to go with his lord father and his brothers to see the king's justice done. It was the ninth year of summer, and the seventh of Bran's life.
The man had been taken outside a small holdfast in the hills. Robb thought he was a wildling, his sword sworn to Mance Rayder, the King-beyond-the-Wall. It made Bran's skin prickle to think of it. He remembered the hearth tales Old Nan told them. The wildlings were cruel men, she said, slavers and slayers and thieves. They consorted with giants and ghouls, stole girl children in the dead of night, and drank blood from polished horns. And their women lay with the Others in the Long Night to sire terrible half-human children.
But the man they found bound hand and foot to the holdfast wall awaiting the king's justice was old and scrawny, not much taller than Robb. He had lost both ears and a finger to frostbite, and he dressed all in black, the same as a brother of the Night's Watch, except that his furs were ragged and greasy.
The breath of man and horse mingled, steaming, in the cold morning air as his lord father had the man cut down from the wall and dragged before them. Robb and Jon sat tall and still on their horses, with Bran between them on his pony, trying to seem older than seven, trying to pretend that he'd seen all this before. A faint wind blew through the holdfast gate. Over their heads flapped the banner of the Starks of Winterfell: a grey direwolf racing across an ice-white field.
Bran's father sat solemnly on his horse, long brown hair stirring in the wind. His closely trimmed beard was shot with white, making him look older than his thirty-five years. He had a grim cast to his grey eyes this day, and he seemed not at all the man who would sit before the fire in the evening and talk softly of the age of heroes and the children of the forest. He had taken off Father's face, Bran thought, and donned the face of Lord Stark of Winterfell.
There were questions asked and answers given there in the chill of morning, but afterward Bran could not recall much of what had been said. Finally his lord father gave a command, and two of his guardsmen dragged the ragged man to the ironwood stump in the center of the square. They forced his head down onto the hard black wood. Lord Eddard Stark dismounted and his ward Theon Greyjoy brought forth the sword. "Ice," that sword was called. It was as wide across as a man's hand, and taller even than Robb. The blade was Valyrian steel, spell-forged and dark as smoke. Nothing held an edge like Valyrian steel.
His father peeled off his gloves and handed them to Jory Cassel, the captain of his household guard. He took hold of Ice with both hands and said, "In the name of Robert of the House Baratheon, the First of his Name, King of the Andals and the Rhoynar and the First Men, Lord of the Seven Kingdoms and Protector of the Realm, by the word of Eddard of the House Stark, Lord of Winterfell and Warden of the North, I do sentence you to die." He lifted the great sword high above his head.
Bran's bastard brother Jon Snow moved closer. "Keep the pony well in hand," he whispered. "And don't look away. Father will know if you do."
Bran kept his pony well in hand, and did not look away.
His father took off the man's head with a single sure stroke. Blood sprayed out across the snow, as red