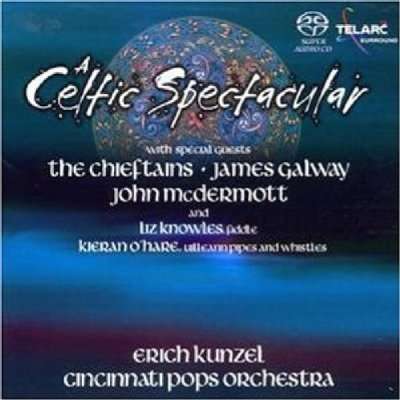 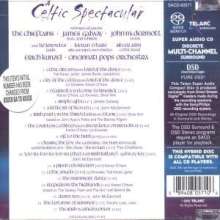 MINT - Magazin für Vinyl-Kultur No. 55
Zeitschrift
EUR 8,90*
Celtic dream;Cry of the celts;O'Farrell's welcome to
Limerick;Simple gifts;A little bit of Heaven;Irish
party in the third class;The Countess Cathleen;Off
to the hunt;Chasing the fox;Too-ra-loo-ra-loo-ra/
Galway bay;A piper celebration;Celtic angels;The
mummer's dance;Steps from the highlands;Danny boy;
The last rose of summer;The irish washerwoman
* feat. The Chieftains, James Galway, John McDermott,
Liz Knowles, Kieran O'Hare
Ireland, with its rich heritage of Celtic, Christian, Scottish, Scandinavian and English influences, has spawned one of the greatest treasures of music among the world’s cultures. A Celtic Spectacular, the latest Telarc recording by Erich Kunzel and the Cincinnati Pops Orchestra, offers some of the most beloved songs and dances associated with the Emerald Isle and its neighboring lands.

Joining the highly acclaimed and musically diverse Cincinnati Pops on this live outing—recorded in March 2001 at Cincinnati Music Hall—are some of the most prominent performers of traditional and popular Irish music in the world, including the Chieftains, flutist James Galway and Irish tenor John McDermott.

The Chieftains, six-time Grammy Award winners, have uncovered the wealth of traditional Irish music that has accumulated over the centuries and made it their own with a style that is as exhilarating as it is definitive. "If there is a more beautiful musical sound in all the world than that made by the Chieftains, I haven’t heard it," declared Houston Post music critic Bob Claypool during a recent Chieftains tour through the U. S.

James Galway is internationally regarded as both a matchless interpreter of the classical repertoire and a consummate entertainer whose charismatic appeal crosses all musical boundaries. His unique flute sound, superb musicianship and dazzling virtuosity have made him one of the most respected and sought after performing artists of our time. Through his extensive tours, numerous best-selling recordings and videos, and frequent television appearances, he has reached vast and diverse audiences worldwide.

Nine releases, three platinum records, five Juno nominations (the Canadian equivalent of the U. S. Grammy) and a solid touring schedule only convey part of the John McDermott story. Throw in international success, a stint with the PBS phenomenon The Irish Tenors, and a solo PBS special, and it’s clear why McDermott has been doing this all his life.

Other guests on A Celtic Spectacular include: violinist Liz Knowles, who has performed and recorded with a wide cross section of jazz, classical and pop performers, including a two-year stint as soloist with the internationally acclaimed Riverdance; Irish-American bagpipist Kieran O’Hare, whose credits include work with Mick Moloney and the Greenfields of America, the Milwaukee Symphony Orchestra, Bonnie Raitt, the Paul Winter Consort and Don Henley; and Silver Arm, a Cincinnati-based Celtic combo that has been an institution in the Southern Ohio Celtic music scene for nearly two decades.

Erich Kunzel has been conducting the Cincinnati Symphony Orchestra since 1965 and the Cincinnati Pops Orchestra since its inception in 1977. He has since led the ensemble to unprecedented success with music lovers worldwide who have discovered the CPO through its performances, television programs and best-selling Telarc recordings.
(concordmusicgroup. com)