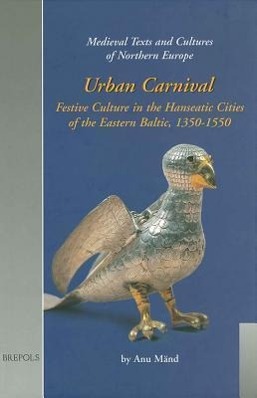 This is a significant new study of the festival culture of northern Europe in the later Middle Ages: more specifically of the German-speaking communities of the great cities of the eastern Baltic littoral in what was then called Livonia, corresponding roughly to the territories of present-day Estonia and Latvia. While subject to a degree of Scandinavian influence, the festival culture of Livonian cities such as Riga, Reval (Tallinn), and Dorpat (Tartu), which were members of the Hanseatic League, substantially overlapped with that of other German-speaking areas, not least the Hanseatic cities of northern Germany. The major part of the book is devoted to the main annual festivals of the merchants' guilds: Christmas, Carnival, the popinjay shoot, and the May Count celebrations. There follows an analysis of specific aspects of the festivals: spatial contexts, finances, food and drink, entertainments (dances, jousts, games), customs and rituals. There is also a concluding glance at changes in festival culture after the Reformation. The study combines close scrutiny of local customs (made possible by the almost miraculous survival of uniquely detailed documentation), contextualization within the wider comparative context of festival culture in late-medieval Europe, and an alterness to significant recent scholarship in both English and German.

This book studies festivals celebrated in Eastern Baltic towns (in the region called Livonia) from c. 1350 until 1550 and provides a comprehensive analysis of local customs set in the wider comparative context of festival culture of medieval Europe. Livonia was a common name used for the territories that covered present-day Estonia and Latvia. The birth of towns in Latvia was a result of the German-Danish conquest in the early thirteenth century and the German expansion eastwards. The towns in Livonia became essentially German: they were granted German city laws and the upper and middle classes consisted of German merchants and artisans. Four largest cities in Livonia-Riga, Reval, Dorpat and Pernau-became members of the Hanseatic League. Hanseatic merchants were the main mediators of festival customs in the Baltic Sea region. The merchants' festivals in medieval Baltic towns had much in common with those celebrated in central German areas, particularly in the Hanseatic towns of northern Germany. The major part of this book is devoted to the main annual festivals of the year: Christmas, Carnival, the popinjay shoot, and the May Count celebrations.