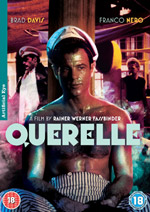 Querelle is a sailor on shore leave in the French port of Brest. Following an argument, in which he stabs and kills his drug-smuggling partner, he seeks shelter in a nearby brothel.

There he befriends the predatory madam, Lysiane (Jeanne Moreau), who leads him into his first homosexual encounter.

Adapted from Jean Genet’s infamous, groundbreaking novel, the final film of celebrated director Rainer Werner Fassbinder's career is a striking, surreal and utterly unique tale of sex and murder that has gone on to become a cult classic.