One Touch of Venus

One Touch of Venus
DVD
DVD 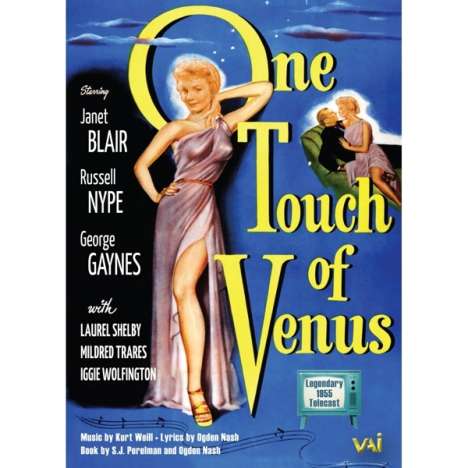 -13%
a-ha - The Movie (OmU)
EUR 14,99**
DVD
EUR 12,99*
One Touch of Venus was Kurt Weill’s most successful musical written for Broadway, and the only “book musical” for which the legendary poet Ogden Nash wrote the lyrics. The 1948 Hollywood film version – shorn of all but a few of the songs – failed to capture the show’s charms. But this 1955 television adaptation, based on the stage production by the Dallas State Fair Musicals, is a delight, retaining nearly all of the glorious score (including such hits as “Speak Low” and “I’m a Stranger Here Myself”) and most of the original book, co-written by Nash and S. J. Perelman. The cast is headed by Janet Blair, Russell Nype, and George Gaynes, and also features a strong supporting cast of brilliant character actors. This DVD presents the complete live telecast, including the original commercials added as a separate bonus feature.