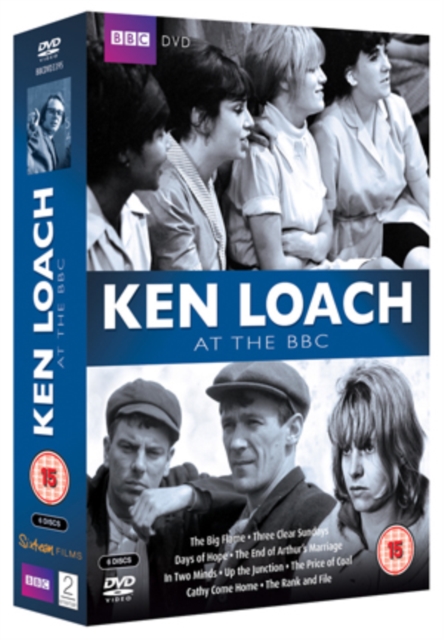 'The Big Flame' (1967) and 'Rank and File' (1971) are trademark Loach dramas, detailing with sympathy the plight of workers caught up in industrial disputes at the Liverpool docks and the Pilkington glassworks, respectively.

'Three Clear Sundays' (1965) tells the story of Danny (Tony Selby), a young man facing up to the death penalty after an attempt to help reduce the sentence of two other prison inmates goes badly wrong.

'Days of Hope' (1975) is an epic four-part series starring Paul Copley, Pamela Brighton and Nikolas Simmonds as members of a working class family whose fortunes are depicted from the end of WWI to what they perceive as their betrayal in the General Strike of 1926.

'The End of Arthur's Marriage' (1965) offers something of a departure from Loach's conventional films, an adaptation of a musical scripted by Christopher Logue.

'In Two Minds' (1967) stars Anna Cropper and examines the plight of those suffering from schizophrenia.

'Up the Junction' (1965) raised the issue of abortion, at the time illegal, and played a major role in shaping public debate on the issue.

Its influence in this regard was possibly only surpassed by Loach's most famous TV drama 'Cathy Come Home' (1966), which follows the struggles of young bride Cathy (Carol White) as she struggles to keep a roof over herself and her children in a housing system that seems constantly to be working against her.

'The Price of Coal' (1977) is a two-part drama set in a Yorkshire mining village which contrasts the humour of the working men (many played by actual comedians, including Duggie Brown) with the dangerous conditions in which they are forced to earn a living.