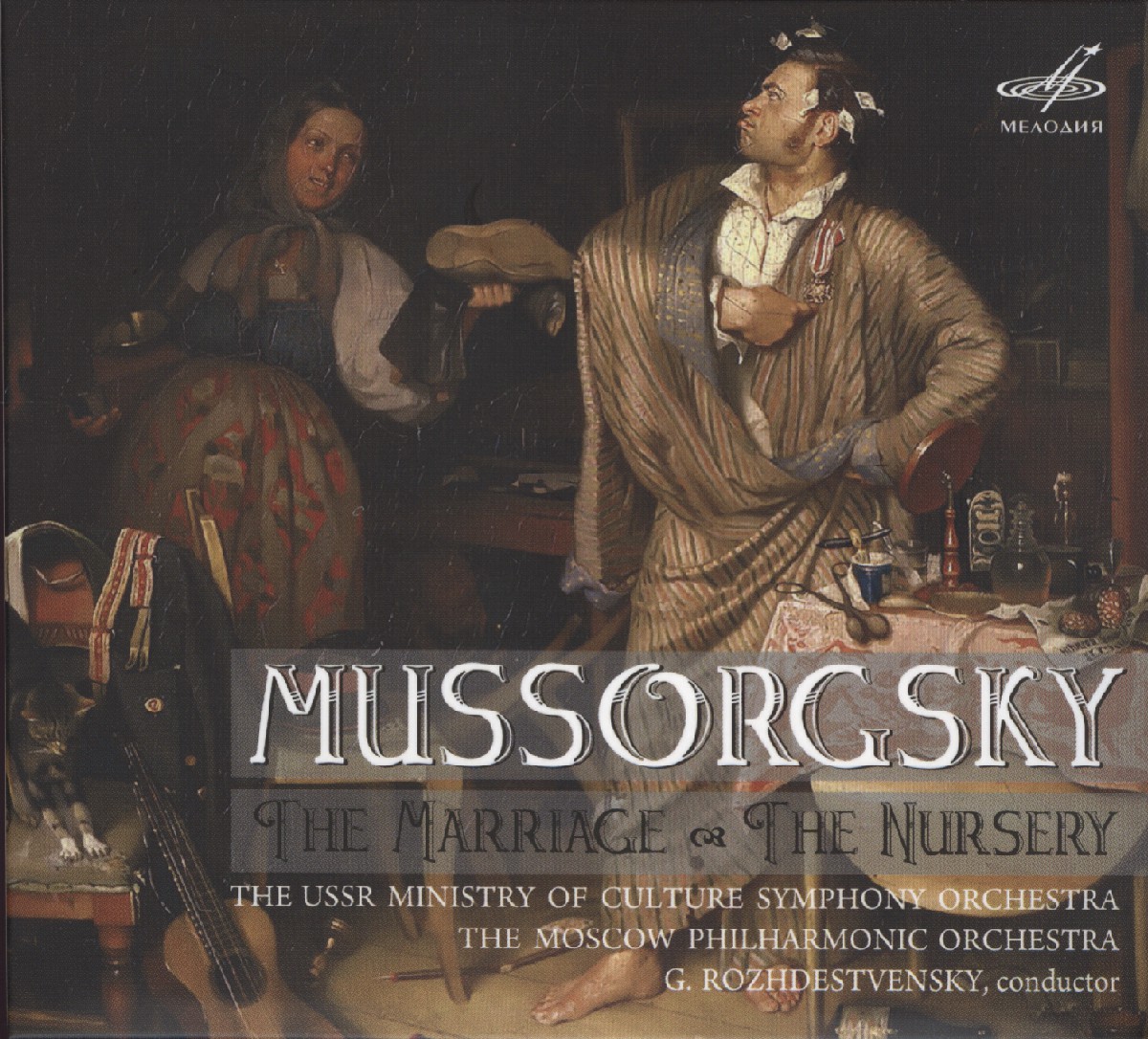 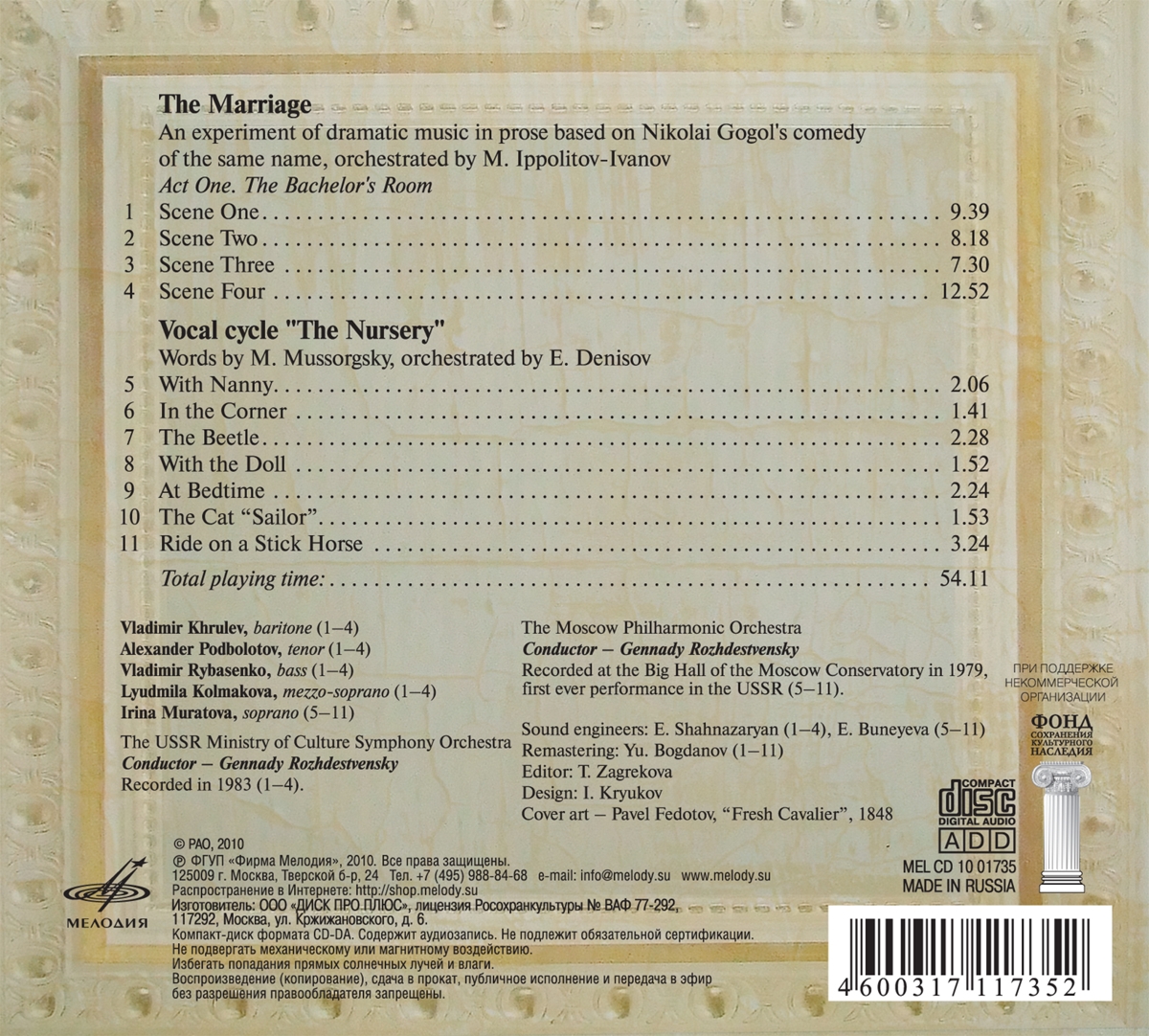 Modest Petrovich Mussorgsky is one of the greatest 'realistic' composers of the 19th century. His creative work was aimed at reaching the maximum lifelike plausibility and psychological concreteness of images, and as the composer said, "I strive to create a life phenomenon or type in a form inherent in it, previously unseen with any of the artists." It made Mussorgsky seek for new means of musical expressiveness and experiment on it rejecting the conventional academic standards and conceptions when they contradicted the peculiarities of this or that artistic task. To him, a living intonation of human speech was a major means to characterize images.

In 1868, Mussorgsky was inspired by Alexander Dargomyzhsky's work on his opera The Stone Guest (based on Alexander Pushkin's little tragedy of the same name) and decided to compose his own opera The Marriage. His task was the same as Dargomyzhsky's one – to write an opera based on an unchanged text of a literary work without editing it. However, Mussorgsky went even further – that was not poetry as it was in the case of The Stone Guest, it was prose of everyday life which had no connection with lyrical emotions and poetic characters. That 'experiment of dramatic music in prose' (as the composer put it) was truly unique.

In quest to reach the goal, the composer had to reject the expressive means of opera replacing cantilena with melodicised recitative, and, as a sequence, arias, ensembles, and choruses as historically established operatic forms. The role of the instrumental part was mainly turned into emphasizing characteristic phrases of the vocal part.

Mussorgsky viewed the work as an experiment. Its significance was defined with very much precision by the composer himself: "It is a feasible exercise of a musician, or to be more exact, of someone who is not a musician but who wishes to study and comprehend all twists of human speech as they were ingenuously and honestly conveyed by Gogol's genius."

The opera remained unfinished (The Marriage was later completed and orchestrated by Mikhail Ippolitov-Ivanov), however the single act of The Marriage was an important milestone in both Mussorgsky's career and the history of music in general. Mussogsky's finds in the field of recitative of a new type were reflected to an even greater scale in his subsequent works and also anticipated further development of recitative opera.

The cycle The Nursery became one of the masterpieces of Modest Mussorgsky's vocal and instrumental creative work. Composed to the composer's own lyrics, the cycle is an extraordinary work having no analogues. The Nursery consists of seven numbers which are neither romances nor songs. In their essence, they are miniature scenes from a childhood living where Mussorgsky opens for the listener a wonderful inner world of a child with an amazing accuracy, depth and love.

The first number of the cycle – With Nanny – was written by Mussorgsky in 1868 and dedicated to Alexander Dargomyzhsky, "a great teacher of musical truth" as the composer called him. Dargomyzhsky also was the first to hear the piece. He praised Mussorgsky's work and told him to continue it by all means.

Each scene lets the listener enter a marvellous world, a world seen and heard for the first time, watch the discoveries made by a small child, and see children "as people with a peculiar little world of their own not as amusing dolls." A melodicised recitative prevailing through the cycle surprisingly precisely reproduces children's intonations and all the finest nuances of a living children's speech overheard by the composer.

In With Nanny, a child begs the nurse to tell a kind and funny fairy-tale: "you know, nanny, don't tell me about the bogey-man."

In the Corner is a scene between an angered nanny and a punished child. An indignant nanny berates Mishenka: "You mischievous child! You unwound my clew! You lost my needles!... To the corner!" which contrasts with sorrowful and excusing intonations of the little one: "The kitten unwound the clew, … and Mishenka was a good child, Mishenka was a clever boy."

The Beetle is a child's story of something strange which happed to a beetle: "Has it died or is it pretending?"

In the piece With the Doll, a little girl sings a gentle lullaby to a doll imitating her nanny: "Tyapa, bye-bye, Tyapa, sleep, fall asleep, … the bogey-man will eat Tyapa, the grey wolf will take you to a dark forest…"

At Bedtime is a prayer: a little girl says a prayer for all her relatives and friends, mentioning everyone's name, but soon that long enumeration turns into a patter and she falters: "Nanny, nanny, what's next?", and when the nanny prompts, the child finishes her prayer: "Lord, have mercy on me for I'm sinful too."

The Cat 'Sailor' is an excited story of how a cat tried to catch a bullfinch in a cage.

The piece Ride on a Stick Horse closes the cycle: a little boy rides on an imaginary horse, but suddenly falls and hurts himself. The mother soothes him drawing his attention to a bird, and here he rides again.

Almost all the numbers have a dedication. So, the piece In the Corner was dedicated to V. Gartman, an architect and painter, the composer's close friend; The Beetle was dedicated to music critic V. Stasov who gave the title to the cycle; With the Doll was dedicated to Tanyushka and Goga, Mussorgsky's niece and nephew; At Bedtime was written for little Sasha Kui; and Ride on a Stick Horse was dedicated for Stasov's brother and his wife.

The Nursery was published in 1873 by V. Bessel and designed by painter Ilya Repin who called it a "truly wonderful thing" and won the hearts of listeners both in Russia and abroad because, as Claude Debussy rightly put it, "no one has appealed to the best that we inside of us with greater tenderness and depth."

Gennady Nikolayevich Rozhdestvensky (born 1931) is one of the outstanding conductors of the 20th century, and also a pianist, composer, researcher.

Rozhdestvensky's repertoire is enormous. He has performed and recorded all the symphonies by Haydn, Beethoven, Brahms, Tchaikovsky and many other composers. He has conducted a multitude of the world's premieres both in Russia and overseas. (melody. su)