Nick Mason: Into the Red 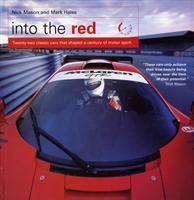 Nick Mason has had a lifelong passion for motor racing. The sports and racing cars he's chosen to own form a unique stable, not just because of their diversity, but because every car is meant to be driven, and driven hard. These are not museum pieces sitting tamely in glass cases.
With test driver Mark Hales, Nick Mason has pushed twenty-two of his cars to the limit and created Into The Red, a book which captures the power, the exhilaration and the feel of the actual cars driven by the worlds greatest racing drivers, including Enzo Ferrari, Stirling Moss, Jacky Ickx and Mario Andretti.

Some are incredibly fast: the powerhouse Porsche 935, the limited edition McLaren F1. Some extremely rare: the legendary V16 BRM is one of only three known to exist. Some highly expensive: the Ferrari 250GTO had a value of £10 million at its peak. And others are all-time classics, including the Bugatti T35B, the Maserati 250F, and the Ferrari T3 that brought Gilles Villeneuve victory in the 1978 Montreal Grand Prix.

But although their past is what makes the cars so special, each car has been put through the same demanding test sequence at Silverstone, using the latest equipment, no quarter given. The results are often surprising.

Mark Hales details the distinctive sensations, sounds and vibrations of each car's handling ability, down to the feel of the gears and the response of the brakes. Nick Mason gives his personal view of the history and heritage of each model, with the inside track on the ups and downs of collecting classic cars.